Around 10 minutes into the film In Bruges, Ken and Ray are having beer for the first time in Bruges. When he puts the beers on the table, Ray says something along the lines of "one gay beer for my gay friend and one normal beer for me, because I'm normal". 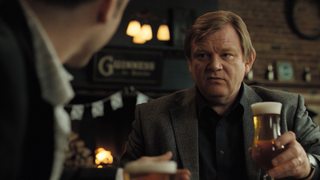 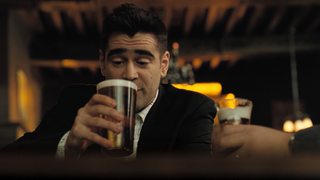 I've seen various explanations on the internet, from the volume of the glasses (they look the same to me?!), to their shape, to their content (again, looks the same?).

So why is Ken's beer "gay"? Is it the glass, or the beer itself, or something else?

It's primarily the shape and size of the glass.

If you look at the picture you've provided Ken is drinking a beer from a smaller glass (with a smaller rim and concave sides), and Ray's beer is in a glass more like a British or Irish pint glass with a wide rim and straight sides.

The volume is probably around 30% larger in Ray's glass, and more typical for a full Pint in a British or Irish pub. A full pint being the typical size of a beer ordered by an adult male in the UK & Ireland.

It may also be the style of the beer, which we don't see them order. Ken is enthusiastically enjoying the Belgian culture, so his beer may be a local Belgian style beer, which might be considered more "foreign" than Ray's. Ray might be having a more commercial, international lager available anywhere like a Heineken or Stella Artois, whereas Ken's is more gourmet (and therefore gay ... clearly).

I'm going to add this as an answer, because this is an entirely cultural device, immediately recognisable to a Brit or Irish person over the age of perhaps 40, which is one of many cues as to Ray's character; how he thinks & behaves.

It doesn't rely at all on what beer either of them chose. It's entirely reliant on the glasses themselves. The method by which each beer was chosen is not shown to the audience, as it's not pertinent to the scene.

I'm not going to apologise for his behaviour, merely explain it. Part of the strength of the movie is his culturally unaware attitude towards others. That's the way it's scripted and that's the part Colin Farrell as Ray plays, very well.

This is a clear reflection of the old British 'class system' and its echoes down the years. It has taken, and probably will take, a very long time to finally disappear, if it ever does.
In many respects, the British and Irish cultural behaviours in this can be considered equal.

Ray is a 'working man'. This is a class type, a social category, not a definition of someone's employment status. The 'working man' is by tradition and upbringing very conservative, way behind the times culturally and socially. He will get on well with his usual compatriots, who will all behave similarly. He will have grown up drinking in the same few places every week for his whole life. Those places have rules of etiquette that do not apply to the rest of the world.
This is typified by the Working Men's Club

The specific attitude that this scene reflects was at its strongest through the 60s and 70s and may have all but vanished now [My last visit to a Working Men's Club was over 30 years ago and they weren't my usual haunt even back then.]

To this cultural type, a man's beer comes in a straight pint glass.

There are some areas of the country where a barrel glass is standard, but obviously not where Ray comes from. The two glass types are as culturally different as the people who drink from them, or so each will maintain.

If a man were to only want a half pint of beer, he would get it in a smaller version of the same glass. [Culturally, this would only happen once, the very last drink of the night, if he thought he wouldn't be able to drink a whole pint in the 10 minutes allowed after closing time.]
If he were to go to the bar and request 'a half', then without irony the bar staff would ask if it was for a lady. If it was, then it would be served in a tulip or goblet glass, with a stem. If not, it would be served in a smaller straight glass.
It must also be noted that back then, ladies did not go to the bar.
I suppose it must also be noted, for an international audience, that there was no such thing as table service anywhere in the UK/Ireland at that time. There was also no such thing in these establishments as a bar stool. You go to the bar, you order drinks, wait for them, pay, then take them away from the bar. Standing at the bar if you weren't waiting to be served was a serious social faux pas, one for which you could be thrown out of the establishment. In many places, the bar was a barrier-separated area, solely for the purpose of buying beer. No hanging around. 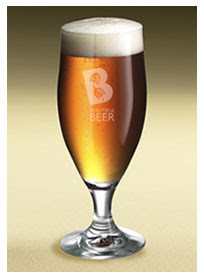 In all this, the actual type of beer in the glass is completely unimportant. In the 70's men tended to drink bitter, mild [brown, room temperature], or stout [e.g. Guiness; black or almost]. Anything paler was 'lager' [chilled, yellow/orange - that's the stuff the rest of the world just calls 'beer'; yes the UK is a funny place] which didn't really make much headway in the UK/Ireland until much later. By the time it did, then to this cultural type, they were all still just 'lager', be it a 12% Belgian Trappist beer or a can of Skol - all just 'lager'.
As the movie is set in the early 2000s, there's a fair chance that Ray grew up on 'lager' rather than bitter - and to him… all lagers are the same thing..

So… the mere fact that Ken's beer is in the "wrong" glass makes it a drink for a lady. In Ray's parlance, therefore, 'gay' beer.

Ray looks down on the quaint local culture of Bruges throughout the film, and this scene demonstrates yet another thing he dislikes: fancy Belgian beer.

Belgian beer bars are known for having a wide variety of local beers, and it looks like Ray has ordered something particularly light. From wikipedia:

Most beers are bought or served in bottles, rather than cans, and almost every beer has its own branded, sometimes uniquely shaped, glass.

Ken's beer is served in a tulip glass, which probably seems fancy to Ray, who's drinking a pint.

Ray casual homophobia fits with his tough, working class background, and emphasizes that in Bruges, he's a fish out of water.