Why is the stalactite covered with blood before Gabe lifts up his opponent against it to kill him?

In Cliffhanger (1993), there is a scene where Gabe is fighting with an opponent in a cave. His opponent seems to win, but finally Gabe grabs him and lifts him up against a stalactite which pierces his body completely and kills him.

I don't understand why that stalactite is red before Gabe lifts up the other guy. I have watched that scene multiple times frame by frame to understand it, but to no avail. To make things worse, we can view the red stalactite for a second or so, which is quite long. At least, it is probably too long to be caused by a mistake; therefore, I believe that there must be some sense in it.

I have tried to research whether there could be conditions in caves which make one stalactite have a completely different color than all others, but didn't find respective hints. Anyway, the stalactite in question doesn't just look red, but does look like its surface is completely covered by blood.

I then watched the whole fight multiple times from the beginning on to see whether one of the fighters had been injured by that stalactite before the end of the fight; this could explain the blood. However, I could not spot where this happened.

Why is that stalactite (apparently) covered with blood before Gabe uses it to kill the other guy.

It isn't covered in blood. It's just the lighting, or the prop has been stained.

To make things worse, we can view the red stalactite for a second or so, which is quite long. At least, it is probably too long to be caused by a mistake; therefore, I believe that there must be some sense in it.

If it was a mistake and noticed in editing, it is far too minor to justify the cost of a reshoot. Cliffhanger is not exactly concerned with accuracy.

However, I agree there's some sense to it. I think it was done deliberately to make the stalactite stand out against the grey background. 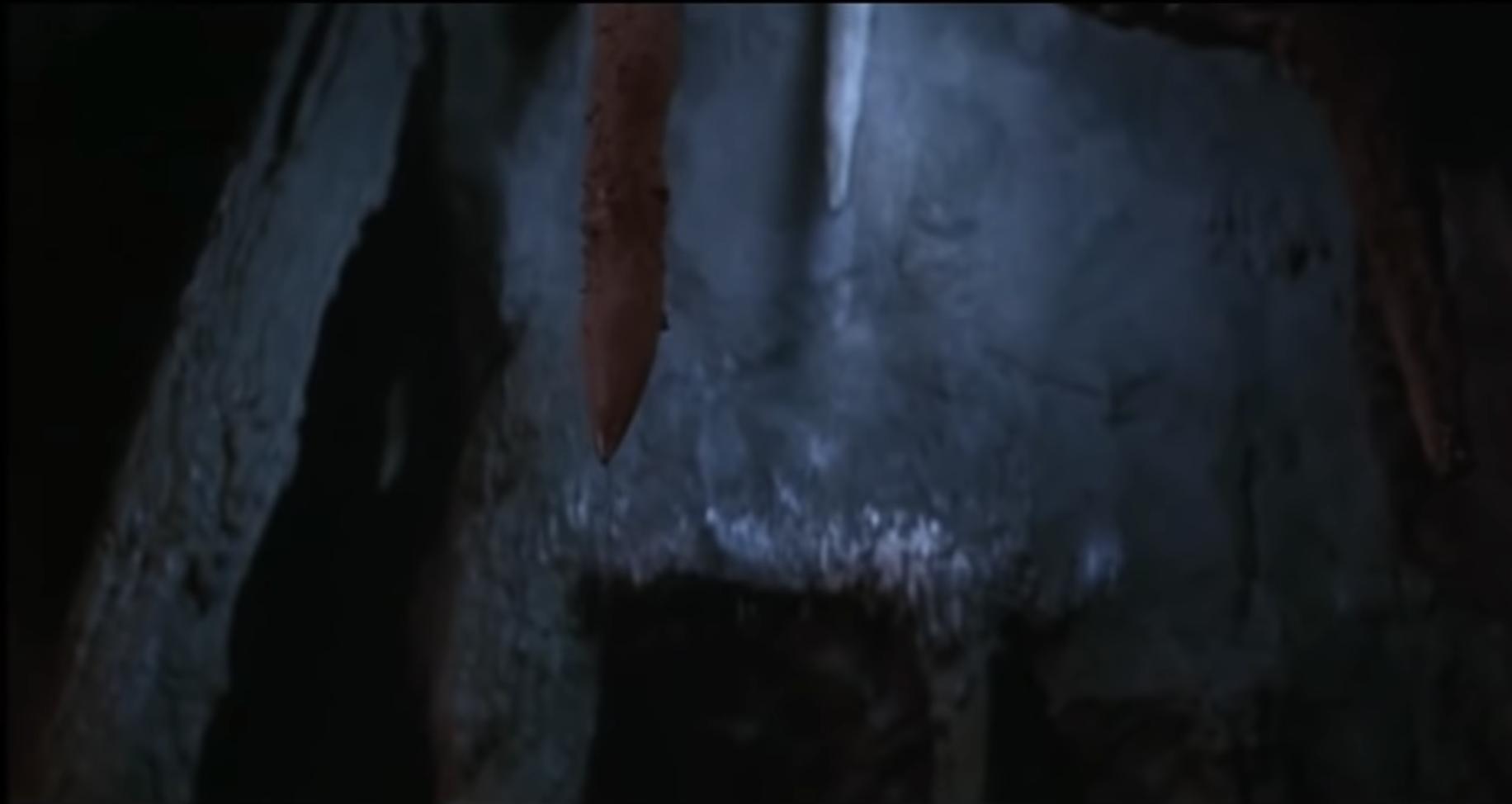 The point of this shot is to grab the audience's attention towards the stalactite. Let's consider what this shot would have looked like with a grey stalactite. My hack job is below. 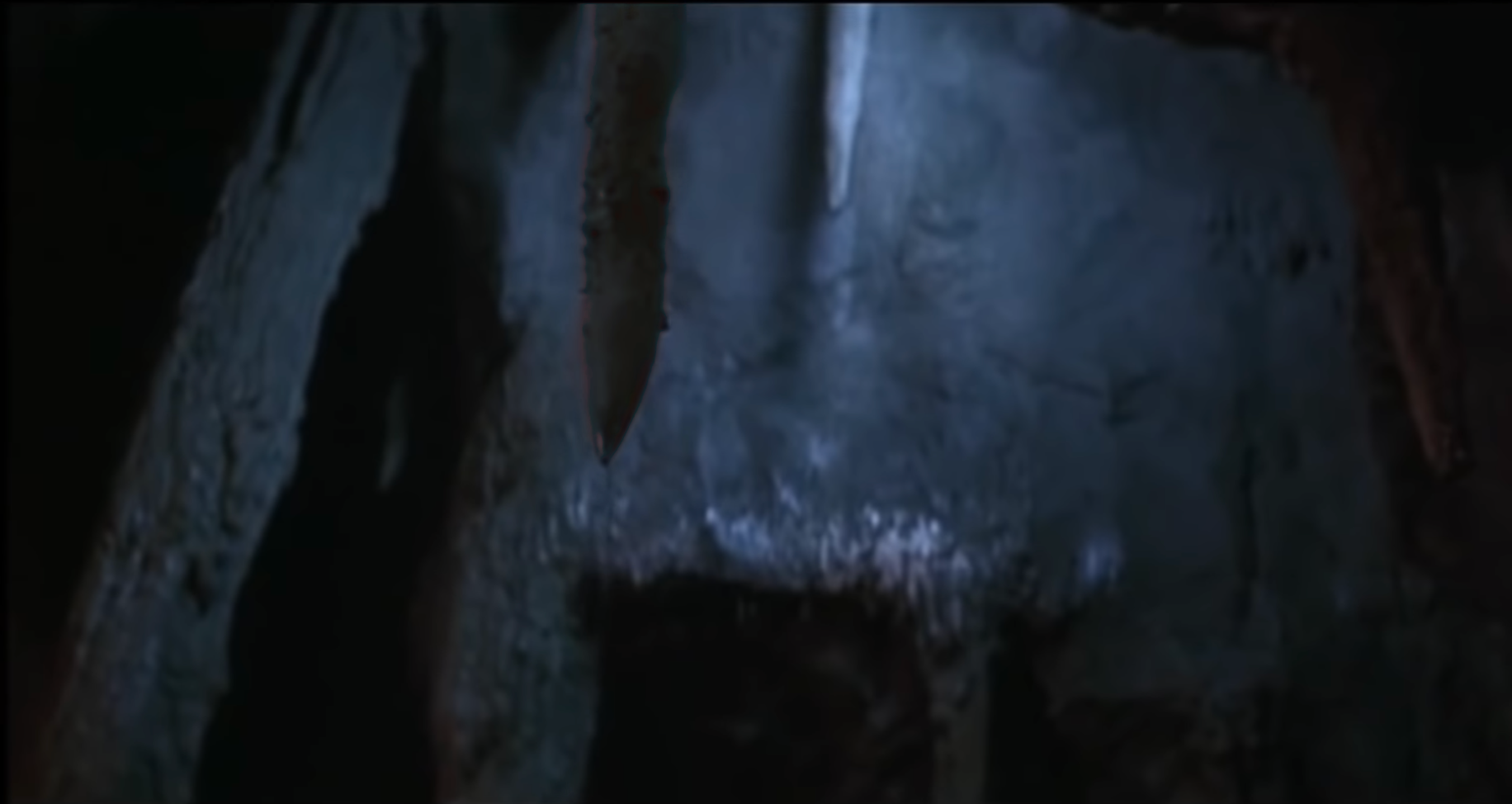 The shot doesn't work, what are we supposed to be looking at? I believe they deliberately tinted it. Alternatively, they did several takes of the impalement, the fake blood stained the prop, and they found the pink-stained version worked better.

After a cut to Kynette's face, we're in a different shot showing the impalement about to happen. Now it's grey, a continuity error, but only for a moment. This shot was likely done at a different time and location, possibly with a different prop, or possibly before they decided to tint it.

Then, goosh, there's the blood.

There is a far worse continuity error in this scene. Just before impalement Gabe lifts Kynette, no stalactite. 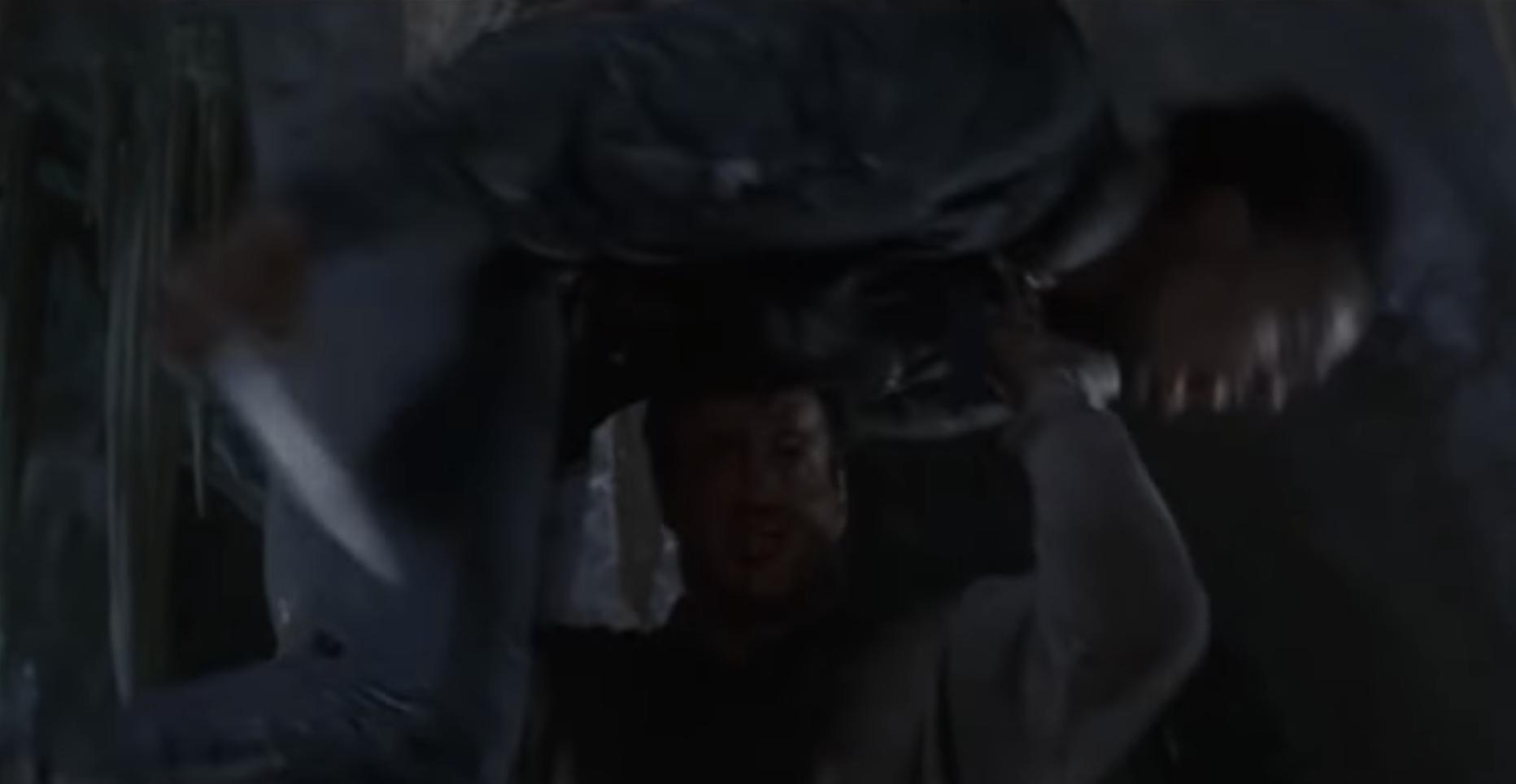 After the lift, which is all done with the arms, it's right in front of Gabe's face.

And then it isn't. 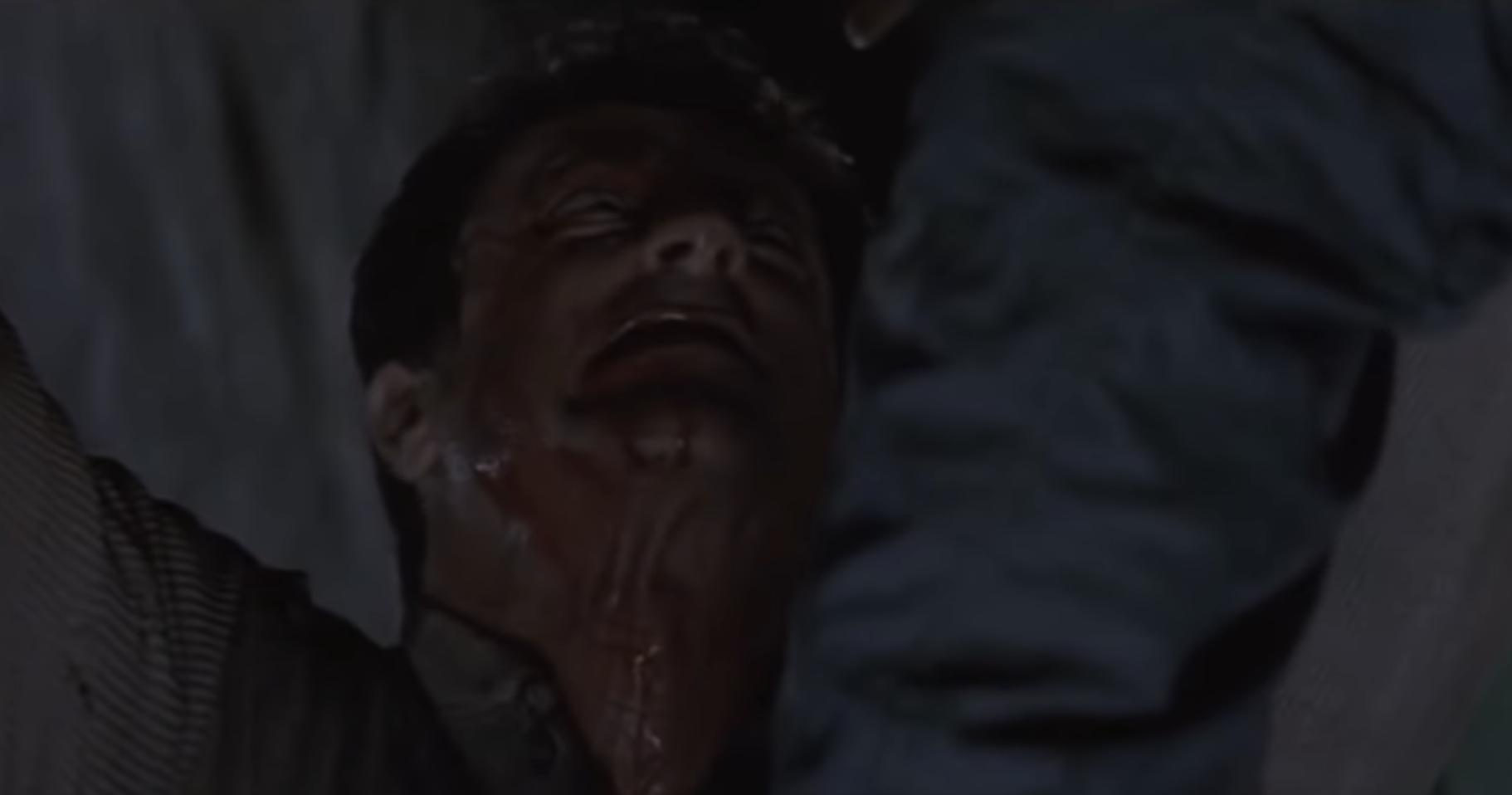 Bear in mind, that I can only work with the screenshot, since the video clip is blocked in my country.

There are 3 possible reasons that come to mind.

Stalactites are formed by the deposit of minerals over time. Depending on the makeup of the minerals, they can vary in color.

To quote this article by the National Park Service:

In the meantime, I did further research, and it could very well be a mistake. In IMDB, they even call it a goof:

When Gabe lifts Kynette to the stalactite, we see that it's already covered in blood, even dripping, before he pushes him up, piercing him to death.

The link is here.

Now I am very disappointed. I didn't notice any of the other mistakes in this movie, because I usually want to enjoy movies and relax watching them, and thus don't look for such mistakes. But that scene has always worried me.

I guess that we will never find out what was really happening. I believe that the other answers are better than this one, but I wanted to bring another opinion to peoples' attention.

Not the answer you're looking for? Browse other questions tagged plot-explanation cliffhanger .

3
Why did Grandfather insist on Albert knowing Emilie's name before giving him the horse?
25
Why did Gandalf only use his magic powers against the Balrog? Why not before?
9
Why did Frankie Marino kill Nicky Santoro and his brother with such confidence
2
What did Captain Quinlan mean by this?
2
Why did Remy show his chest when she asked him reason not to kill him?
3
Why Jedburgh kill the Senator and his agents?
9
Why would Groot protecting the other Guardians kill him?
3
Why do the police suspect Jack Reacher for Sandy's murder?
4
Why does Javert make Jean Valjean get the flag before releasing him?