Is there a significance to the different colored ink in Cassie's notebook in Promising Young Woman?

In the movie Promising Young Woman, the main character--Cassie--is shown seeking out encounters with men who think she is very drunk and then confronting them in a sober manner when they try to have sex with her without her consent. Two such encounters are shown in detail on screen, and neither results in violence. After these two detailed encounters, she is shown writing the mens' names down in a notebook, using blue or black ink. The number of names suggest that she has been doing this frequently--at least weekly--for a number of years (suggested to be 7-8 years later in the film).

While most of the names in the book are black or blue, a significant percentage are shown to be red. There is one encounter that is not shown on screen--although there is a brief snippet of the man's dialogue commenting on her hairstyle--and she writes that man’s name in red in her book after that encounter. Red suggests to me the possibility of an encounter turned violent, but this is not specified and Cassie is not shown to arm herself for these encounters or to ever have raised the suspicion of her parents with marks of violence on her body.

If there is any explanation for the different colored inks, either in the film that I missed or explained outside the film by the writer or director or someone else in the know? 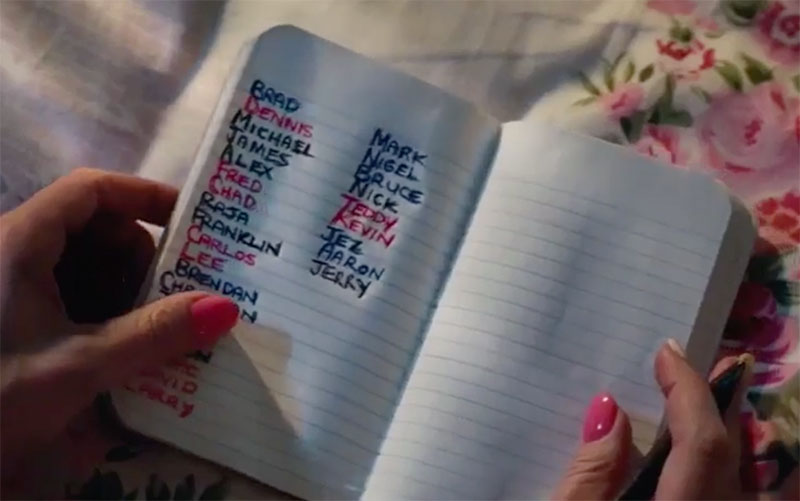 According to Carey Mulligan:

But just how far her scheme goes, whether she ever harms any of them or what exactly the different colors of ink mean isn’t answered.

“It’s just her record,” said Mulligan. “I think the colors don’t really equate to anything. It’s just her quite high school way of keeping track. And I think a way that kind of pleasantly trivializes it for her because it’s not the fact that she’s writing it in a sort of high school notebook and ticking people off. Maybe in the moments where she feels out of control and like she doesn’t know what she’s doing, when she feels like she’s been doing this for too long, it makes it feel like less of a real-world event, it feels more like a very kind of private, almost adolescent endeavor in a way.”

However, writer-director Emerald Fennell says this (in the same article):

As for Fennell’s thoughts on that notebook and its meaning?

“Never. I’ll never tell,” she said with a hearty laugh. “I mean, I know for myself, but I think that’s for everyone else to decide. Because that’s the thing, I don’t even think she even knows what she’s capable of most of the time. And you see that quite a lot in this movie, so, it really could be anything.”

Not the answer you're looking for? Browse other questions tagged plot-explanation promising-young-woman .