Why do we almost never see footage of actors later fired from a production?

Last week I got the three-disc “Complete Dossier” version of Apocalypse Now. I watched the movie and the bonus features. At one point in the bonus features someone was explaining that Harvey Keitel was at first cast to play the role of Captain Benjamin L. Willard; but after some amount of shooting with Keitel, the director Coppola decided to fire Keitel and later cast Martin Sheen in the role.

As the audio recording of this explanation proceeded, the accompanying video was not the speaker but footage shot for Apocalypse Now. For a moment I thought we would see Harvey Keitel in the role, as this seemed the natural choice to accompany the discussion. 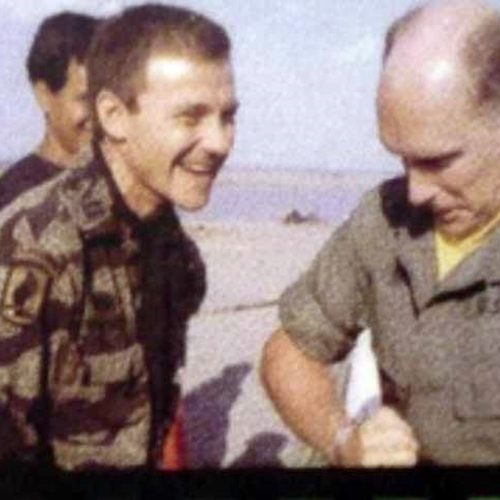 But instead, we saw the scene from the theatrical film, with Sheen in the role, in fact the same "terminate with extreme prejudice" scene included in this discussion elsewhere of the same facts.

And it started me thinking.

On DVD releases of films, it’s very common to include deleted scenes. But I think that it’s extremely rare to include footage of actors fired from the production. It seems to me I once saw it done in connection with a Woody Allen movie, but if I’m right about that I suspect it was in a separate documentary, because Woody Allen's DVD releases are strikingly lacking in bonus features. I don’t think that I can recall a single other exhibition of footage of fired actors.

Are the same issues raised in Star Wars films, when footage of deceased actors, shot during the making of previous films, is re-used? Or when technology allows the re-animation of their images?

I'm not sure if this fits the specific example you mention, but since your question is broader, let me name some reasons that might explain the observation. I've no insider information on this topic, these are just theoretical trains of thought.

Sometimes the actor's voice is not recorded well enough on set because there is too much unwanted background noise, etc. Usually you would invite the actor to re-record the lines in a studio. This is obviously not possible anymore.

I suppose the contracts contain some form of regulation pertaining early termination. The most logical way would be to pay a compensation for the work which has been already done by the actor. If the company still wants to use the actors filmed scenes in other works, like a documentary, the company needs to tell them and of course pay extra for this, since the original contract has been terminated.

Personally, I think it's a bit illogical to say on the one hand: "we don't want to work with you anymore", and on the other hand: "but please sign here, so we still can make money with your face." This is of course only valid if the company terminates the contract, not the actor. But in either case it might be hard to negotiate.

Not the answer you're looking for? Browse other questions tagged production casting .

10
Why Are So Many Actors from “Rome” in John Carter?
62
Why do mouse cursors never align with actors' hand movements (or always move perfectly straight)?
4
Why is audio so often out of sync when the actors are filmed from behind?
7
Why were the later films of The Chronicles Of Narnia never filmed?