Why is The Mandalorian shot in such a wide aspect ratio?

I've been watching The Mandalorian lately, and I noticed something strange: it noticeably suffers from some pretty severe letterboxing, even on my wide-screen display. I understand that some filmmakers do such things deliberately to make their movies not look like they were made for TV, but this isn't a movie. So why inflict such an ultra-wide aspect ratio on the audience even in its primary intended medium?

"Why" could be either…

Since many home TV screens these days are 55" or more, it gives you a greater cinematic feel, without you getting the claustrophobic quality of watching something like Cinemascope on a 4:3 18" CRT TV from the 80s.

After many comments…
*Initially I only mentioned this in passing, that their lenses are specifically anamorphic lenses. These do far more than just make the image 'wider'. They affect not just framing but focus and focus pulls, they change the shape of specular highlights and bokeh. They change the apparent depth of any shot, at any focal length. There is considerable artistic decision way beyond whether you get black bars or not. Entire books could be written on what they influence and why people choose them.

Additionally, anamorphic widescreen is not cropped to that ratio. Well, yes, it might be slightly - but the crop would be on all the monitors in production and on the camera operator's screen, so that the aspect ratio for the release would be what was shot inside that marker, intentionally. It is not just artificially cropped later to make it look cooler, it's shot that way right from the start.

According to this article:

Shot on Arri’s Alexa LF, The Mandalorian was the maiden voyage for Panavision’s full-frame Ultra Vista 1.65x anamorphic lenses. The 1.65x anamorphic squeeze allowed for full utilization of the 1.44:1 aspect ratio of the LF to create a 2.37:1 native aspect ratio, which was only slightly cropped to 2.39:1 for exhibition.

“We chose the LF for a couple reasons,” explains Fraser. “Star Wars has a long history of anamorphic photography, and that aspect ratio is really key. We tested spherical lenses and cropping to 2.40, but it didn’t feel right. It felt very contemporary, not like the Star Wars we grew up with. Additionally, the LF’s larger sensor changes the focal length of the lens that we use for any given shot to a longer lens and reduces the overall depth of field. The T2.3 of the Ultra Vistas is more like a T0.8 in Super 35, so with less depth of field, it was easier to put the LED screen out of focus faster, which avoided a lot of issues with moiré. It allows the inherent problems in a 2D screen displaying 3D images to fall off in focus a lot faster, so the eye can’t tell that those buildings that appear to be 1,000 feet away are actually being projected on a 2D screen only 20 feet from the actor.

“Our desire for cinematic imagery drove every choice,” Idoine adds. And that included the incorporation of a LUT emulating Kodak’s short-lived 500T 5230 color negative, a favorite of Fraser’s. “I used that stock on Killing Them Softly [AC Oct. ’12] and Foxcatcher [AC Dec. ’14], and I just loved its creamy shadows and the slight magenta cast in the highlights,” says Fraser. “For Rogue One, ILM was able to develop a LUT that emulated it, and I’ve been using that LUT ever since.”

Note that is merely a relevant excerpt from a loooong and extremely detailed article that offers a magnitude of technical background on how The Mandalorian was made.

One other reason they probably went with the anamorphic CinemaScope aspect-ratio is that it best-enables them to take advantage of this brand new technology they're using for the special-effects in lieu of a greenscreen, as can be seen in this YouTube video: 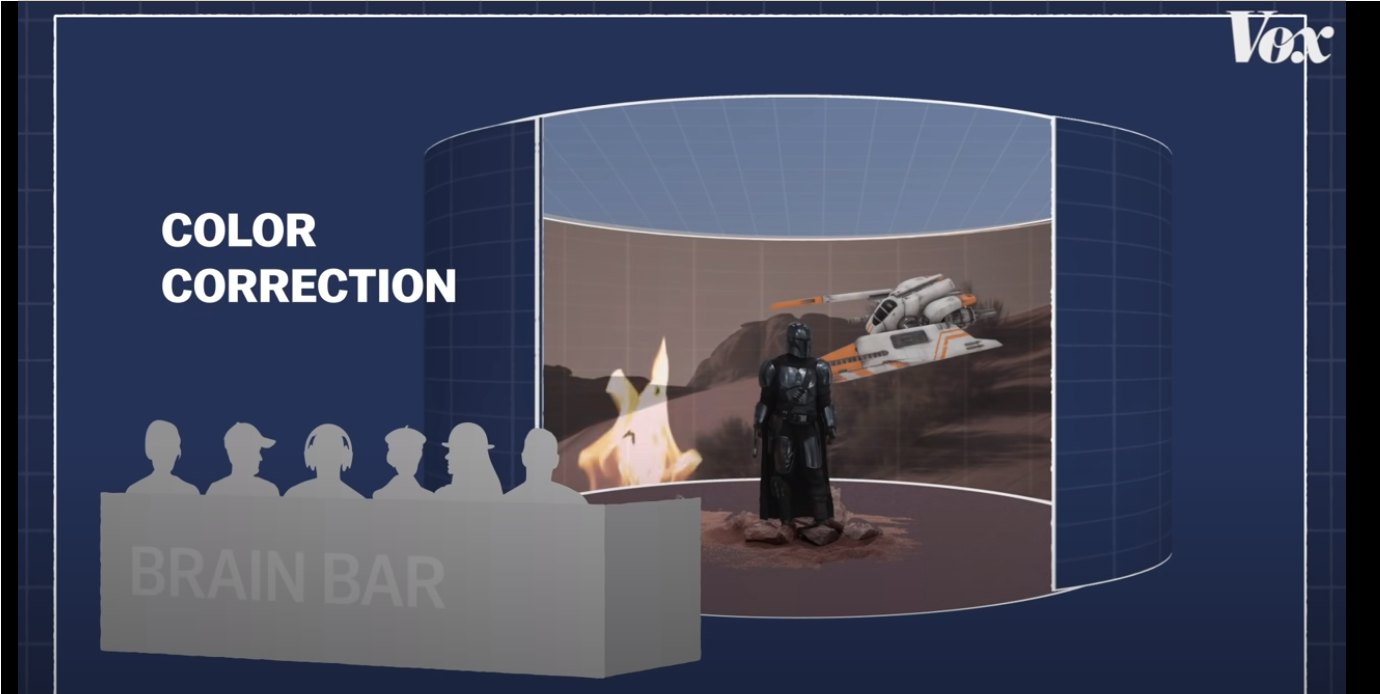 In short, they now have a cylindrical chamber that is 1 giant screen, and they play the background on it while having the actors act inside of it. With a wider aspect-ratio they can include a larger portion of the background created by the cylinder in the shot.

Not the answer you're looking for? Browse other questions tagged film-techniques the-mandalorian .

9
Are some films filmed with a larger frame than all cropped versions?
6
What is “distorting wide angle for a medium shot”?
7
What is the meaning of this question asked by the Mandalorian armorer?
23
How to prepare for The Mandalorian?
3
Is there a canonical reason that the protagonist of the Mandalorian is still unnamed?
8
What are the masks and droids in “The Mandalorian” intro?
4
What was given to Cara Dune at the end of The Mandalorian S2E4?
9
How does the Mandalorian succeed in having his face scanned?