What was wrong with John Rambo’s appearance?

In First Blood (1982) when John Rambo first comes into town he’s stopped by Sheriff Teasle. Teasle tells him, “You know, wearing that flag on that jacket, looking the way you do, you’re asking for trouble around here, friend.”

At the time, Rambo was wearing an army jacket with a waving flag patch: 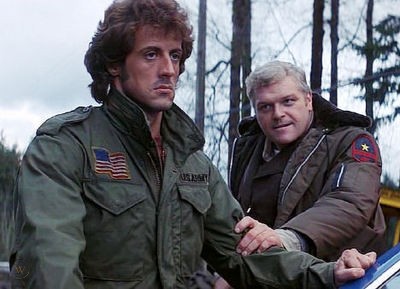 What in particular was objectionable about this to Sheriff Teasle?

John explains it when talking to Trautman:

Rambo: Nothing is over! Nothing! You just don't turn it off! It wasn't my war! You asked me, I didn't ask you! And I did what I had to do to win! But somebody wouldn't let us win! And I come back to the world and I see all those maggots at the airport, protesting me, spitting. Calling me baby killer and all kinds of vile crap! Who are they to protest me, huh? Who are they? Unless they've been me and been there and know what the hell they're yelling about!
Trautman: It was a bad time for everyone, Rambo. It's all in the past now.
Rambo: For you! For me civilian life is nothing! In the field we had a code of honor, you watch my back, I watch yours. Back here there's nothing!
Trautman: You're the last of an elite group, don't end it like this.
Rambo: Back there I could fly a gunship, I could drive a tank, I was in charge of million dollar equipment, back here I can't even hold a job parking cars!

Edit: I've read somewhere a talk with David Morell, author of the book First Blood is based on. He said that in the world he's showing, and which, to his knowledge, existed, there are two kind of veterans of the Vietnam War. One that are aware of things they have done and are ashamed and hide the fact they were abroad. And one that are raised in this very American culture of being proud for serving your country because it can't be wrong. And this is what troubles Rambo. He has, what we would call, cognitive dissonance. He can't understand how people think his involvement was wrong and bad when he did what he did for his country AND for the citizens of his country. In his book Rambo dies as a sign that everything that was wrong with the Vietnam War and that what it did to people (US and Vietnamese alike) should die too.

Along with the other 2 answers having good insights, there's another aspect that's often missed: he has long hair.

There was a strong controversy about men having long hair around that timeframe.

The "Generation Gap", or the inevitable perceived divide in worldview between the old and young, was perhaps never greater than during the counterculture era.[50] A large measure of the generational chasm of the 1960s and early 1970s was born of rapidly evolving fashion and hairstyle trends that were readily adopted by the young, but often misunderstood and ridiculed by the old. These included the wearing of very long hair by men,...

You can search for "long haired freaky people" and find all kinds of signs (literal signs) and articles about how men with long hair (even as "long" as Rambo's hair is) weren't welcome to apply for jobs. Business owners would actually hang signs in the windows of their stores saying "long haired freaky people need not apply". This was in response to the older generations often refusing to believe the younger generations who started talking about the consequences of climate change, often earning the name "tree huggers".

There's even a song about it. Well, this is one that I'm aware of, anyway.

And the sign said "Long-haired freaky people need not apply" So I tucked my hair up under my hat and I went in to ask him why He said "You look like a fine upstanding young man, I think you'll do" So I took off my hat, I said "Imagine that. Huh! Me workin' for you!" Whoa-oh-oh

This is so prevalent that HR departments still talk about it.

You’d be hard pressed to find a sign like that out today. Or advertisements seeking “Help Wanted Male” “Help Wanted Female,” or signs telling someone to use the back door.

There's still some of this discrimination going on, too. This is from 2010 and it's an anecdote, but it shows that long hair on males still isn't considered OK by some.

While speaking with the manager, Mike was told that he couldn’t work there unless he cut his hair; all males who work there are required to keep their hair above shoulder-length. Mike’s hair is long — about to his mid-back. But it is combed, clean, and well-kept.

I can appreciate the manager’s position — not wanting long hair around groceries. And Mike is more than willing to put it up, tuck it under a hat, or any other accommodation he needs to make — except cut it. But, those aren’t options for him. It’s cut it, or no job.

Mike made an interesting point – there are plenty of young women working at the store with long hair. They are simply required to wear it up. So, why is it any different for him? He says it seems a bit sexist.

When I went for a job as a high school kid in the late 90's, I had nearly shoulder length hair. I had a good interview with a restaurant manager, and he said that he liked me but to "come back after you cut your hair". I think I got it cut that night and came back to get hired. (I worked there for around 1.5 years.)

A commenter below noted that "long haired freaky people" was geared towards hippies. Yes, that's true. It's also somewhat true that hippies were generally the ones protesting the war and the soldiers coming back from it, but they weren't the only ones, and that's off topic, so I won't get into that.

The one thing that sticks in my mind is that John Rambo's character somewhat reminds me of John Lennon. He (in)famously wore an Army jacket, was a hippie, an anti-war activist, and "rebel" in general. He also wore a somewhat bushy hairdo, like Rambo does. 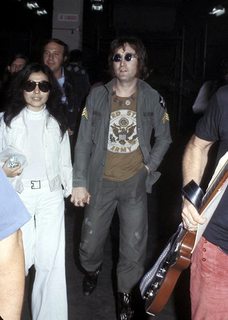 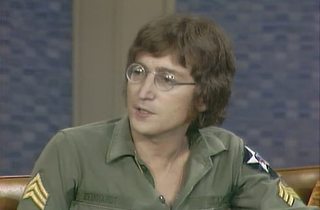 I wonder if Sylvester Stallone was trying to blur the line deliberately between a war hero and war activist? I doubt it. Would Sheriff Teasle made comments differently for a Vietnam war soldier and war activist? I doubt it. Both were considered "undesirables" and likely to cause troubles in an otherwise quiet or "boring" town, so neither were wanted.

Business owners who cared about long hair didn't really care if you were a Veteran, activist, hair stylist, accountant, bell hop, lawyer, or anything, just that you had the Counter Culture-ish long hair.

A small but important further point, in addition to the other good answers: in those days (I was there...) "having long hair" and not being clean-shaven were viewed as quite aggressive, rebellious, dangerous non-conformity. Second, quite a few veterans wore their own fatigues, and let their hair grow out, and this was viewed as dangerously heretical and probably unpatriotic. There was a pop-rebel fashion of buying fatigues at Army Surplus stores, and wearing them, to capture that "look".

"You know, wearing that flag on that jacket, looking the way you do, you're asking for trouble around here, friend," Teasle tells Rambo. He doesn’t stop there though, and does his best to make the former soldier feel as unwelcome as possible. "We don't want guys like you in this town, drifters. Next thing we know, we got a whole bunch of guys like you in this town. THAT'S WHY! Besides, you wouldn't like it here anyway. It's just a quiet little town. In fact, you might say it's BORING. But that's the way we like it. I get paid to keep it that way."

After kicking Rambo out of his car, the Sheriff leaves him with the recommendation to get a haircut and a bath - things one might do in a town like this one.

Right from the beginning, First Blood grapples with America's embattled relationship with the individuals who make up our armed forces. When they're overseas, we have to support them with magnets and bumper stickers, and flags, but once they get home, they can become an inconvenience - something we want to celebrate with a holiday or two, then forget about the rest of the year. That hasn't changed much in three decades, and Sheriff Teasle’s not-so-subtly suggesting that Rambo ought to just evaporate feels straight-up modern, ripped-from-the-headlines style.

So it was more of unwelcoming to a soldier.

The meaning of the statement is obvious if you watch the next minute or two of the movie.

The scene described in the question continues like this:

Teasle, still sitting in his patrol car, speaking through the lowered window, says to Rambo, "Headed north or south?"

Rambo looks around warily and slowly approaches the car.

Rambo and Teasle drive through town.

Teasle asks Rambo, "Where ya headed?"

"Portland is south. You said you were headed north."

"Hm. You got some place I can eat around here?"

Teasle looks at Rambo, still smiling, but it's becoming more of a sneer. "There's a diner about thirty miles up the highway."

"...Is there any law against me getting something here?"

The other answers mentioning Rambo's long hair and scruffy appearance have the right idea. The answers suggesting that Teasle has a problem with Rambo just because he appears to be a Vietnam veteran are off the mark. They offer interesting commentary about the (supposed) bad treatment of Vietnam veterans, but this does not seem to describe what's happening in this scene.

Not the answer you're looking for? Browse other questions tagged first-blood .

19
Is the overzealous and overprotectiveness of Sheriff Will Teasle as seen in the movie "First Blood" (1982) possible in USA?
7
What are the charges against John Rambo by the end of First Blood (1982)?