Okay, I'm gonna go eat this steak in the bathroom - why is it funny?

From Family Guy - Turban Cowboy [S11E15], why is Okay, I'm gonna go eat this steak in the bathroom funny?

I imagine that I am missing a cultural refernce, but internet search does not help. 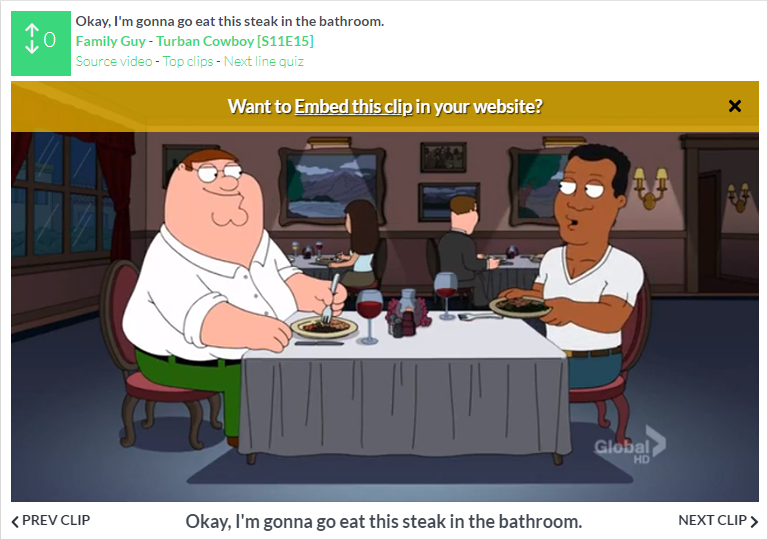 I don't think it's about race, at least not directly. It could be implying and related to them eating at a cheap steak house with poorly trained chefs. Apparently eating improperly cooked steak is known to cause diarrhea, so the joke could very well be related to eating a cheap steak making the person eating it have to use the toilet immediately.

If there is a racial component to the joke, it could be that there's a stereotype that the demographic in question might be likely to order steak at low quality restaurants where they are likely to cook it incorrectly. I'm not familiar with such a stereotype, but it's a possibility.

Note: This episode was removed from all streaming services after the Boston Marathon bombing because it contains a cutaway joke where Peter drives a van over some marathon runners to "win" the Boston Marathon. There is a transcript of the episode available, but I don't think linking to it is appropriate since it is probably not properly licensed.

Not the answer you're looking for? Browse other questions tagged family-guy .

5
Is God really a Red Sox fan?
4
Why is Brian both a dog and a human?
6
“I George Brent myself” meaning