How did the cars get inverted in Tenet?

After re-watching Tenet on the small screen there is one thing really bugging me. In the car chase sequence, there appear to be two inverted cars: the silver Saab driven by the inverted protagonist, and the black Audi that Kat is trapped in.

The question is, why are these cars inverted? Who inverted them, when, and why?

One could argue that these cars are not really inverted at all and are merely being driven by inverted drivers. But they're driving backwards, so if the cars aren't inverted then they must be in reverse gear, which wouldn't make for such a great high-speed car chase. Plus the Audi un-breaks the wing mirror of another car, and the Saab un-explodes and then un-flips, so it really seems like they're inverted.

In the case of the silver Saab, the protagonist finds it outside of the turnstile facility, so it seems to make sense that it was inverted there and then parked outside. But it doesn't seem to make much sense for anyone to do this. The inversion must have been performed after the events that we see on screen. Since the turnstile has been captured by Ives and his team*, that means they must have inverted it. This is probably the most reasonable explanation, but in that case I don't understand how Sator gets the algorithm, because the algorithm ends up in that car after the car chase (in forward time), so if that car belonged to the good guys all along then there's no chance for Sator to get hold of it.

* I was wrong about this. Ives and co capture the turnstile but then they all invert, so presumably Sator's henchpeople control the turnstile after that, Sator himself having already inverted. This is the last point in time that we see in the film, since the protagonist travels back to the beginning after that, so we don't really know what happens after it.

The Audi is a deeper mystery. In its inverted timeline, it starts off parked in the middle of the motorway during a gunfight. Sator's people put non-inverted Kat and the protagonist into it. Then (in reverse time) the protagonist pushes the brake pedal, which for some reason causes the car to start accelerating. Later, inverted Sator and his inverted henchman climb into it and drive it to the turnstile facility, where it ends up. (We see it there at the start of the sequence.) But how did the Audi end up at the gunfight in the first place, in its own timeline? Someone must have inverted it and reverse-driven it there - but who did that, and why?

My guess is that these questions don't really have answers. My feeling is that the film probably just isn't consistent on this point, and we're supposed to accept that when an inverted person drives a car it makes the car inverted, even though that isn't the case with bullets etc. But it's also possible that an explanation is hinted at in the film, and someone might have been able to spot it, so it seems worth asking the question.

The mystery is solved, at least as far as the Saab is concerned. There's a car in the red (non-inverted) side of the turnstyle facility at the end of the car chase. We never get a good look at it, but it has the right shape and the right hub-caps to be the same Saab that we see in the car chase sequence. (At around the time of this shot, the inverted version of the same car is currently pulling up outside.)

Here's a shot of the Saab for comparison: 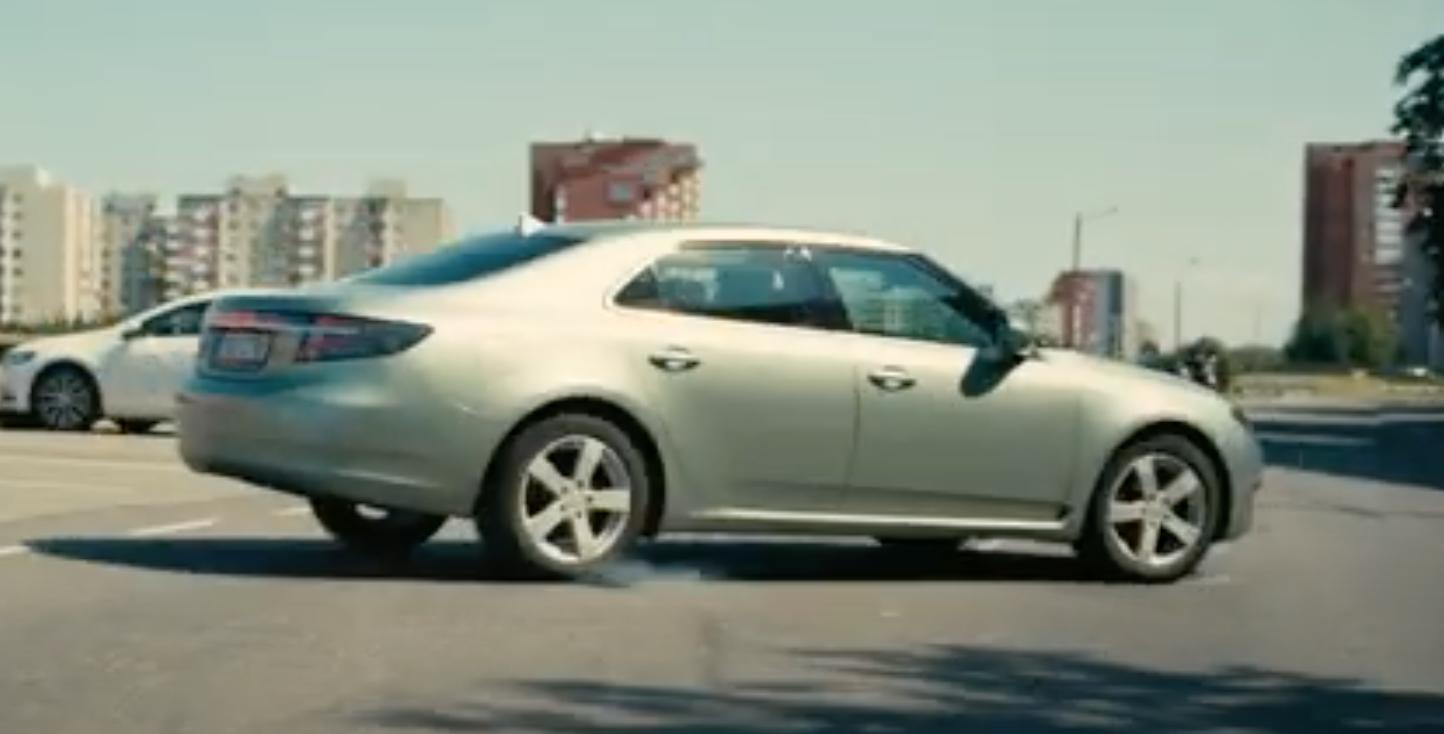 I realised that the Tenet paramilitaries don't hold the facility after they capture it - they all invert at the same time as the protagonist, leaving it empty. So we can assume that after that, Sator's people will turn up, take the algorithm from the inverted Saab, and then invert this car (which of course becomes the inverted one), thus ensuring that the events will play out as they did and they will end up with the algorithm.

The Audi remains a mystery, though.

None of the cars are inverted. Sator just has a better driver probably with more experience since they’ve been doing this since back in the USSR.

If the cars were inverted then they would continue their trajectory into the past and so there would’ve been a Lotta reports of space ship looking cars in the 50s in junk yards suddenly starting to work and driving backwards.

You have to remember that with inversion, whatever you are going to do for the next hour. Has already happened an hour ago by your reverse self

None of the cars are inverted. Releasing the brake accelerates the car and pressing the accelerator stops the car in reverse time.

12
How does Sator get the algorithm after the car chase?

5
How is the bad guy's car moving backwards while its occupants are not?
4
How did the car end up at the port after explosion in Tenet?
15
Can someone explain how Kat experienced this part of Tenet from her perspective?
2
Why is the Audi chasing the BMW in reverse?
13
What would an observer see when someone goes through the Turnstile in Tenet?
12
How does Sator get the algorithm after the car chase?
11
Why didn't the algorithm detonate when Kat killed Sator?
7
When was the gold un-inverted?