Why in "The Naked Gun" is the title of the song "I'm into something good" shown on screen?

I always found odd that in The Naked Gun (1988) the credits of the song “I'm into Something Good” are displayed on screen just after the song played: 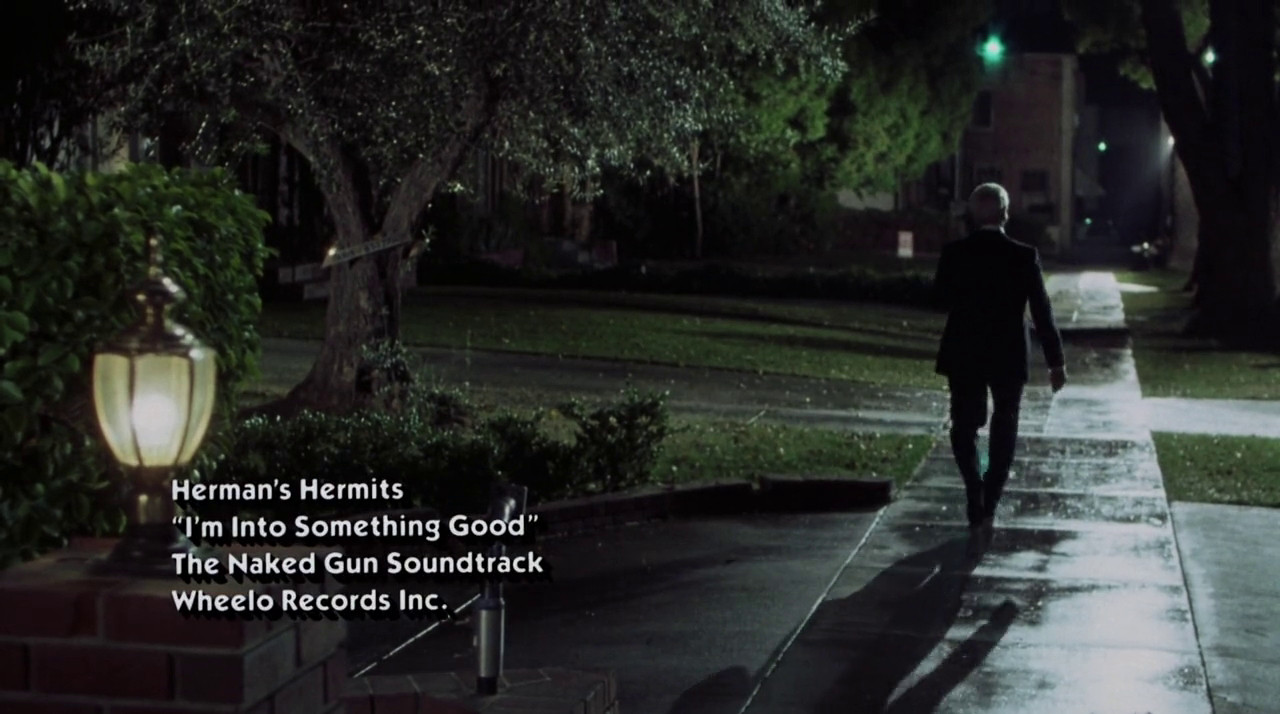 What is the reason?

Credits like those are typically shown in music videos.

The whole sequence is a very silly romantic montage that is so dominated by the song that the “music video”-like tag itself was a visual joke about how many movies have similar forced music montages in them to promote songs featured on the soundtrack albums.

The whole scene is here:

Nowadays, music videos are very commonplace. But back then, they mainly appeared on MTV in the United States and when MTV played music videos, they would tag the credits to the video just like that.

When it comes to music videos, you can’t really have “end credits” because that eats up time. But by placing that credit tag near the beginning and/or end of the video you can properly credit the artist for the song the video is associated with.

So the visual joke is — instead of straight action happening on screen — that whole sequence was like a promotional music video shoved in the middle of the movie as product placement to promote sales of the movie’s own soundtrack.

In fact, I found that exact sequence — and credit placement — referenced on page 65 of this book: “John Williams's Film Music: Jaws, Star Wars, Raiders of the Lost Ark, and the Return of the Classical Hollywood Music Style” by Emilio Audissino. Here is the relevant passage on 65; bold emphasis is mine:

“This type of unabashedly promotional sequence is brilliantly spoofed by Zucker-Abrahams—Zucker in The Naked Gun: From the Files of Police Squad (1988). We see a montage showing Lt. Frank Drebin and his new fiancée, Jane, involved in a series of clichéd romantic activities, accompanied by a merry song. At the end of the sequence, as in a MTV video, the song’s title, authors, album name, and record company — “Herman’s Hermits, ‘I’m Into Something Good,’ The Naked Gun Soundtrack, Wheelo Records, Inc.” — appear on screen, hilariousy baring the economic motivation of songs in such sequences.”

So it was a nod to the trend of many movies featuring some oddly placed commercial track smack dab in the movie so the producers could cash in on soundtrack sales on top of ticket sales — and video rentals — of the film.

Not the answer you're looking for? Browse other questions tagged soundtrack credits the-naked-gun .

70
What rules govern how TV show opening credits are structured?
28
Why do some closing credits show the character name of only one actor?
103
Why do movies still have credits?
7
Why the Angels and not the Dodgers in The Naked Gun?
3
What is the significance of the song played at the end of Tangerines (2013)?
13
What is the process for a movie getting a song written by a popular artist?
13
Which movie started the common practice of 2 sets of closing credits?