What do the three numbers used by Ramius when giving directions mean in The Hunt for Red October?

Around 28:20 in the movie, after Ramius' opening speech for Red October's mission and while the crew is singing the Soviet anthem, he gives the numbers 2/5/0 to his navigator to use as a direction.

I've seen this three-numbers system used in a lot of sci-fi and I always brushed it off as technobabble, but this is the first time I've seen it in a historical fiction that aims for technical realism, so I guess these numbers do mean something. And searching with something as vague as "three numbers", "navigation", "direction" and "submarine" isn't precise enough for Google.

Am I right in assuming this three-numbers system is (or was) used in the real world? If so, does it have a specific name and what do the numbers represent?

I believe this is just a bearing, a standard method of navigation that uses the 360 degrees of a circle, with 0 at true north, like so: 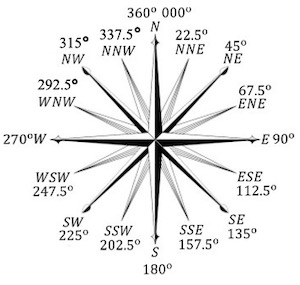 A bearing of "2-5-0" would be 250 degrees, which is roughly west-by-southwest. Saying the digits one-by-one ("two five zero" instead of "two-hundred-and-fifty") reduces the risk of miscommunications that could lead you off-course ("I thought you said two-hundred-and-fifteen!").

Not the answer you're looking for? Browse other questions tagged the-hunt-for-red-october .