Why is disarming bombs so hard? [closed]

Ask Question
Asked 5 months ago
Active 5 months ago
Viewed 429 times
4
Closed. This question needs to be more focused. It is not currently accepting answers.

Here we have a typical Hollywood bomb, which is featured with relatively minor variations in hundreds (if not thousands) of titles: 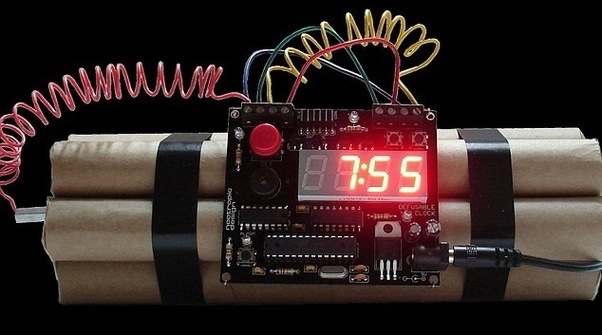 However, just looking at it, I’m confused. Why are these bombs supposedly so difficult to defuse? It seems like the hero could just pull the blasting cap out of the explosive, or cut the wire to the blasting cap. Instead, they always seem to struggle with cutting the correct wire to stop or disable the timer. But who cares about the timer if it’s no longer connected to the explosive?

I know without naming a specific title it’s hard to give an in-universe answer, but is there some out-of-universe answer, such as directors (or at least prop designers) universally not caring whether their bomb scenes are remotely realistic? Or is there some sort of agreement to show only stupidly-built bombs so that amateur terrorists will include this obvious flaw and make real bomb squads’ job easier?

Generally, because of anti-handling devices, which have at least an 80 year history in real life:

Whether it’s a time-delayed or remote detonated device, a bomber has incentive to prevent the bomb from being moved or rendered safe before it is detonated. Both military forces and terrorists have used anti-handling systems in real life.

One real life render safe technique that doesn’t make it into the media very often is controlled detonation. If a device or suspected device can be moved, it is often placed inside a container in a safe area and exploded by another device.

Since revealing techniques for defeating anti-handling devices would make doing so more difficult, it’s not easy for a writer, director, or producer to conduct authentic research on the topic. So they are left to their imaginations, which often are less technical and more focused on compelling dialog and dramatic narrative.

So just like with imagined future scientific advances and cyber security threats and defenses, bomb defusing in movies and TV usually ends up with a lot of hand-waving, impressive sounding dialog, and sweaty brows, but not always a lot of believability.

34
Why do so many movies & TV shows feature recognizable, un-branded or re-branded products?
10
Why do they sometimes not use a real operating system in films?
2
Why do some movies have photoshopped pictures of the 'family'
1
Why do newspapers in film have random article text?
7
Why is Darkman being “rotated”?
6
Why are needles pushed in so far in movies?