Why were scenes filmed on stage, even though the actors were on a set?

In the movie Goldfinger (for example, there are several "older" movies, where I observed this) there is a scene at the golf course, where James Bond, Oddjob and Goldfinger are standing next to a car, on a real set: 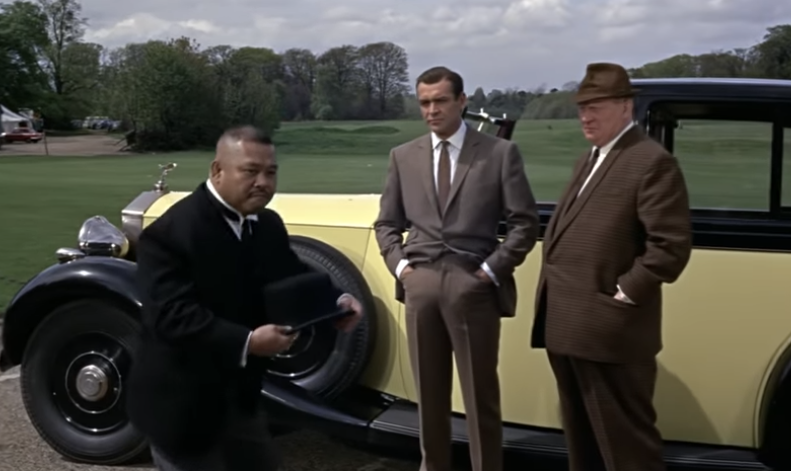 Shortly after, there is a shot of James Bond, which is clearly shot on a stage: 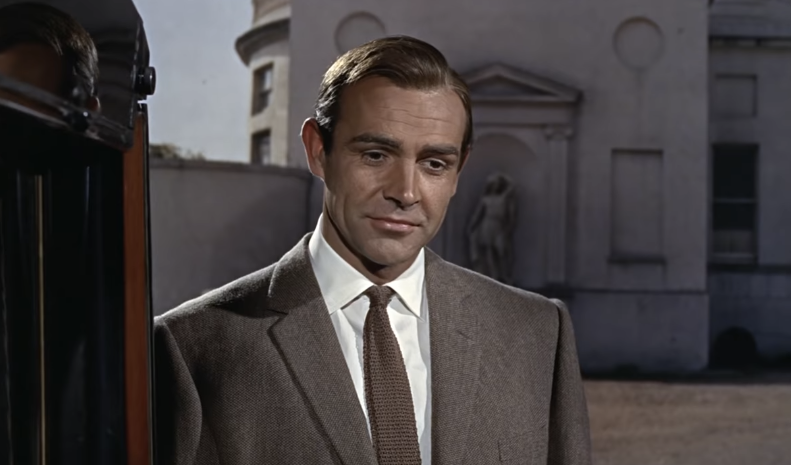 Why did they do it this way? Couldn't they just do the second shot on the real set as well?

The entire scene looks like it was shot on the same day, in the same location, but not in the order you see it presented.

In the establishing shot with Odd Job loading the golf clubs into the boot (trunk) we see the sun is left of the building and low. The main facade of that building faces North, so that makes the timing roughly early evening - golden hour.

The next sequence when Goldfinger approaches is shot earlier in the day. It's cloudy so the shadows are harder to spot, but they are pointing almost directly away from the building; so it would be reasonable to guess it was closer to midday.
Because it's cloudy, the lighting is much 'flatter' and the shot needs less front fill to keep the actors' faces in good light (we'll be coming back to that later).

By the time we cut to their first dialog we're back to it being sunny - they really wouldn't do that these days, they'd either wait for matching light or fly a large flag (light blocker) to keep the scene evenly lit.

As we then turn to Bond for his close-up, we see "Hollywood in all its glory".
50s and 60s Hollywood used to do this a lot. The big, shining smile, hero shot has a huge amount of front fill lighting, so the hero looks absolutely at his best. On the women they would also use a softer lens to make them even more alluring.
Fortunately no-one does this type of shot any more, it's just too … icky for modern sensibilities.
The fill light in this case was probably a grips carrying a reflector, as camera has to turn with the action, meaning a placed light would then be visible in shot. Camera then faces that direction for most of the rest of the scene.

The rest of that sequence, except the cut-away to the statue, is probably all done at approximately the same time. Though the sunlight does change almost every cut, the lighting angle stays reasonably consistent. It shifts between mid morning to noon, but not by more than a couple of hours - they used to shoot fast in those days.

Then we get the golf ball exchange. This is where timings get the most stretched.
Odd Job is either artificially lit from camera left, or they shot this segment earlier in the day to catch the morning sun. It's hard to tell which. The vague shadows in the background tempt me towards it being earlier in the day.
As we turn back to Bond, what we now have is a huge amount of front fill lighting to further confuse our senses. We have conflicting shadow information - the building is lit as our opening shot, golden hour, throwing shadows on the building to the right of shot; Bond is lit from high right, throwing shadows to our left, as well as by the natural sunlight putting a highlight in his hair to our left. There's also probably a reflector under camera, in the car itself, to further flatten our hero light - you can see the wood panelling on the car's interior is quite well lit.

That's what makes it look like a studio shot.

It may have to do with lighting. It's difficult to control lighting in a location and its more controllable on a set. My guess is that they use this for close-ups, so the lighting can be flattering. After all, cinema-goers often identify with stars, and no doubt producers know this and this helps with creating a franchise ...

Not the answer you're looking for? Browse other questions tagged goldfinger .