On a multicam show, who has access to the full script?

On a scripted multicam show that is shot live, such as a sitcom, which members of the production typically have access to the full script?

Obviously the writers do, since they created the script. And the showrunner and director need a copy, and I suppose the production designer also. I imagine all the regular principal actors get a copy. But who else gets a full copy?

Everybody except the 'extras' [supporting artists].
See my rant at the top of https://movies.stackexchange.com/a/111538/25773 for why this is.

The script is a part of the call sheet, which everyone [except SAs] gets.

The call sheet is 'today's bible'. It contains all details of today's shoot - the entire production list, from director right down to runners, carpenters, electricians, caterers and transport; with their contact details, email and phone numbers. Who is needed at what time, when they need to be in costume or makeup if they are a performer - transport details to get them there.

It has details of which scenes will be shot, in what order, at what times [assuming they can keep to schedule]. Which performers are needed and when for these scenes. How many SAs and what characters.

Almost as an afterthought, the scripts for each scene are tagged to the back of this, so everybody gets one.

Most of the crew needs these details to do their job. Props need to know which sets to finish dressing - fresh flowers, for instance can't be set up permanently.

Costume, hair and makeup need to know who they're expecting, what they need for each scene, anything that may need extra preparation, wigs or prosthetics.

3rd ADs [Assistant Directors] need to be able to not only get their people to set, but know where they should be at any given moment in the scene - they scribble this on the script so they can get their cues to match on each take.

Camera department will likely get a more detailed set of instructions describing how each shot is intended to look - this can take the form of a story-board, in diagrams, though sometimes just text descriptions, depending on the complexity of the shoot.
There's also a technical call sheet, which will contain details of every item of equipment needed for the day, from the obvious 'how many cameras' right down to which lenses, filters, batteries, or light stands.

Here's an example 1st page from a small shoot. This is 12 pages long. I've anonymised & shrunk, so there are no real details to be seen any more. You can just make out the first two story-board diagrams at the bottom left. the script itself is the last few pages - no point me anonymising that as it would all then just be a blur ;) 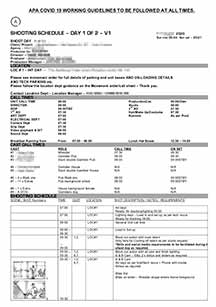 As mentioned in other QAs recently, leaks don't come from inside the industry, they come from outside - so everybody on the inside gets to see all of what's going on. This may be for just one day if you only work one day on a production. Few people are going to be handed the entire script to a major movie all in one go, but if you work it all eventually you will have an entire script.

After comments
I don't see that there's any distinction between a 'live' sit-com and any other production, single or multi-cam. Everybody involved needs to know what's going on.

Not the answer you're looking for? Browse other questions tagged production screenplay sitcoms .

15
Why are some scenes of a movie shot in public places?

10
Was the opening scene in Dark Knight Rises there in the original script?
4
Who will decide about the sequences of scenes in a movie?
4
Three Days of the Condor - communications protocols. Script vs movie adaptation
6
When movie or show script gets stolen long into filming
15
Why was Hodor renamed in the TV show?
5
Are the pranks in the TV show Impractical Jokers staged?
7
Has the prevalence of original film scripts changed?
5
Who is the guy on Abso Lutely Productions vanity card?
3
Would the full unedited film of a movie made in 1930 still exist somewhere?