Why are some scenes of a movie shot in public places?

Tetsujin pointed out in his/her answer (towards the end) about a Batman spoiler that had been leaked by public. It is one of the underlying points that fuel the question. What is the need/requirement to shoot a scene in a public place? It involves dangers like:

So, if a scene is to be shot in say Paris, on a public road, then what makes it so important to shoot there and there itself considering above dangers and ignoring above alternatives. Why would the person, who has control over this particular scene, decide to go with a public place? To achieve realism?

A studio might not have a place that would look like the road in Paris, but there is CGI. Modifications can be done with CGI after the scene is shot in a studio. After all, an entire planet (Titan in Avengers Infinity War) was made with CGI. Even if CGI is costly, then is it less efficient than having to talk with authorities of a public place, get permissions, make appropriate payments, deal with the risks and shoot in public?

I'm not really sure I should be answering this one as well ;)
I can, of course, in any answer of this type, only mention things which are "already known"

Late addition
I just spotted the opening paragraph of the Avengers leak linked in the question. It starts… "Thanks to an extra on set"
This is why 'extras' [supporting artists] have their phones taken off them at the door on many big-budget productions.
There's always one idiot who thinks it's clever to post shots to social media from on set, with scant regard for the consequences. Many SAs are true professionals who would never dream of such a thing, but the bar to entry is low, so there's always some rebel without a clue to spoil it for everyone else.
Because of this, SAs aren't trusted with any detail at all. All are tarred with the same brush, unfortunately. Many large productions have people actively scanning social media to see if anything like this escapes. Anyone caught doing this will never work in the industry again.

I'd say the two main considerations would be
1. Budget.
2. From context you won't be able to identify what is happening in the plot.

Sure, it's not cheap to film in central London [though I've never had to actually pay for it myself] but you do get some architecture it would be tough to CGI on the cheap. 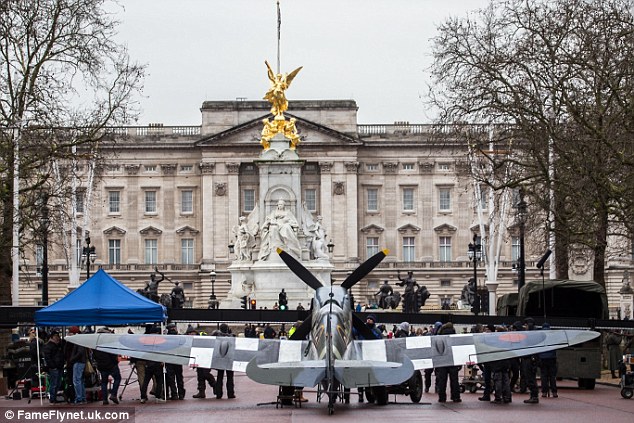 Pic (and more): Daily Mail from the show SSGB.

The Crown do actually have a small bit of Buckingham Palace built in a backlot at Elstree - but they spend a lot of time at the palace, of course… the whole show being about its occupant. I don't have pics, but you can find it on Google Maps, it's not a huge secret. When they drive into the inner quadrangle, that's all done at Greenwich.

Often, scenes are transitional, not vital to the story… 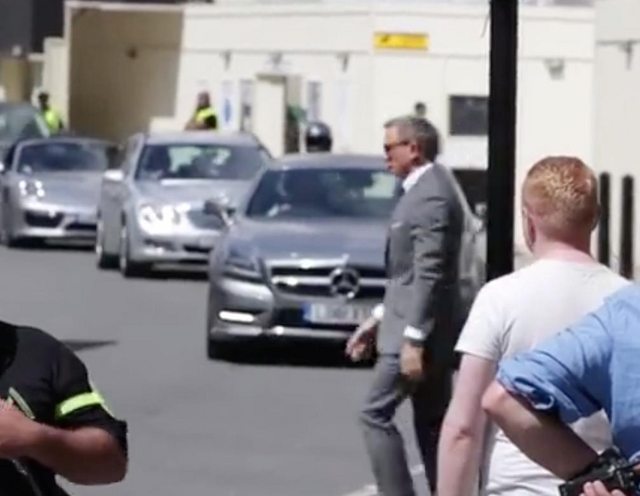 Pic again Daily Mail - yes, they pay people to follow movies around.
If you look through all the pics in the link, I don't know why they hid the number plate on the Aston Martin as a) there were two identical cars there, both with the same plate and b) they show a picture of Timothy Dalton's car further down… with the same plate.
This type of picture is almost always taken from outside the lock-down zone on a long lens, except that the paparazzo who got some of the the Bond pics [inc the one above] had access to one of the buildings inside it… so standing on private property no-one could stop him. If the crew are really bothered, security will stand in the way and wave their fluorescent jackets in front of the pap. They can't touch him, but they can try to spoil his shots. This one I don't think was worth the effort.
The earlier shots from the SSGB link above were mainly taken when they'd unlocked the set, so the pap walked through with the rest of the pubic… many, many times.

BTW, I have these saved and bookmarked not (just) because I'm a sad movie junkie, but because I'm actually in a lot of them ;) though I picked two here where I'm unrecognisable.

The Bond scene in its entirety was, "Bond gets out of his car and walks across the road to the Ministry of Defense". They used the real Ministry of Defense building.
Because of this, the only spoiler the press got was the car. The scene gave nothing away. [I was there all day too - that's my car in-shot, with me in it - and I have no clue what the scene was part of either.]

There are sometimes much bigger scenes, with car chases etc, where even trying to CGI the whole thing would be prohibitive. Again, that the public gets to see some fancy cars whizzing round the streets [and sometimes crashing, exploding] is impressive, but not really a big give-away. As the entire area is locked down for this type of shot, the only people really anywhere close are being paid to look like passers-by.

For less action-filled shots, they do unlock between takes so people can get through. Usually not cars, though, as the street will be a filled with 'action vehicles', again part of the production but looking like 'ordinary' cars. They usually do this on a Sunday.

Only if a location is needed for a long time - a month rather than a day or two - will they consider building a partial set and CGI-ing in the rest.

There are also significant 'tourist' benefits to the cities being shown in films and massive tax-breaks for the production companies. Let's say that such as Bond and Batman filming in the UK is nothing but a good thing for the industry. Liverpool and Manchester are definitely catching on to this idea and more and more big budget productions are being made up there.

There's also the 'look-alike' potential…
Manchester has an entire district that looks convincingly like parts of New York - Captain America's 'Brooklyn' scenes were shot there, amongst others. 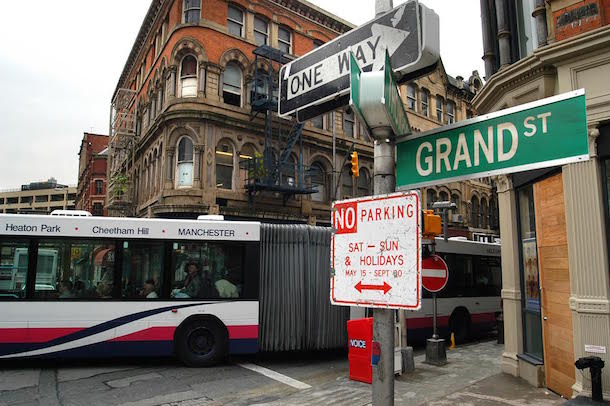 I think there will always be spoilers leaked from location shoots - but usually - and hopefully - never really plot-related.
Sure, knowing what car any famous 'driver' is going to have in the next movie is a bit of a giveaway, but not really enough to ruin anything. It might even pique interest rather than diminish it.

Edit after question edit - re Bandra Worli Sea Link…
They're really, really, really never going to let you do a car chase and explosions on a bridge like that ;)

When 'Transformers' blew up a car on The Mall, in front of the Admiralty Building during a chase, in reality all they did was drop a wheel off, so the car would drop to one corner, onto a specially-constructed dolly. All the rest was CGI.

Oh… and sometimes they cheat [not really a surprise]
Whilst trying to find the bit of car chase from Transformers, I realised part of this car chase was shot at Longcross Studios, where they have an actual real race-track that looks like country roads - 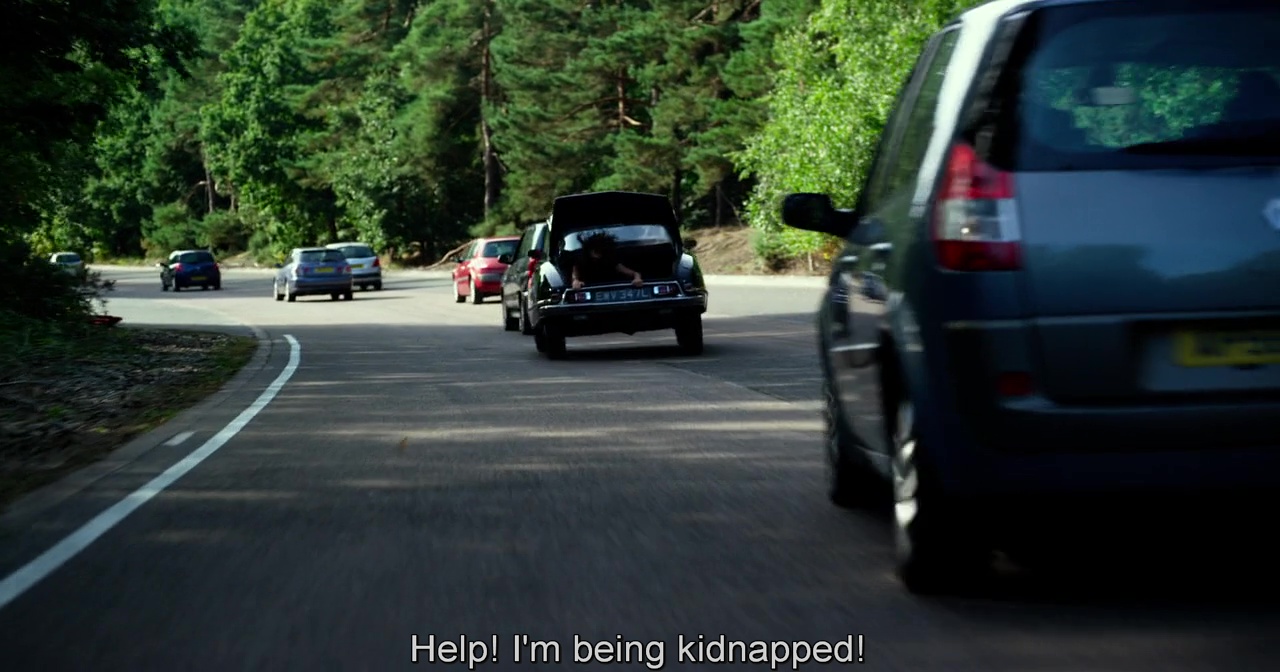 So that's done entirely inside a studio complex, on a private road.

and this is Oxford, maybe 60 miles from London… The 'copy' Bridge of Sighs in Venice.
He's also driving out of a dead-end street ;) 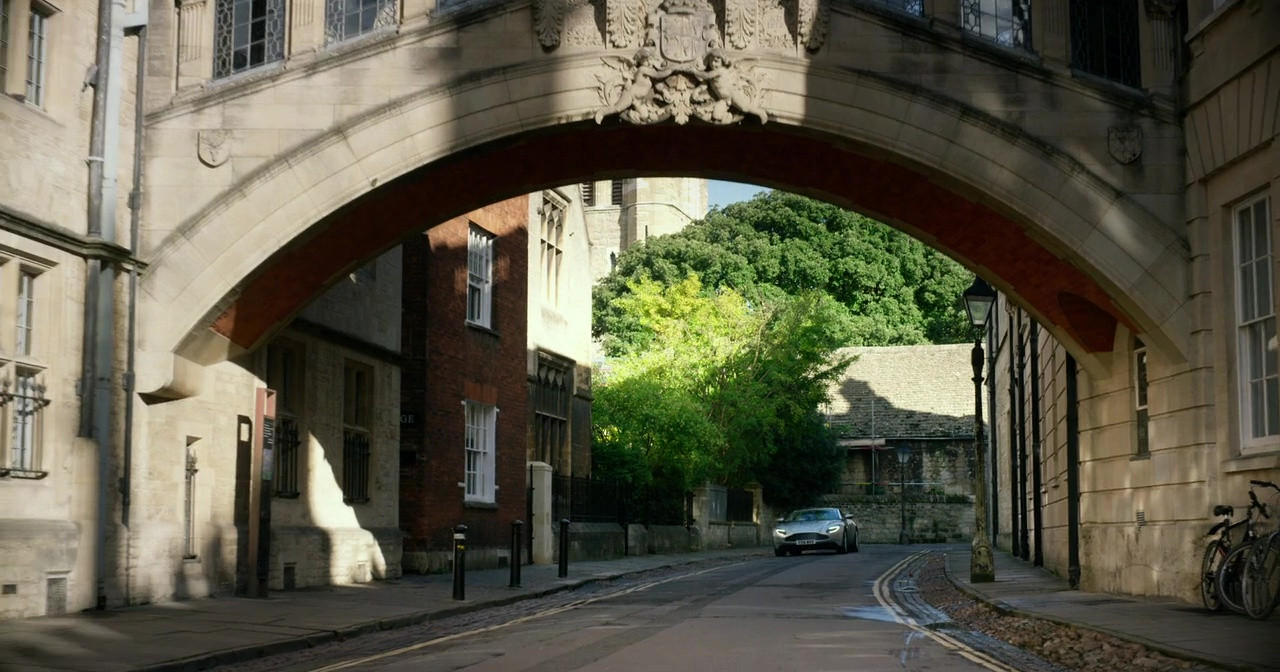 and eventually I found the Admiralty shot - 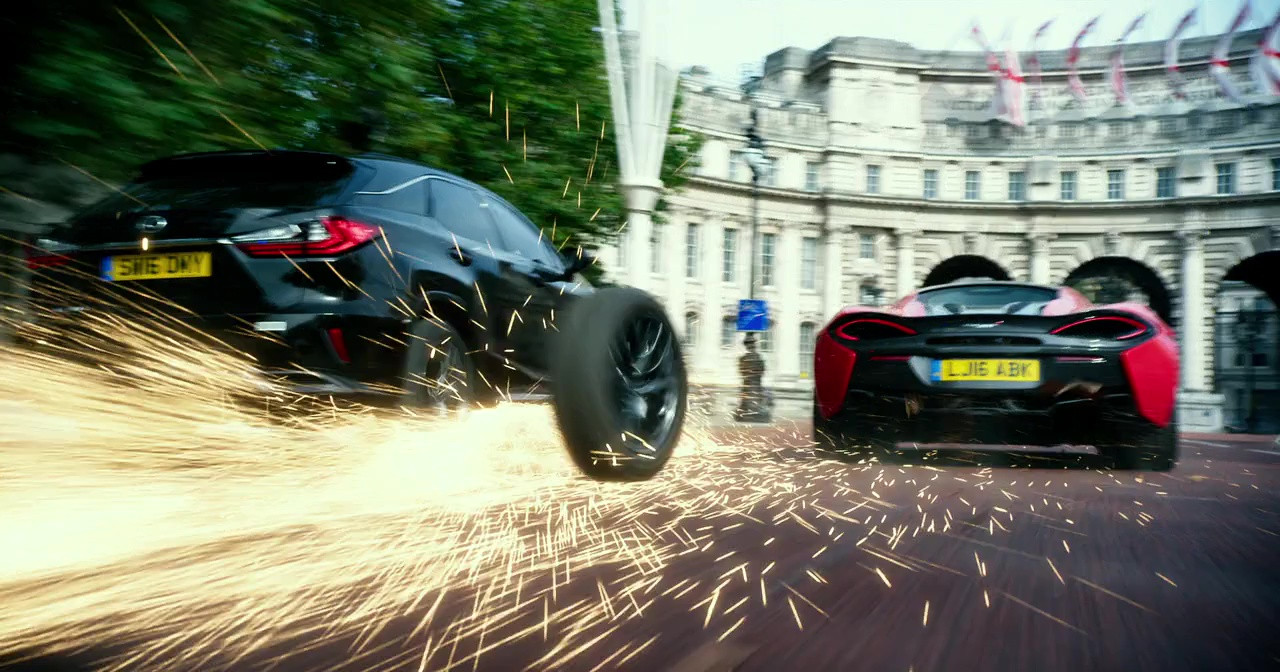 You really can't throw uncontrolled 'crashes' in front of such a building.

Tetsujin's answer is great and comprehensive but I would add about the second point in the question: "Causing disruptions in the day to day working of that public place...".

In some places the authorities in charge of managing the day to day working of public spaces are very willing to make accommodations to get films filmed there. For example, Barcelona Municipality and Catalan Government have a Film Comission tasked with attracting film crews searching for locations and easing for them the paperwork and accommodation. Their strategical goals are clear: supporting a local industry of film services and promote the touristic image of the region.

Filming in public places is disruptive, but not more than a lot of other activities that take in place in the city, like pruning of street trees, unloading heavy trucks, demonstrating, and so. Managing those activities to make them as little disruptive of possible is the job of some municipal departments and adding a few outdoor filming works doesn't make that work much harder.

I can't speak about other places, but I'm sure that London tourism authorities are delighted every time James Bond is seen in screen entering the Ministry of Defence or the Admiralty. Even paying for such a product placement would be a wise financial decision.

In some cases, free crowds.

Once I walked into a casino and there were big signs at every entrance warning that they were shooting a movie and that by continuing past the sign you were consenting to your image being used in crowd scenes in the movie.

I never saw what they were actually shooting. This was long enough ago I doubt they were CGIing the action over the crowds, but they might have been green-screening it.

40
How is secrecy maintained in movie production?
3
On a multicam show, who has access to the full script?

13
Why are some movies still shot in black and white or sepia?
8
Why are box office numbers made public?
6
Legal implications of shooting a movie along a public sidewalk with dozens of people
12
Why are movie scenes shot with green background?
3
How are scenes shot in burning buildings?
3
How do they shoot accident scenes in movies in public areas?