What are the green pills in The Queen's Gambit?

I watched the first episode of The Queen's Gambit on Netflix today. I watched it in English but as it's not my mother tongue I did not understand what are the green pills Beth Harmon takes when she's around 9 years old.

What I understand is:

With all this in mind, I still have no idea what they are. Can you help?

Just to clarify the answer:

The green pills are indeed tranquilizers:

Tranquilizer, drug that is used to reduce anxiety, fear, tension, agitation, and related states of mental disturbance. Tranquilizers fall into two main classes, major and minor. Major tranquilizers, which are also known as antipsychotic agents, or neuroleptics, are so called because they are used to treat major states of mental disturbance in schizophrenics and other psychotic patients. By contrast, minor tranquilizers, which are also known as antianxiety agents, or anxiolytics, are used to treat milder states of anxiety and tension in healthy individuals or people with less serious mental disorders.

Using tranquilizers on orphaned children makes sense, since they went through a traumatic experience of losing parents which could cause various anxiety disorders. On top of that, especially if we look at the size of those pills, such big doses would turn them into obedient, easy to command (in other words - "good") children *

The first minor tranquilizers were introduced in 1950s and indeed they were optimistically accepted by society as a cure for stress and worry, until the side effects were found: sleepiness, reduced alertness, involuntary muscle movement and (as presented in the series) the physical dependence.

In case of Elisabeth, using tranquilizers might be indeed beneficent: from the brief look at her mother, we can judge that she was not only very intelligent (young Beth holds something looking like a Ph. D thesis in math written by her mother) but also mentally unstable. Reducing this mental instability could indeed enhance her cognitive functions.

As for the brand of the drug: I am unsure is it mentioned early in the show (during Betty's childhood), but "Libritabs" or "Librium" (which was also the brand name of the drug that Beth was purchasing later on) based on chlordiazepoxide were one of the earliest ones.

* You can read a very traumatic experiences of an orphan drugged with tranquilizers for example here. So sadly, what the movie depicts is not an isolated incident from the past

The green pill is Librium, brand name for chlordiazepoxide. It is a derivative of benzodiazepine, which produces compounds such as Valium.

Discovered in the late 50s, it was popularized in the 60s. 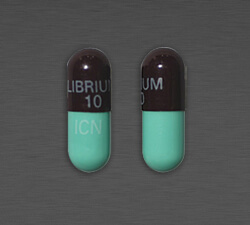 Not the answer you're looking for? Browse other questions tagged the-queens-gambit .

7
Did Cleo purposefully try to sabotage Beth?
0
Did Cleo and Beth have sex?
7
What did Beth Harmon mean by “I would say that it is much easier to play chess without the burden of an Adam’s Apple.”