Why does Jimmy send Angela to check up on Fiona?

During season 5 of Shameless, Fiona is working at Patsy's Pies. The place regularly gets visited by a woman who leaves exceptional tips, and displays a special interest in Fiona: 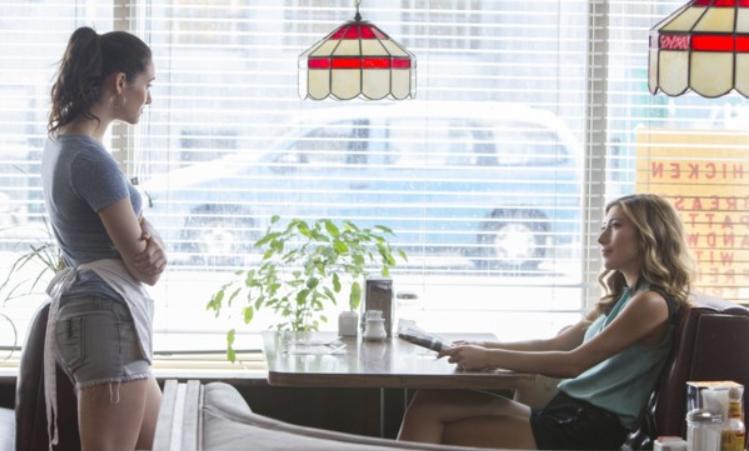 We find out she is send there by Jimmy 'Steve' Lishman - known to the woman as Jack - who sits across from her when he reintroduces himself to Fiona.

Somewhat dissentingly the woman, Angela, says "I'll let you two catch up", and leaves the place.

Why was Angela in cahoots with Jimmy; what part did she play on Jimmy's behalf in relation to Fiona?

I think that Jimmy has explained this:

Angela is his partner in crime, and although it is not explained what is he doing right this moment (or at least I don't remember that - it is irrelevant anyway), it seems that he can trust her enough to check on Fiona, his ex girlfriend.

If you remember, Jimmy was forced to abandon Fiona when he got in serious trouble with mafia - he was basically kidnapped without any chance to leave message to her. He is now too scared to just simply pop-up and say "hi" - while he might be still on the run from the mob (judging by his shady behavior), what he is really afraid is Fiona's reaction. But since he still has feeling for her (and he hopes that so does she), he has asked his "friend" Angela to check on Fiona, while he was trying to gather courage to show up in person. Coincidentally, Angela has managed to develop a small crush on Fiona as well, hence she might be doing this "checking" a tad too often...

Angela tries to flirt with Fiona but is gently rejected, so she helps her instead to meet Jimmy/Steve/Jack. Fiona eventually rejects him as well. Both criminals disappear from the series.

Not the answer you're looking for? Browse other questions tagged plot-explanation shameless .

4
Why didn't Marshall and Lily receive the check?
4
Why does Lefty say that he has to “check his lipstick”?
5
Why was Angela Moss so afraid of identity theft
4
Why does the guard not check the pastries?
5
Why does Bourne check in to Hotel Brecker?
10
Why was Jimmy so condescending (S4 EP2)
12
Why wasn't Officer Angela Lopez questioned when she killed a suspect?
0
Why does Kim Wexler love Jimmy so much?