Why did "Mulan" (the live action movie) not do well in China?

I know that Disney has been trying to appease the China CCP just to have their share of sale in the middle kingdom especially for their customized Iron Man.

I heard that the initial audience study of Mulan (live action) did well in China when they showed it to a test audience. Why did it fail? Shouldn't the Chinese audience have been proud that a Hollywood studio finally made a Chinese legend film?

The simple answer: A better, more accurate version of the legend was released in China in 2009. The Disney version strayed far from the legend, and featured implausible action sequences.

The Disney story is said to be influenced by Maxing Hong Kingston's "The Woman Warrior". This book was panned by Asian American scholars as "a distorted view of Chinese culture: one that is partially based on her own experience, but mostly fictional." To paraphrase the Wiki for the book:

Benjamin R. Tong stated, based on The Woman Warrior's fictionalized elements and inaccuracies about Chinese culture and history, that Kingston manipulates her white audience by giving them what they think is Chinese culture, which in reality is only a caricature based on Western stereotypes of Chinese people.

There was also a bit of friction from Hong Kong citizens, when the movie’s star, Liu Yifei, said she backed the city’s police, who have been criticized for their use of force against pro-democracy demonstrators. Additionally, one protest tweet indicates:

You know, the place where the cultural genocide is happening.

They filmed extensively in Xinjiang, which the subtitles call “Northwest China”

I heard that the initial audience study of Mulan live action did well in China when they did the test.

Shouldn't the Chinese audience be proud that a Hollywood studio finally made a Chinese legend film?

Probably. If they had gotten things right.

Mulan (both the original animated version and the live-action version) never did well in China.

The amount of historical inaccuracies in the live-action Mulan is ridiculous.

Hollywood still has lots of work to do, casting all Asian actors and actresses in a movie does not automatically make Mulan a good movie.

Taking a piece of Asian culture and giving it a Hollywood make-over does not always work, it has had its successes, e.g. The Last Samurai, and failures, e.g. 47 Ronin.

Hollywood anticipated that using a "serving your country" theme in Mulan would appeal to Chinese audiences, but they got it very wrong. For more details, there is a very good review of this movie on YouTube by Accented Cinema, by the title of Mulan: A Case of Failed Empowerment. I could not put it better myself.

TL;DR: I'd argue the main contributors are (a) the pandemic, (b) being released in competition with multiple other Mulan movies, and (c) the westernized Chinese culture.

An obvious factor here is the pandemic. Many cinemas in China had been closed for months, and when they reopened, seats looked like this: 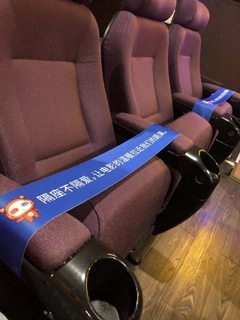 A photo I took of cinema chairs in a Beijing cinema on the 24 July 2020; we can see social distancing regulations. Different cinemas had different regulations, and they eased up over time.

I saw 花木兰 on the 12 September 2020 in Beijing, and the social distancing requirements had eased since then. However, I feel people were not in a "business as usual" mindset: they still felt it was unsafe to go to the cinema, and people were cutting back on luxuries.

A second practical factor I think is important is that there were multiple Mulan movies released this year. In fact, when I first heard of the "new Mulan movie", I thought it referred to Matchless Mulan 无双花木兰 (full movie) which appeared a few months prior. The animated Kung Fu Mulan 木兰：横空出世 was advertised at the same time as Disney's Mulan. Furthermore, movies are easily accessible in China without going to the cinemas, e.g. through an Internet TV, or through downloading them off the Internet (although this was the same for prior movies).

(There was several political controversies at the time, but I expect these were just minor issues.)

I'd also guess that having an all-Chinese cast speaking English to one another is also off-putting for Chinese audiences.

Not the answer you're looking for? Browse other questions tagged reception mulan-2020 .

2
Is it just a coincidence that five Mulan movies were released in China this year?

44
Why does 2001: A Space Odyssey not provide an explanation of its ending? Are we supposed to read the book?
11
Did the marketing of Terminator 2 actually spoil the movie?
27
Did The Revenant movie team kill animals for the movie?
67
Why is the 'You talking to me' speech from the movie 'Taxi Driver' so famous?
38
Why is the word "China" avoided in "Mulan"?