What is the meaning of pin the KGB-resident gave Nina?

In The Americans S01E12 what sort of pin did the KGB-resident give Nina after she swore the oath? What was it's significance and meaning (rank-insignia? "shield"? medal/order?)? Was it the KGB-symbol? It looked like a star with a through/behind...

It's definitely the KGB logo: 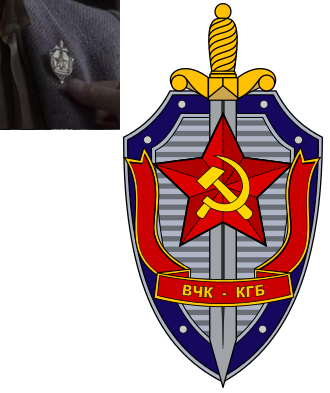 That little picture on the left is the pin, on the right is the KGB logo from Wikipedia. During the scene, she's being inducted into Directorate S. Some Googling lead me to this paper, part of the Cold War International History Project Working Paper series:

Directorate S was the most important branch of intelligence, namely the Illegal branch.

This handy page helps explain some of the terminology. "Illegal" here sort of refers to the 'legality' of the spy. In the show, the protagonists are undercover agents, and illegals, as if they're caught, then they're going to be convicted of breaking laws. Nina, and the staff at the embassy, are "legal" as should they be caught, their official cover provides diplomatic immunity, which prevents them from being arrested and convicted by the US.

In the show, the dialogue, and the 'Directorate S' terminology provide us with the understanding that now Nina is a higher up in the KGB section that deals with Illegals (i.e. the Jennings). So this puts the Jennings in greater danger, given Nina's double-agent status.

Not the answer you're looking for? Browse other questions tagged plot-explanation the-americans .

11
What gave Caincross away in the Imitation Game?
3
What does the end of Nina Forever mean?
2
Who gave the Invisibility Cloak to Harry Potter?
23
Why did Darth Sidious wait to execute Order 66?
3
What is the context of the garages in The Americans?
2
In season 5 of The Americans, what was the Russian TV show shown?
22
What gave Harry Potter the idea of writing in Tom Riddle's diary?
0
What's the meaning behind Khan's firing on the Enterprise as it approaches the Mutara Nebula?