How do they get very young child actors to cooperate?

In films and TV episodes where the script calls for very young (toddler/pre-school aged) child actors in various scenes (doesn't matter the genre, I'm just asking generically), how do the studios or film crew get the kids to cooperate for the scene?

At that general age, it would be particularly hard to get a kid to want to even look in a particular direction for very long. Let alone cooperate for a whole slew of scenes/episodes.

Are there particular schools the kids are sent to ahead of time? Or is it just a mess of multiple takes/retakes until that "miracle" happens and the director gets the shot they want?

I don't know the specific laws for other countries, but in the UK, children under 5 can only be "at work" for a maximum of 5 hours a day, between 9.30 and 4.30. This is from the moment they arrive into costume or hair/makeup at base, not when they get to set.
One child takes at minimum two, if not three or four, supervising adults - a chaperone (a professional who does this for a living), and one or two parents, who usually have not a clue what's going on. A lot of the day is spent keeping the parents fed, watered and amused as they look after the child, meaning a runner will often be assigned to them too, to fetch and carry. This small entourage will move as a single unit for the whole day.

The child is only allowed to be on set for 30 minutes at a time, with a total maximum of 2 hours on set per day. Additional breaks can be taken at the request of the chaperone or parent.

So, you bring the child in at the very last possible moment, onto a set with perhaps 100 other people - total strangers to the child. Also bear in mind that the set might be an ordinary living room... which only has three walls and a whole gantry of lights above an open ceiling... built from plywood in a massive open space which is mostly otherwise in darkness; vaguely revealing other strange wooden boxes off in the distance. Not exactly an ordinary situation to be thrust into.
If there was time, they have been introduced and had a little 'getting-to-know-you' time with the principal actor they need to interact with.

You then have 30 minutes to get them to do the one thing they are needed for, in sync with any other relevant action and dialog the adults need to perform.
You cannot overrun. Someone will be timing this to the absolute second, from the time they entered the studio. This is serious.
It can take something like a minute or more to get from everyone ready to go to actually calling "Action". All the precursor of calling the roll, hearing everyone's 'rolling/speed' responses from camera and sound, slating each camera, getting the camera op's opening shot 'set' and then all you need is the kid to behave for just 3 seconds… on cue.

Anyone who thinks a child under 3 will concentrate for the 3 seconds they appear in close-up hasn't actually tried to do this when there are 100 cast and crew around them, with some poor, overworked chaperone and the kid's mum, waving teddies and forced-cheerfully shouting "Over here, cherub! Look at the bunny!" in an increasingly frustrated manner... whilst the crew just keeps on rolling, in the hope they'll get one eventually.

A couple of pics of random sets - just to give an idea of how daunting it may be for a small child thrown into this situation. Movie sets do not meet anyone's definition of 'normal'. An adult will rapidly acclimatise, a child less-so.
There's too many people, too much dark; you can't see out past the lights, too much weird, too much distraction. 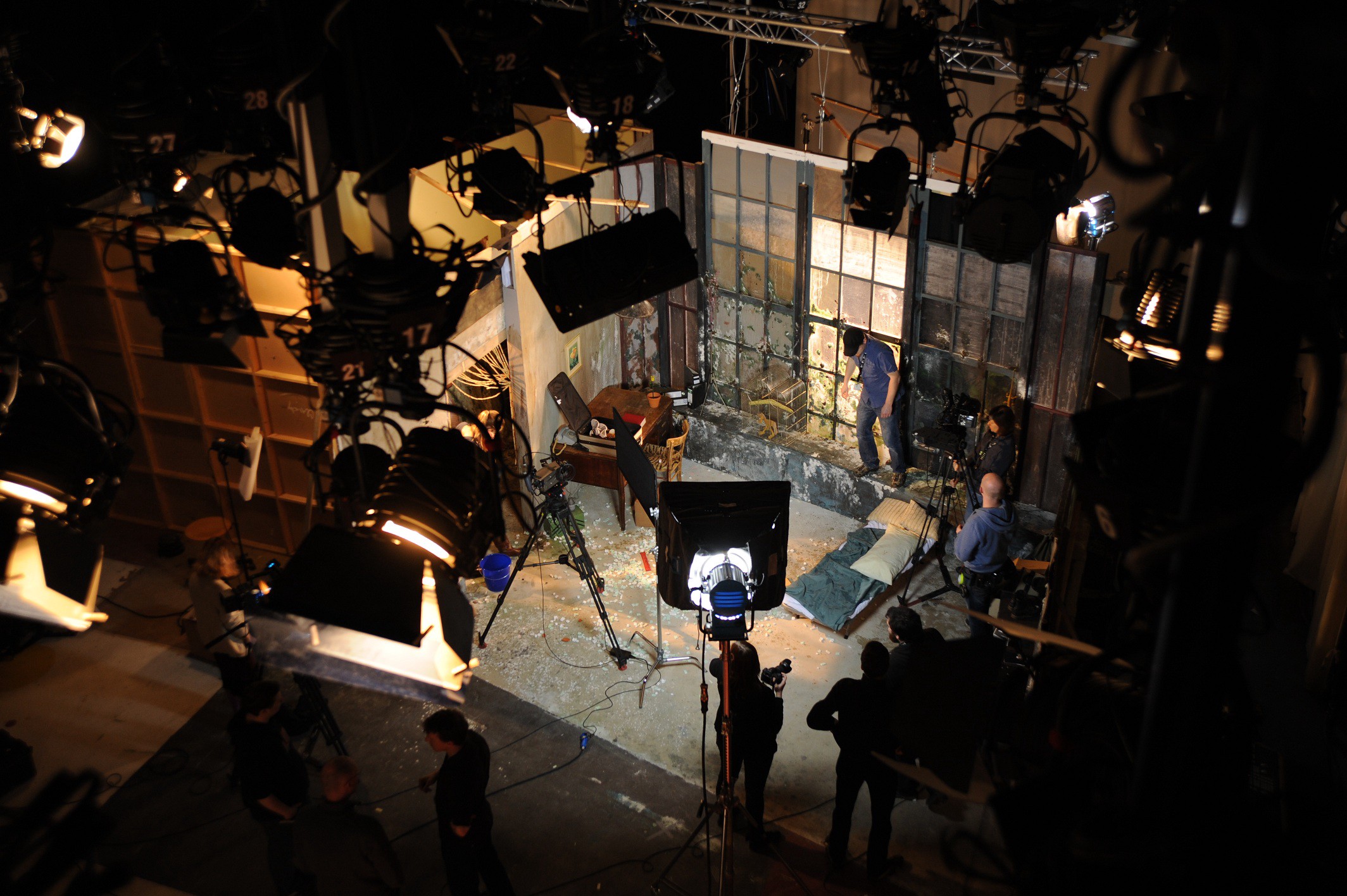 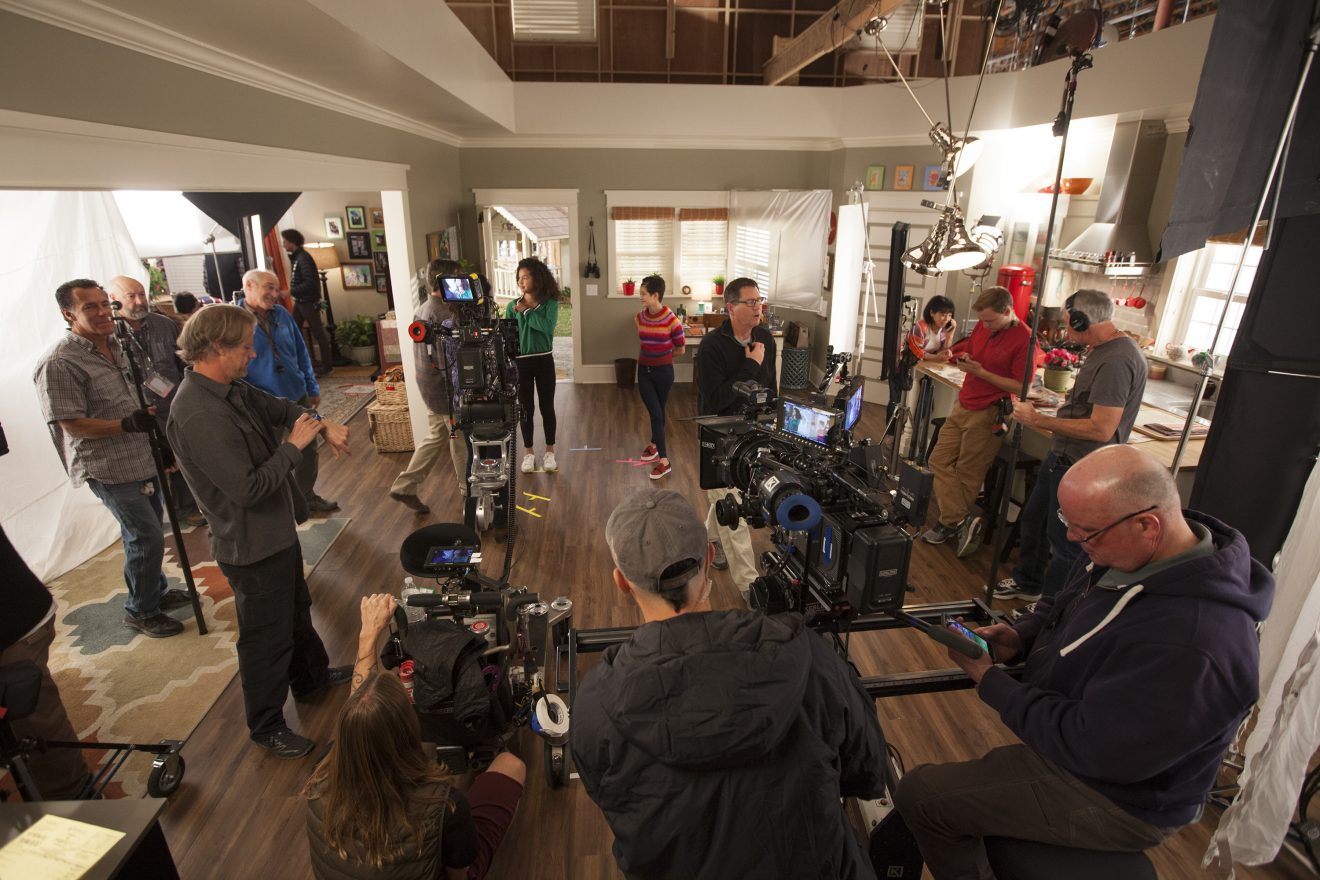 ...and all this is after the journey they took to even get to set - this Daily Mail article from a few years ago has some aerial shots of some of the large London studios. It can be 10 minutes' drive from one side to the other. Can you imagine one minute you're walking through what looks like a field of scaffolding poles, then you're in King Arthur's castle... 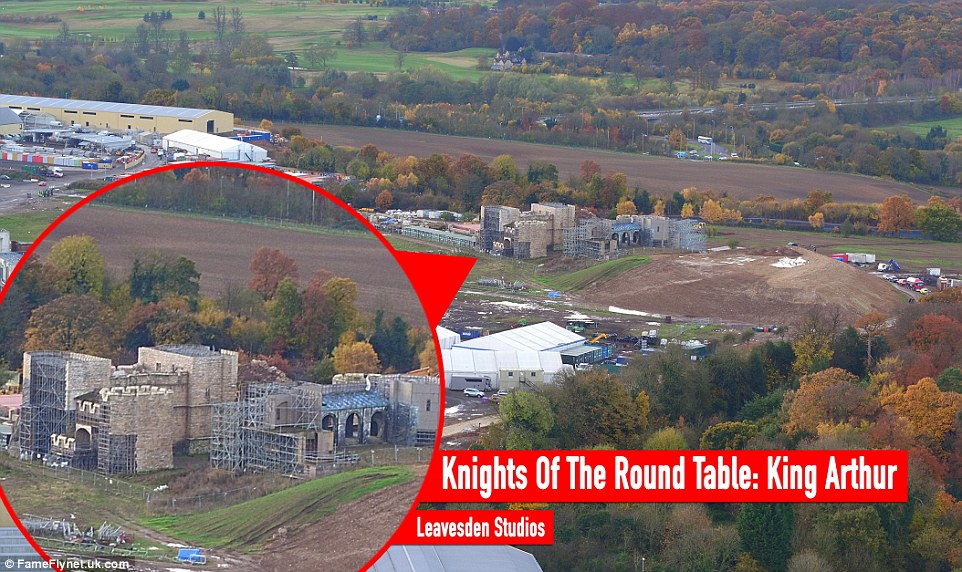 As WC Fields would say, “Never work with children or animals”. They are unpredictable and the steal the scene.

A photographer friend of mine once said that timing is everything. You can direct adults in order to get a great shot. With children and animals, they direct you. You just have to be ready to get the shot when the moment strikes.

I have heard interviews with movie directors where they explain the reasoning behind using multiple children (if young enough to pass for the same child) or twins in movies. They determine early which child has which specific dimeanor. Then, they use the child that fits a specific scene. That, combined with the labor laws limiting the amount of work each child can do, makes it almost essential to have multiple children play the same character.

My memory is that a number of play scenes in Kindergarten Cop (1990) with Arnold Schwarzenegger were filmed unstructured, simply with the kids left to be kids and the actors given 5 guidelines:

(director) Ivan Reitman invented the five "Reitman Rules of Filmmaking" for the kids: Listen, act natural, know your character, don't look in the camera, and be disciplined.

In reality, the kids loved Arnold Schwarzenegger . They were constantly climbing all over him like a jungle gym.

Later on the cutting room combined the hours of playtime into the various short segments required for the movie.

Upshot: one technique is let kids be kids and take what footage you can get. Odds of a good shot can be increased by recording all the time, and with as many small cameras as possible.

Not the answer you're looking for? Browse other questions tagged film-industry crew child-actors .

5
How do they decide what/who gets nominated at the Oscars?
6
Do different major Hollywood studios have distinctive styles or signature elements in their filmmaking?
8
How do (famous) actors apply for a movie character?
4
How do they decide Blu-ray/DVD release date?
5
How do they count box-office grosses so fast?
8
Do actors get paid more to do their own stunts?
12
Is it common for an author to get an executive producer credit when they are deceased?
8
Do actors get paid if their digital image is used in a movie?
2
Do crew members require a special contract to appear on screen? (are they actors?)