When was the Star Wars Chasm Fail edited out?

I saw Star Wars the weekend it was released in L.A. I distinctly remember Luke trying to rope the scaffolding and missing when crossing the chasm with Leia. Leia gives him a kiss and says, "For Luck" while he reels in the rope and then he makes the second attempt and succeeds.

My confusion on this topic concerns the "Original Theatrical Release" DVDs which do not show this scene. Was this scene then edited out before the widescreen release or was it edited out later and then omitted from the "theatrical release" DVD set?

I just re-watched the scene on the "Widescreen Limited Edition" version of A New Hope. This is the one that contained not only the re-mastered and Lucas-ized update done in 2006, but also a copy of the earlier print that was not restored. (And you can see a lot of clarity and picture stability issues in it.)

However, this is the version that had the echo added to the dialogue between Luke and Leia, so it had already been altered from the original 1977 version of Star Wars. I know this echo was added for an early re-release that was before 1981. (I won't go into the landmarks of my life, but let's just say I know it was out before 1981, and likely before 1980, when The Empire Strikes Back came out.) That means, with this print, which is the earliest available (remastering was done later, after the echo was added), we can only go back to around 1980 at the earliest.

For what it's worth, I have always been puzzled by that, as well. I thought I remembered Luke throwing the line once, it not catching, and having to throw it again, but it's not in this print. (I am positive, though, that the kiss was always just before they swung across the line -- trust me, you see a movie like this as a teen on a date with a girl you've been drooling over for a few months, you remember every kissing scene in the movie!)

So if it did exist, it was cut before 1980 or 1981 and it's going to be almost impossible to find any version of the film to back up that it was once there.

The missed grappling hook throw (in the film version) seems to be a myth. Google "Luke misses grappling hook" and peruse the results.

It seems that people remember this sequence from non-movie materials - novelizations, radio plays, story books, etc., but attribute it to the movie itself. Despite the "memories" of many people like yourself, there is no evidence whatsoever that the missed throw was ever filmed. The best answer is that your mind is playing tricks on you. This kind of thing happens - it is why eyewitness testimony is unreliable. 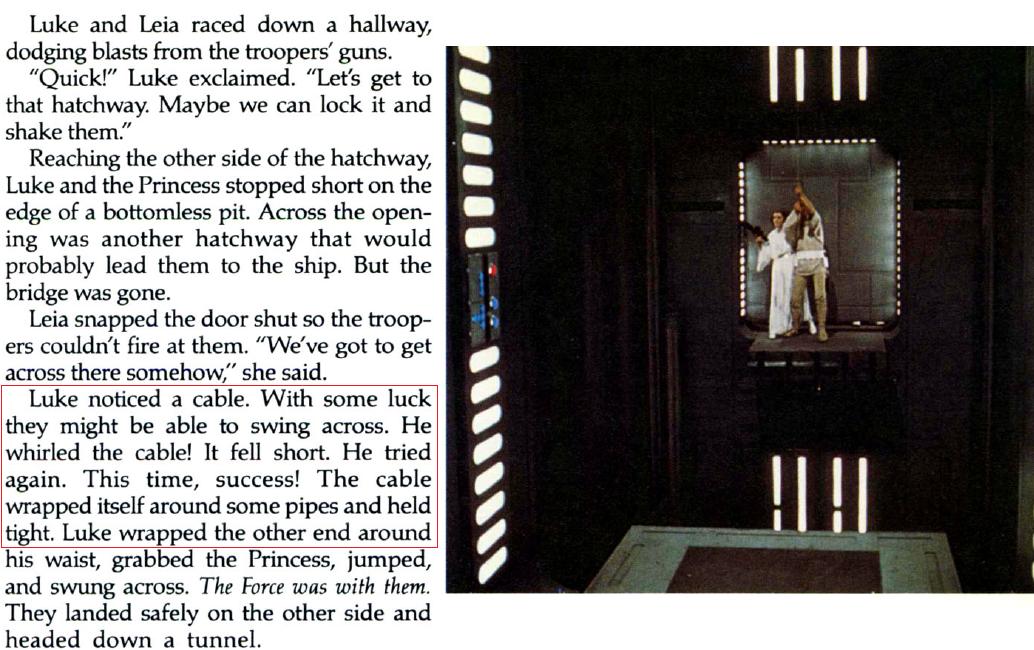 or the film's official novelisation

Luke didn’t reply. Instead, he removed a small but heavy power unit from the utility belt of his armor and tied one end of the cable around it. Making sure the wrapping was secure, he stepped as close to the edge of their uncertain perch as he dared.

Whirling the weighted end of the cord in increasing circles, he let it arc across the gorge. It struck an outcropping of cylindrical conduits on the other side and fell downward. With forced patience he pulled the loose line back in, then recoiled it for another try.

Once again the weighted end orbited in ever greater circles, and again he flung it across the gap. He could feel the rising heat behind him as he let it go, heat from the melting metal doorway.

This time the heavy end looped around an outcropping of pipes above, wrapped itself several times around, and slipped, battery end down, into a crack between them.

This is funny. I saw Star wars the first day first show. Luke missed and tried a second time in the theatrical release exactly as in the books. Lucas took it out either during the run or it was dumped because the film had to sped up to fit on CED and Laserdisc and VHS and Beta to fit so anything extraneous was likely to be jettisoned to get the whole film to fit. So, I imagine Luke missing never saw a video realease except for perhaps the Ken Films Super 8 exceprts that came out in 1977. Can anyone see if Luke's miss showed up on Super 8 from 1977? But, yes I was there at the first day and Luke missed. And Luke missing was much better storytelling because it proved he was new at all this adventuring and it created tension. It was a better shot for sure. She kissed him after he missed.

All, I am nearly certain that this thread has been resolved but for arguments sake, I offer this. I was in the theatre for the initial release and....without any doubt...Luke's first throw missed. Of this, I am certain and there is no doubt. With that said, only two choices remain....the first is that I lie. The second is that I don't....

All I ask is this...first, keep your minds open. Second, if you did not personally view episode IV in the theatre then hold judgement....it is hard to be a witness to a scene but nearly impossible if you were never there....My theory is that there were changes made to the original film after the theatrical release that have forever altered public perception of the film....This is not the only scene that was altered but, to me, the most obvious....just my 2 cents, and I welcome any feedback..David

Not the answer you're looking for? Browse other questions tagged star-wars alternate-version a-new-hope .

6
Rebel in opening scenes of Star Wars Episode 4
9
Modifications to the Star Wars original trilogy
19
Was Star Wars (intended to be) a children's movie franchise?
6
Why was the cocoon scene edited out of Alien?
5
What previous works was Star Wars influenced by?
8
Star Wars the original edition
55
Which worse thing was Luke expecting in Star Wars: A New Hope?
8
At which point in its production was Star Wars' visual identity fleshed out?
1
Star Wars IV, V, VI "Disney Updates"