What would an observer see when someone goes through the Turnstile in Tenet?

The scene makes more sense when the actual Sator is revealed entering the room the Protagonist is in. The actual Sator then walks towards the Turnstile and emerges from the other side of the Turnstile, where he is inverted and experiences the flow of time in reverse. He then once again has the bizarre conversation with the Protagonist, this time in reverse. So, from Sator's path can be traced using the following diagram. 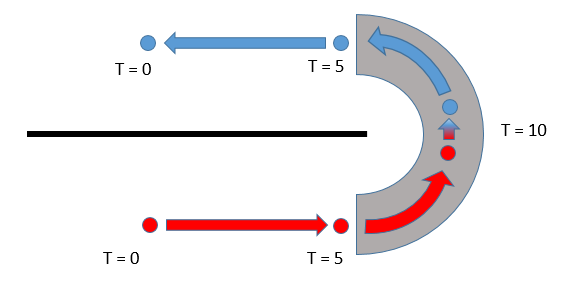 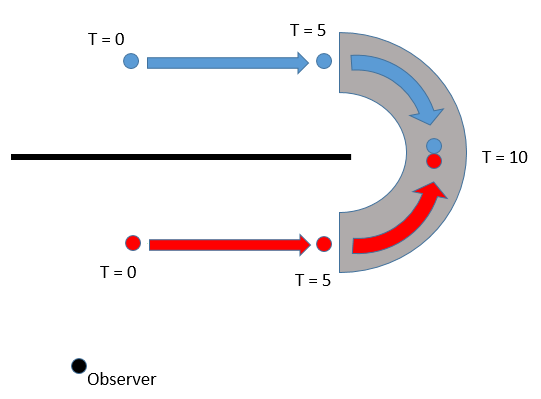 If an observer was looking into the Turnstile at the exact moment the forward and inverse Sator met (at T = 10), what would he see? Would he just see Sator disappear in thin air?

I personally think that he would see Sator vanish, but I can't come up with a good explanation for this. If Sator does indeed vanish, where does he go?

Yes, from the observer's point of view, Sator would disappear. The observer 'continues' into the future, but inside the turnstile, Sator starts moving into the past. So he is no longer present in the observer's future. However from Sator's POV, the transition is smooth, as we have seen in the movie with Neil and the rest.

We do actually see this in the movie at least once, but in reverse: the first time we see a turnstile in operation, two black-clad figures suddenly walk out of it, even though it was empty before. These later turn out to be two copies of the protagonist, one travelling backwards in time and the other forward. I'm not sure but I think later we also see it happen in forward time, when Neil inverts during the final battle.

As for what it would look like if you could actually see into the turnstile, we don't know, because it doesn't have a window and it's not shown in the film. I'm not sure there's anything it could look like while remaining consistent with what's shown from Sator's point of view, so I guess we have to assume the inside of the turnstile fundamentally can't be observed from outside.

Not the answer you're looking for? Browse other questions tagged analysis tenet .

5
How is the bad guy's car moving backwards while its occupants are not?
4
How did the car end up at the port after explosion in Tenet?
4
Clarification about annihilation in Tenet
14
How does Sator get the algorithm after the car chase?
1
Who threw the suitcase to the other?
10
Why didn't the algorithm detonate when Kat killed Sator?
11
How did the cars get inverted in Tenet?
7
When was the gold un-inverted?