Was Amy Sedaris' role on Mandalorian counter to the entire Star Wars aesthetic?

It's been noted that her wardrobe and hair were from Ripley in Alien. However, my question relates to two things I also observed:

But Sedaris seemed to drag the pace to a screeching halt every time she was on-screen with her slow, almost bovine delivery. (I personally found it hilarious in that Sedaris is something of a comedic terrorist in the tradition of Andy Kaufman, and I felt like they were letting her do her thing.)

It struck me as completely visually incongruous every time she was on screen (which I also found hilarious because it was Sedaris.) Not that it wasn't "well coiffed" like in every other hair style in Star Wars, but raggedy and unappealing.

Mandalorian is John Favreau's show (creator, executive producer, head writer, showrunner, etc.) and he is known partly for comedy, from Swingers to the highly successful Marvel "Iron Man template", so I'm wondering if he's managed to bring something new. It's not that Star Wars hasn't always had great humor, from that first chess game with Chewy, but this seemed like a whole other dimension.

A little bit, but not really.

TL;DR, while perhaps in some ways the character's aesthetics or Amy Sedaris' more candid comedy may seem a bit over the top and out of place, I would argue you can see where the choices are coming from.

The whole episode is paying homage to Tatooine and it is trying to mix tones between the prequels' and the original trilogy's Tatooine scenes.

When we look at The Phantom Menace in particular, we have a film that is one of the lighter Star Wars films in the Skywalker Saga, panning to a younger audience, especially when you consider it's slap-stick comic relief character of Jar Jar Binks along with the fact that audience is being introduced to a child-aged Anakin Skywalker long before he turned to dark side and became Darth Vader.

In addition this film introduced Watto, Anakin's a Shmi's slave owner and Tatooine parts dealer. There's a little bit of a juxtaposition to the idea that "a child" works in Wattos shop shop and you would think he would have look over Anakin, but ultimately it is Jar Jar (whose very childish) whose problematic contrasted to the idea that Peli Motto looks after "The Child". (Not to mention the Chosen One prophecy includes another prophecy about a child helping the next chosen one! Both The Child and Anakin are also "strong with the Force!").

Motto rhymes with Watto (and "M" looks like an upside down "W" and visa verse). Watto also had pitt droids, -and just like the plot in The Phantom Menace where Qui-gon, Obi-wan, and Queen Amadala have to stop and get parts to fix their Naboo Starcruiser, does Din Djarn also need to stop on Tatooine to fix the Razorcrest.

Her "rusty-colored" mechanic-wear feels pretty Star Wars too, although it's something that has been highlighted more in background characters on parts of Star Wars, like Clone Wars, Rebels, and the sequel trilogy. 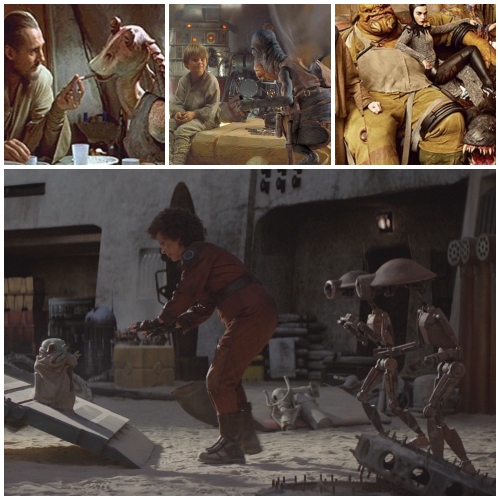 The Phantom Menace is where one can really see a lot the elements that make up Peli Motto!

However, when one looks at the original trilogy, especially the first introduction to Mos Eisley's Cantina in A New Hope, the atmosphere is comically seedy. There is a bit of a clash between monstrous-looking aliens, while a rather joyous/upbeat tune plays until shockingly violent mini-skirmishes brake out. Han Solo is also introduced in this sordid under world and he is one of the most comedic characters featured in the original trilogy. You could describe her character as a collective of the Cantina experience.

Not exactly. While I would say that most women featured in Star Wars so far have a much cleaner aesthetic (and aren't usually quirky), the men have not.

The original trilogy was made between 1977-1983. If you look closely at Luke's and Han's hair, one might argumentively notice how "outdated" and "bad" their hair may look. The Mandalorian is trying to stay closer to the original trilogy's aesthetics, which are characteristically full of bad and/or "big hair" of the late 70's and 80s.

"Star Wars is very different to Marvel style," explained Waititi at the press event. "They know that the tone of the first films really should be kind of adhered to. That’s what the fans like and you can’t really disrespect it, I guess, is a nicer way of saying [you] can’t put too many jokes in." 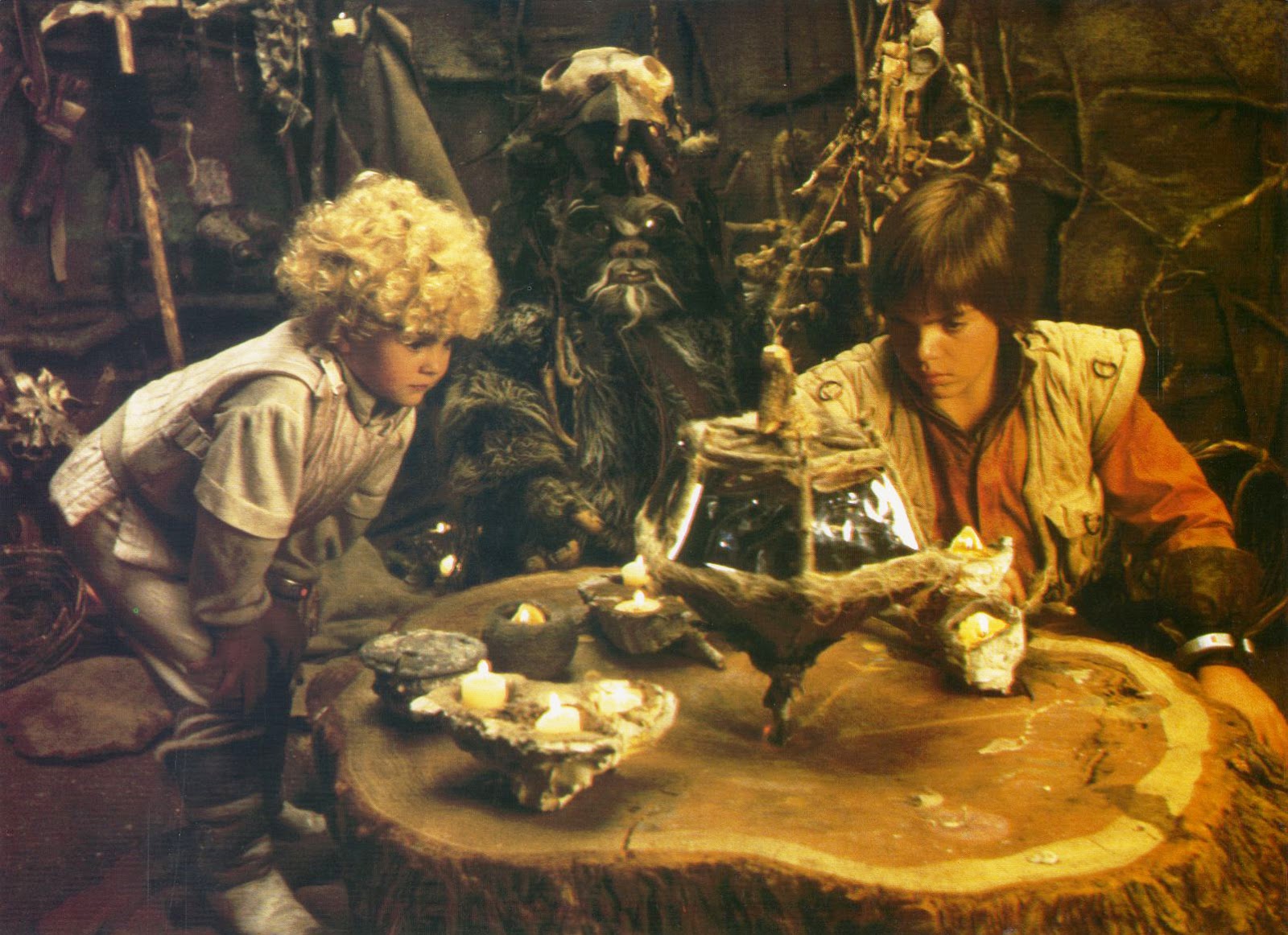 With that said, there is also the two made-for-tv films Ewok Adventure films. These films continued with a low-budget 80's look with two of it's human characters Cindel and her brother Mace, definitely sporting that era's questionable hairstyles. So IMO Peli Motto has a look that one might see in 70's/80's films (A parody of Alien, anyone?! Or you could even mash-up Mace & Cindel to visually get Peli Motto!), despite that maybe it's unusual for Star Wars female characters thus far.

Plus, even when you look at the remainder of the episode with Toro Calican juxtaposing a teenage/young adult Attack of the Clones Anakin Skywalker, where Toro sets out to be a great bounty hunter, only to die before the episode ends while confronting Motto, also pans to some darkly comedic aspects that kind of helps land Motto's performance.

There are other episodes too, like episode 1.06 that comes off kind of cartoony similar to certain episodes of The Clone Wars with rather seedy characters. That might seem completely out of place when you compare it to some of the other episodes like 1,3, or 7, which are a bit more dramatically serious, but episode 1.05 (this episode) helps bridge that divide with Peli Motto.

As for the pacing, while yes, I might agree it's a bit wonky, I would argue that it isn't very jarring and kind of plays into the comedic aspects of the episode.

Just wanted to add one additional possible reference or influence. 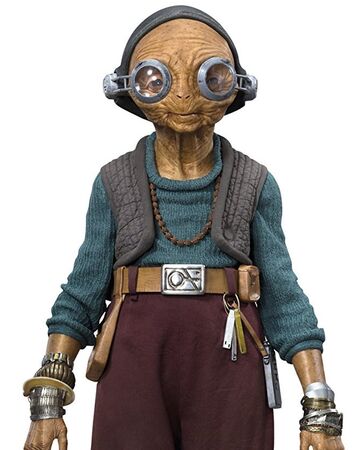 Maz is also a bit of quirky female character (albeit in a different way). Granted she's not human, has no hair, and is a wise force user.

Although unconfirmed, there is also a statue in Anakin's room that looks a lot like Maz Kanata and would then also create another tie-back to The Phantom Menace.

Not the answer you're looking for? Browse other questions tagged character analysis star-wars acting the-mandalorian .

20
When was the Star Wars Chasm Fail edited out?
8
Modifications to the Star Wars original trilogy
19
Was Star Wars (intended to be) a children's movie franchise?
13
Did Yoda appear in Star Wars The Force awakens?
10
Which is the correct pronunciation of Han in Star Wars?
5
What previous works was Star Wars influenced by?
3
“The Mission” and “The Nightmares” in Star Wars: The Clone Wars
8
Star Wars the original edition
4
What was given to Cara Dune at the end of The Mandalorian S2E4?