In Swordfish the DEA is investigating a terrorist (Travolta) who's known to be a big deal. Here they're looking into a house that was recently leased to a blind corporation, as this guy on the left says to the guy with the binoculars (Don Cheadle). What's a blind corporation supposed to be? Doesn't it have a name? I mean they're DEA, how can they not know? 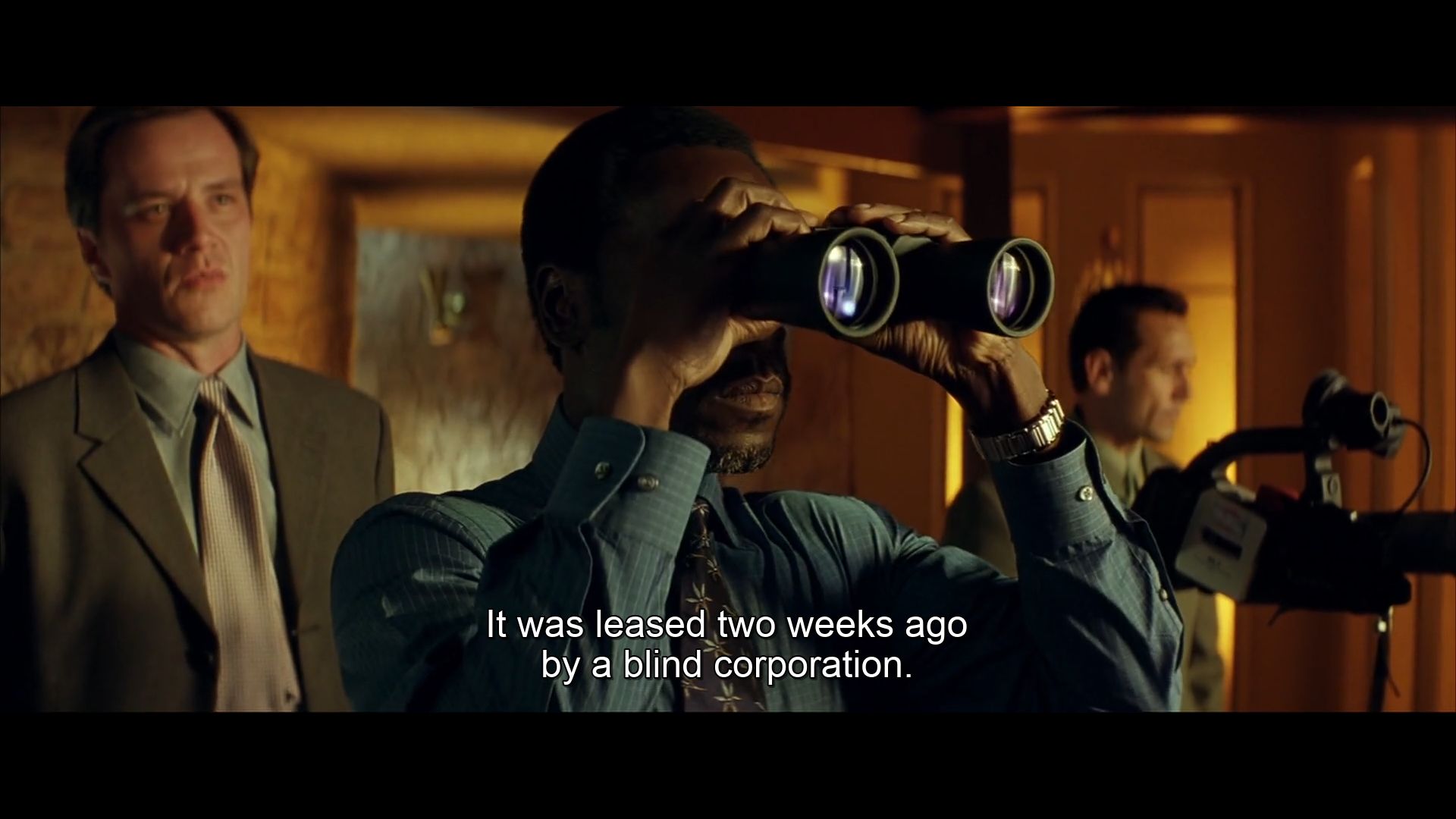 I know that this movie is style over substance mostly, but still interested.

Iandotkelly correctly explained the "blind" of a "blind trust", but the context of this scene in question suggests more that they are talking about a shell corporation.

A shell corporation is a company or corporation that exists only on paper and has no office and no employees, but may have a bank account or may hold passive investments or be the registered owner of assets, such as intellectual property, or ships.

Shell companies have been used to commit fraud, by creating an empty shell company with a name similar to existing real companies, then running up the price of the empty shell and suddenly selling it (pump and dump).

While not always the case in real life, in movies shell corporations generally imply a shady business which is used specifically so that the real person can remain anonymous.

In case of terrorism, shell corporations provide a "legal" way for the terrorist to operate publically using the shell corporation as an alter ego. If John Travolta's character had leased the house to his name, that would've sent red flags up everywhere (I am assuming he is a known or suspected terrorist, given that they're observing him in the screenshot you posted). But "Globodex Incorporated" leasing a house doesn't raise red flags.

However, it is unclear why they are calling it "blind" corporation. I have never heard of this being a synonym, nor can I find any mention of a "blind corporation" online.

To a layman, there is some overlap between a blind trust and a shell corporation: you don't know who runs it.

But from an administrative perspective, these are two very different things that have nothing to do with each other. A blind trust is a pre-existing company which is temporarily being run by a person (not the founder or permanent owner) whose identity is not known by the real owner of the corporation, a shell corporation is a company created for the unknown founder for the specific purpose of being a shell company.

Since a blind trust makes no sense in this context; I suspect this is either bad script writing or a portmanteau which isn't very well known (since there's no Google result as far as I can see).

Is the name of the company unknown?

Doesn't it have a name? I mean they're DEA, how can they not know?

The point isn't to imply that the DEA doesn't know the name, it's that they didn't particularly point out the name and instead described it in a way that is relevant. If they had said "Globodex Incorporated", the viewer wouldn't have known if that is a legit in-universe company or not.

This is a matter of out-of-universe exposition to the viewer, but you can reasonably argue that the name might not be mentioned in-universe either, if the listener wouldn't be interested in the particular name. Especially if it's a shell corporation, the name holds little value anyway as it's just an alias.

Not the answer you're looking for? Browse other questions tagged swordfish .