What's happening exactly as before?

At the beginning of The Matrix Reloaded, after Neo fights the upgrades and flies away, Smith says to another Smith:

Smith 1: That went as expected.

Smith 1: It’s happening exactly as before.

What are they talking about?

I'm shooting from the hip a bit (I didn't go re-watch the scene), but I think they are referring to what we'll be confronted with explicitly later in the film when The Architect reveals that (if we're counting from the emergence of one integral anomaly to the next), this is the 6th iteration.

When Smith 1 says it is "happening exactly as before", I think he's referring to the procession of events surrounding Neo's development into his role as the integral anomaly.

When Smith 2 says "not exactly", if I recall he exchanges a knowing look with Smith 1 to indicate that Smith's ability to duplicate is what he means. (I'm not sure whether the fact that Smith himself is "unplugged" from his role as an agent of the system is also different this time around or not.)

I don't have time to type it up atm (and I'm not sure how closely it matches what was shot), but here's a screenshot of that section (Scene 19, marked as page 14, from The Matrix Reloaded script dated Oct 27, 2001) 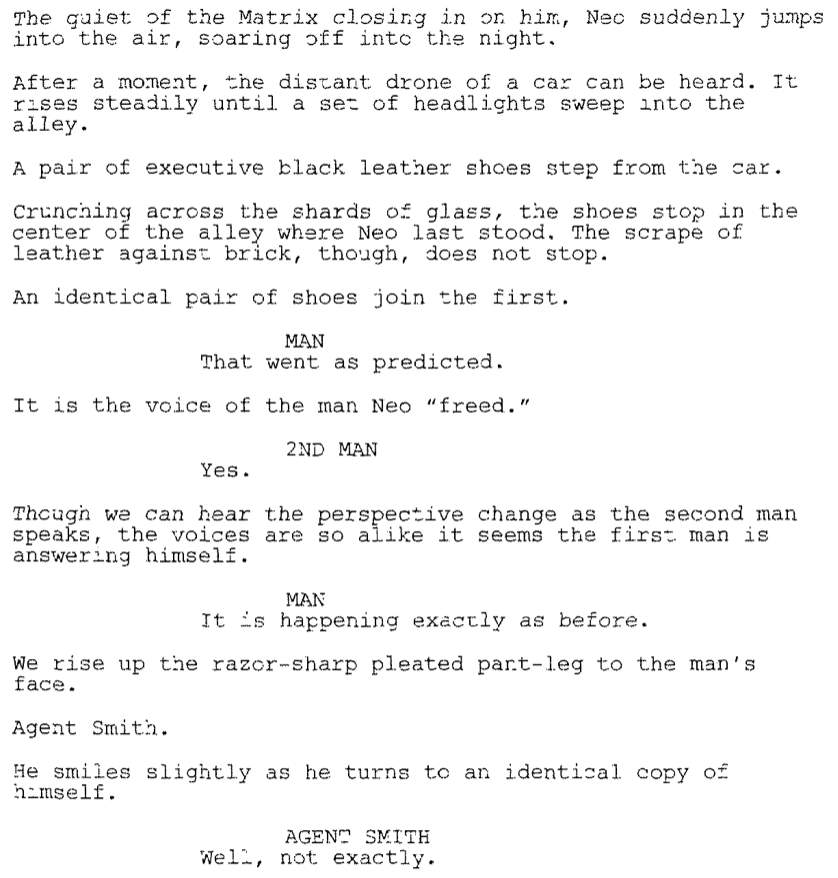 Transcript of the screenshot:

The quiet of the Matrix closing in on him, Neo suddenly jumps into the air, soaring off into the night.

After a moment, the distant drone of a car can be heard. It rises steadily until a set of headlights sweep into the alley.

A pair of executive black leather shoes step from the car.

Crunching across the shards of glass, the shoes stop in the center of the alley where Neo last stood. The scrape of leather against brick, though, does not stop.

An identical pair of shoes join the first.

MAN: That went as predicted.

It is the voice of the man Neo "freed."

Though we can hear the perspective change as the second man speaks, the voices are so alike it seems the first man is answering himself.

MAN: It is happening exactly as before.

We rise up the razor-sharp pleated pant-leg to the man's face.

He smiles slightly as he turns to an identical copy of himself.

I, too, think that they're refering to what they've experience 5 times before (The Architect reveals that the current Matrix is the 6th run) - those fights have happened before, hence the outcome was known to Smith. In "Revolution" with the final fight between Smith (in a Matrix full of Smiths) against Neo this is repeated when Neo is lying on the ground and Smith halts with the words "Wait, I've seen this before, I know how it ends..."

Not the answer you're looking for? Browse other questions tagged dialogue the-matrix-reloaded .

14
Could Neo's supernatural powers in the real world suggest that there were a super-matrix?
3
How do they locate the physical body in Animatrix: Kid's story?
12
Could the oracle really see the future or just predict choice based on human emotion?
23
Ash in Alien cannot lie to humans, Yes?
4
When the Architect says Zion is dead, how is that true?
35
What did Cartman mean here by Rainbows?
1
What does Cecil mean when he says “Oh yes, he's the one.”?
1
Does Adaline say why she has to leave the city at the beginning?
6
Why was the freeway set destroyed?