What was the "Dinosaur Supervisor" actually supposed to do in Jurassic Park?

I was wondering around the internet and I came across a wonderful image that made me laugh for half an hour. 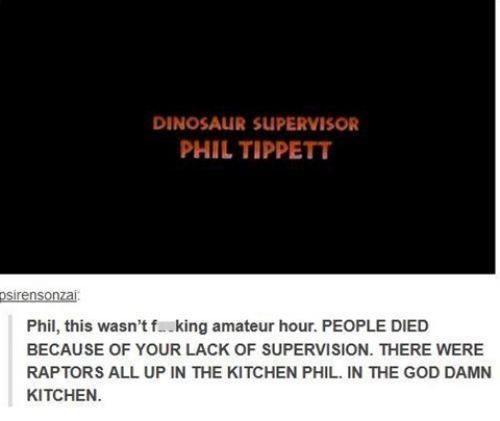 The joke was funny, but it rose a doubt in my head. What is the real job of a dinosaur supervisor in a movie like Jurassic Park?

Given Phil Tippett's background in animation, he appears to have been given a lead technical/animator role, supervising how the CGI dinosaurs looked/moved.

Interestingly, the wikipedia makes mention of this very meme...

This was discussed at some length in an article about Tippett for Wired Magazine:

Originally, Steven Spielberg’s life finds a way dinosaur amusement park movie was going to be done with stop-motion miniatures from Tippett combined in post-production with larger robotic dinosaurs created by special effects master Stan Winston. But then Muren told Spielberg about the new CGI technologies that were being used by ILM for Terminator and said he might be able to make dinosaurs. Spielberg and Tippett watched a mock-up of CGI dinos and were blown away. In that moment Tippett told Spielberg, “I think I’m extinct.” (Spielberg later worked the line into the Jurassic Park script.)

“It was like this big emotional thing for me because I was like, ‘Oh god, that’s it. What I do is not relevant anymore,'” Tippett said, recalling the film’s production.

Spielberg decided to use CGI for the film (along with Winston’s larger animatronic dinos). But Tippett wasn’t out. After cutting their teeth on stop-motion work, Tippett’s animators were better equipped than computer nerds at making dino-motion look real. So they came up with a solution to combine the efforts — the Dinosaur Input Device, an animator’s puppet covered in sensors that translated movements into computer code (one of the devices sits in Tippett’s Berkeley office, not far from the visual effects Academy Award that Tippett subsequently won for Jurassic Park).

Notably, you can see Phil Tippett in the 1994 Oscar Award trailer for the "Visual Effects" category. Tippett is the one playing with the scale-model dinosaur skeleton: