Is Peter related to Regina in the origin world?

Now, Helge Doppler used to be the father of Peter Doppler who is turn the son of Bernt Doppler and Greta Doppler. So, that makes:

Regina to be Peter's aunt.

Am I right? Is Peter related to Regina?

Now, there can be a slight discrepancy:

Helge Doppler was the son of Bernd and Greta Doppler according to fandom. But in the official Dark website, there is a mention of a third person (Anatol Veilev) with whom Greta bore a child which turns out to be Helge. If Anatol exists in the origin world and the same situation happens there, Regina would become a half-aunt of Peter (not sharing blood).

Am I right? Is Peter related to Regina in the origin world, too?

I think the discrepancy you pointed out shows why they are not related.

I cannot think of a single instance in the show where the same child was born with different parents in another one of the worlds. Everyone who has a child together seems to have the same child, whether in Martha/Eve's or Jonas/Adam's world. This makes some sense, since a child is a combination of both parents (ignoring the extremely unlikely biology of having identical children in loops).

By this standard, I think we have to accept the Dark website when it suggests that Helge is not actually Bernd's son, and that this should also apply in the origin world. This would mean that although Peter is Helge's son, Helge isn't actually Bernd's son, so there is no blood relationship between Peter and Regina.

I think the accepted answer misses the mark by suggesting that Bernd Doppler is not Regina's father, especially in the Origin world. In fact, the last scene strongly implies the opposite. At around 1:04:00 in the episode, we go to a scene in what appears to be Regina's house (Jonas/Martha's houses in their respective worlds). It zooms in on this picture: 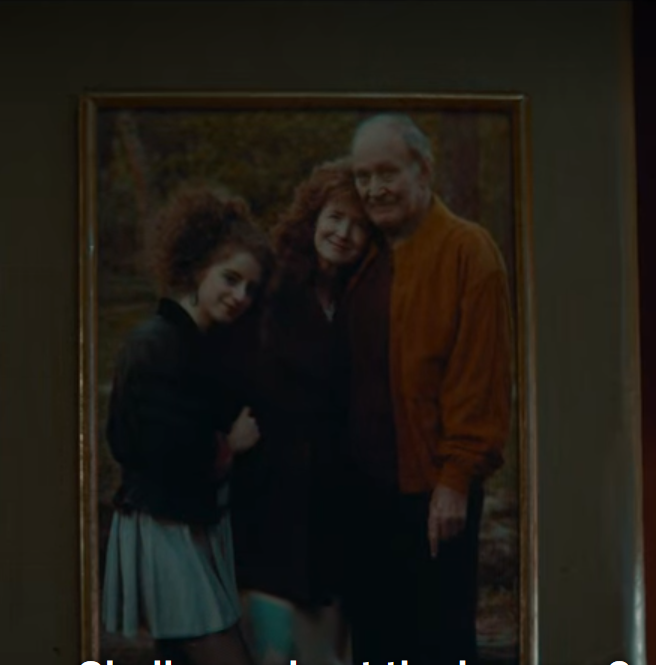 Which appears to be a family photo with Regina, Claudia and Bernd. To me, especially based on the posture in the picture, suggests that they are a family, and Regina is Bernd's daughter. It definitely seems to imply some relationship between Claudia and Bernd.

There are then 4 theoretical possiblities.

Option 2)
Regina is not Bernt's daughter.
Helge is Bernt's son.
This makes Regina and Peter not related.

Option 3)
Regina is Bernt's daughter.
Helge is not Bernt's son.
This makes Regina and Peter not related.

The series provides no solid evidence to say if Bernt is the father of either Helge or Regina.

Assuming that each of the Options are equally possible, the highest changes that Peter and Regina are related is 1 in 4.

In short, there is a small possibility that the two are related, but it appears that the changes are really low.

That doesn't exclude that they knew each other via another way, but it's quite unlikely, or at the very least completely unexplored.

7
How could Claudia know of this?

4
Why didn't Regina leave Snow White behind?
4
Why painting on the face?
2
Why wasn't Peter grandma's favourite?
5
What causes the origin of Batman?
7
Who invented the time machine in Eve's world?
4
Why is there is no Jonas in Martha's world?
0
Origin of 2 Marthas from Earth2
5
How do they record the voice track in heavy rain scenes?