Is Clue the only film that aired true, multiple endings in theaters?

Clue (1985) famously had three, true (intentional) alternate endings that were included on the VHS and aired in theaters. It’s not uncommon for alternate endings to appear online after a film is out of theaters (Fatal Attraction, Terminator 2, and others), especially as they're often deleted scenes or scrapped concepts. But Clue used their alternate endings as a marketing tactic while in theaters - you didn’t know which one you’d get when buying a ticket (until they eventually showed them all).

While "director's cuts" occasionally make it to theaters, the recent, on-demand launch of Netflix's Black Mirror: Bandersnatch and Unbreakable Kimmy Schmidt: Kimmy vs. the Reverend has me wondering: did any other films air multiple, true alternate endings in theaters upon release?

There is an Indian movie in Malayalam called Harikrishnans with

a love triangle, which ends with the lead female actor ending up with one of the two lead male actors.

There were two endings released in theaters, with the endings supposedly chosen based on the "popularity" of the actor in that region.

Run Lola Run (1998) had three endings, but they were released as part of one movie (unlike Clue which sounds like they released multiple versions of the movie at the same time).

In it, Lola must collect a large sum of money in twenty minutes to protect her boyfriend from a gang he owes money to. The story plays out once. When it ends, it restarts but something slightly different happens that completely changes the outcome of the story.

Wayne's World (1992) also had multiple endings which where the "mega-sad ending", the "Scooby Doo ending", and the "mega-happy ending".

Wayne's World 2 (1993) sort of this this as well. It has a mega-sad ending which Wayne and Garth disapprove of and decide to re-do it.

Unfriended: The Dark Web (2018) reportedly did have two alternate endings that were played randomly in theaters. It's release was widely compared to Clue because of this. 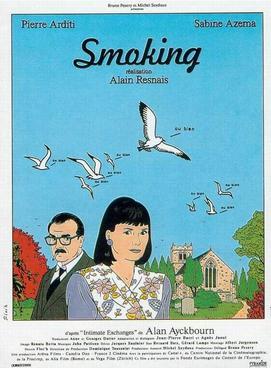 Smoking/No smoking by Alain Resnais (1993) has two versions projected as different movies. (I do remember seeing both the same week.) With different posters. Within each movie (Smoking and no smoking), there are six different endings. All roles are played by the same two actors.

(Little Spoilers) We see two paths that the character takes depending on whether she caught the train at the start of the film or she didn't. I haven't seen the film for a long time but in one path at the end, I think she either dies or is seriously injured and in the other, she's fallen in love.

Its a kind of Butterfly Effect movie, how something so innocuous and tiny can have such a massive effect on someone. Maybe "Run Lola Run" is also similar film I've heard.

The Butterfly Effect film starring Ashton Kutcher doesn't qualify for the answer as has one ending.

16
Which was the first movie with alternate ending?

5
Were there different endings to the movie "Clue", based on the odd clips in the old preview?
8
Is there an indication that the multiple "Clue" endings influenced it's box office reception?