Did the Italians plan to strangle Frank Sheeran before assassinating Jimmy Hoffa? Why?

I don't understand the episode with the fish on the back seat of Chuckie's car in The Irishman.

It looks like Sally Bugs were to strangle Frank Sheeran but something went wrong. The back seat of Chuckie's car appeared to be wet from a fish. This is unexpected for Sally who were to take the back seat. Sally starts arguing with Chuckie about it. Frank notices this misunderstanding, apparently understands Sally may kill him and insists he takes the back seat instead of Sally.

Sally tells Frank to take the front seat before he notices the back seat is wet. 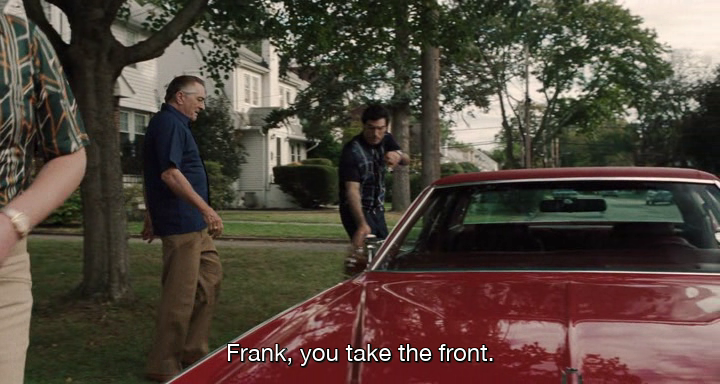 Russ rather aggressively is sending Frank to Detroit. 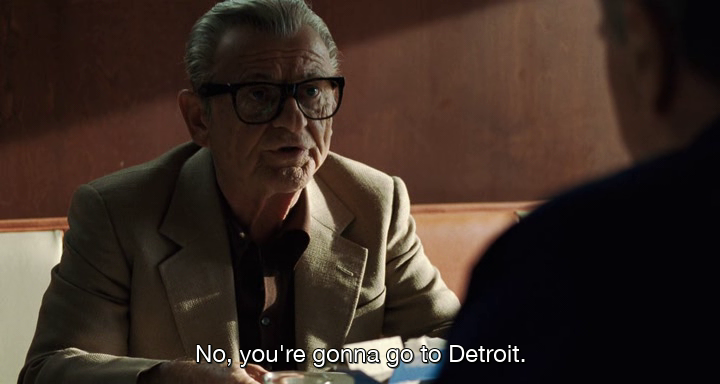 Throughout the movie Frank was depicted as being the sole reason of keeping Hoffa alive using his connections and diplomacy to prevent any damage Hoffas demeanor had attracted to him. He was his bodyguard, advisor and his (last) friend. So it was to be expected that he would hold a grudge if someone were to harm Hoffa, as inevitable as it might seem. He would also be able to greatly complicate a situation if he were with Hoffa at the time of a hit performed by somebody else.

So to get to Hoffa, he - his last ally - needed to be out of the picture. He was not important enough to save him from a hit and his only friend was Russel, who was also not in his prime anymore. It is likely that the other family demanded a sacrifice from Russel and that that sacrifice was Frank.

Chucky knows about all this and he knows that Frank is the only person standing between Sally and his Father. He tried his best to reveal the signature hit from Sally to Frank so that he could take according measures. You can clearly see that he is avoiding eye-contact in almost all scenes and tries hard to come up with a believable excuse.

Frank is also very suspicious of Sally as can be seen when they walk to the car. He definitely knows what is up when he is asked to take the passenger seat. He looks at Sally, the seat and for any other cars on the road, thinking of the smartest way out. Once the fish topic comes up, he is able to confront Sally (~0:28) and when they are staring at each other for the brief moment, Frank reveals that he knows what Sally is up to and Sally is cornered into a situation where he can either abort or escalate. He chooses to abort.

Chuckie offering a Newspaper as seat-cover for Frank (~0:39) acknowledges Franks action, but is relieved (for Frank and his Father) but also greatly unsecure (Frank is now in the backseat, Sally might be on to Chuckie now) at the same time.

Sallies flinch (~0:53) shows how annoyed he is by the failed hit. Chucky tries not to meat his eyes for the rest of the scene.

While Sally tries to confront Chucky to no avail, Frank sits in the backseat - ready to react.

After a while (~2:12) Sally finally aborts the confrontation and hints that there are some higher-ups ("cause i wanna be able to explain this if somebody asks me") that will not be content about the outcome of the hit.

The result of it can be seen later, Frank will not let himself get into a situation like that anymore, so a "clean" hit is out of the question. Also Russel would need to be able to talk to Frank after this. So the only way to achieve all of the original goals (kill Hoffa, Frank gives up protection on Hoffa, Russel makes sacrifice) is to task Frank with killing his friend Hoffa.

Not the answer you're looking for? Browse other questions tagged plot-explanation the-irishman .

9
Why no repercussions of assassinating the Secretary?
3
Why did the Italians want Rocco killed by the Russians?
4
Why did Michael kill Frank Pentangeli?
1
How was Chuckie involved in the assasination of Hoffa?
1
For whom did Sally Bugs work?
6
Why did Jimmy leave the Frank's room door slightly open?
3
Why is Jimmy angry at the flag flying at half mast?