According to this Usenet post from 18 January 2000, the tenth such episode was titled "Treehouse of Horror X".

The capsule for "Treehouse of Horror X (BABF01)" is now available -- just in time for tonight's repeat airing! How's that for timing? It's at "http://www.snpp.com/episodes.html"; follow the BABF01 link.

Note that while the URL mentioned in the post doesn't work anymore, that site's contents can be accessed via simpsonsarchive.com; the capsule referred to above is also available there.

I also see similar posts for earlier episodes, so it looks like that title was used at the time: 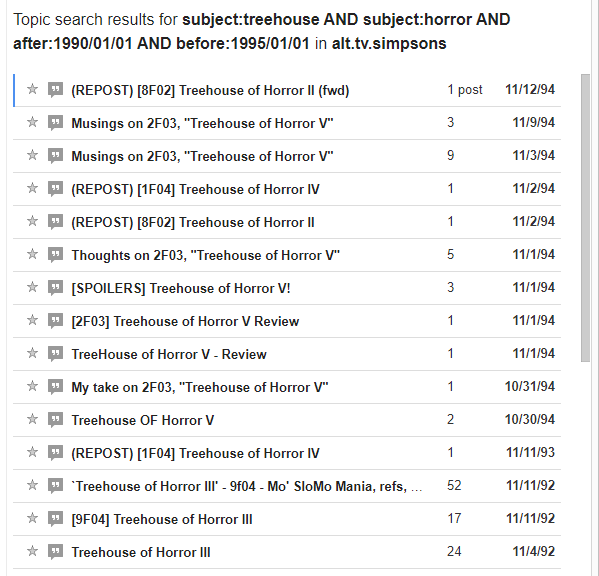 I assume that the "The Simpsons Halloween Special" mention at the start of the earliest episodes is for the average viewer, perhaps as a warning that the content of that episode is different (often more violent) than the usual Simpsons episode. That they stopped doing this after a decade or so is likely because by then "Treehouse Of Horror" was an established "brand" of its own and even an event of sorts.

Actual episode titles are often not shown onscreen in shows.

It seems likely, as according to the Simpsons wiki:

The yearly Halloween special was named "Treehouse of Horror" because the original special depicted the Simpson children in their treehouse telling scary stories to one another. In later years, the series dropped the framing device of characters telling stories but kept the Treehouse title. It also takes reference from a classic horror movie Dr. Terror House of Horrors which was an anthology of six different horror stories.

3
How did US viewers learn The Simpsons episodes' names?

25
Have the Tracey Ullman episodes of The Simpsons been officially released since their original air date?
2
Is Comic Book Guy's Treehouse of Horror alter ego based off the Marvel franchise?
9
Why does Bart Simpson frequently speak British sentences in the classic The Simpsons episodes?
3
How did US viewers learn The Simpsons episodes' names?