Why would they use a backdrop in this outdoor scene?

I was watching the movie Double Jeopardy (1999) and the opening scene features a party that takes place at a large lodge type house on the water in Vancouver. In some of the scenes the bay can be seen in the background, but it appears as though the shots of the bay are not shot in situ, but are shot using a backdrop. Here is a clip: 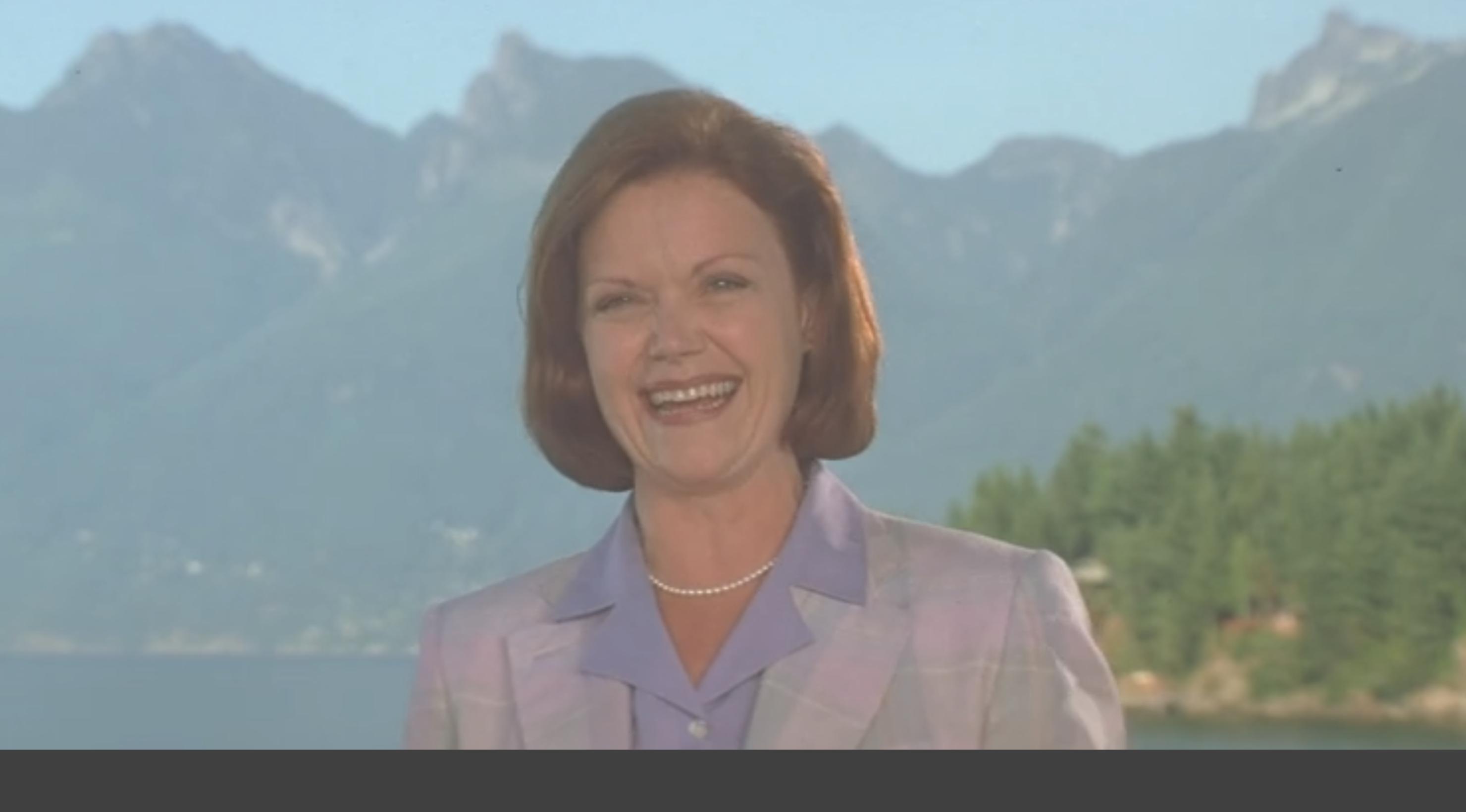 The faded background and unnatural transition between the figure in the shot and the background tell me that the backdrop is fake and the scene shot in a studio. However, clearly the rest of the party shots were shot at an actual house.

So, my question is, why would they use a studio shot for this, rather than just use the natural scene? I understand that it is easier to get the lighting right in a studio, but come on, how hard could it be to do this on location? I am not a cinematographer, so I don't know the difficulties, but it seems to me that it is just cheesy for them to be doing this shot in a studio. Are they just being lazy?

There's a lighting mis-match, but I think it's 'expected' for the shot. I don't think it's rear projection.
It's certainly not a 'backdrop' as a boat sails across it at one point.

In this wide you can see the sun is high & behind the house - look at the tree. Most of the garden is shaded by the house, and probably a couple of big flags so we don't see hot spots on the principals. You can see a few of the crowd are quite brightly lit over by the tree. Whether this is the natural shade provided by the house we'll probably never know, but my guess is it's done with diffuser. That guess is hedged by the guy in the pink shirt, who still comes out a bit hot. Full shade would have killed the shadows on the shirt too, a diffuser would just soften them.

When we turn around to see the principals speaking from the low wall, we can see the lighting change. The colours, however, are very close. Rear screen projection tends to be quite washed-out compared to reality. [Other shots, not captured here, give a good overview of the colouration from several viewpoints.]

Because this position would be in bright sun - spot the trees in the background, their lighting still matches the brightness and angle of the previous shot - then the principal is flagged. A 'flag' can be black or white, any size from a couple of feet to 15ft square, mounted to a large frame which can be moved to any position, as required.
Let's assume this is a white flag, being used as partial shade but also as a diffuser, making the light very broad. Like a cloudy day, a large diffuse flag will soften shadows without killing them entirely or blocking all the available light.
Add to this a strong rear light [probably with a warm gel to make it 'sunnier'], high up, to give us an impression of hard sunlight without bleaching out the principal's face [as she moves you can tell this light is almost behind her, when the sun would be in front - I'd call this the "cheat" light which gives the impression it's all faked] and then we pick out just a hint of broad highlight from the front to give a 'sunny glow' - the giveaway for this, you can see the catchlight in her eyes. 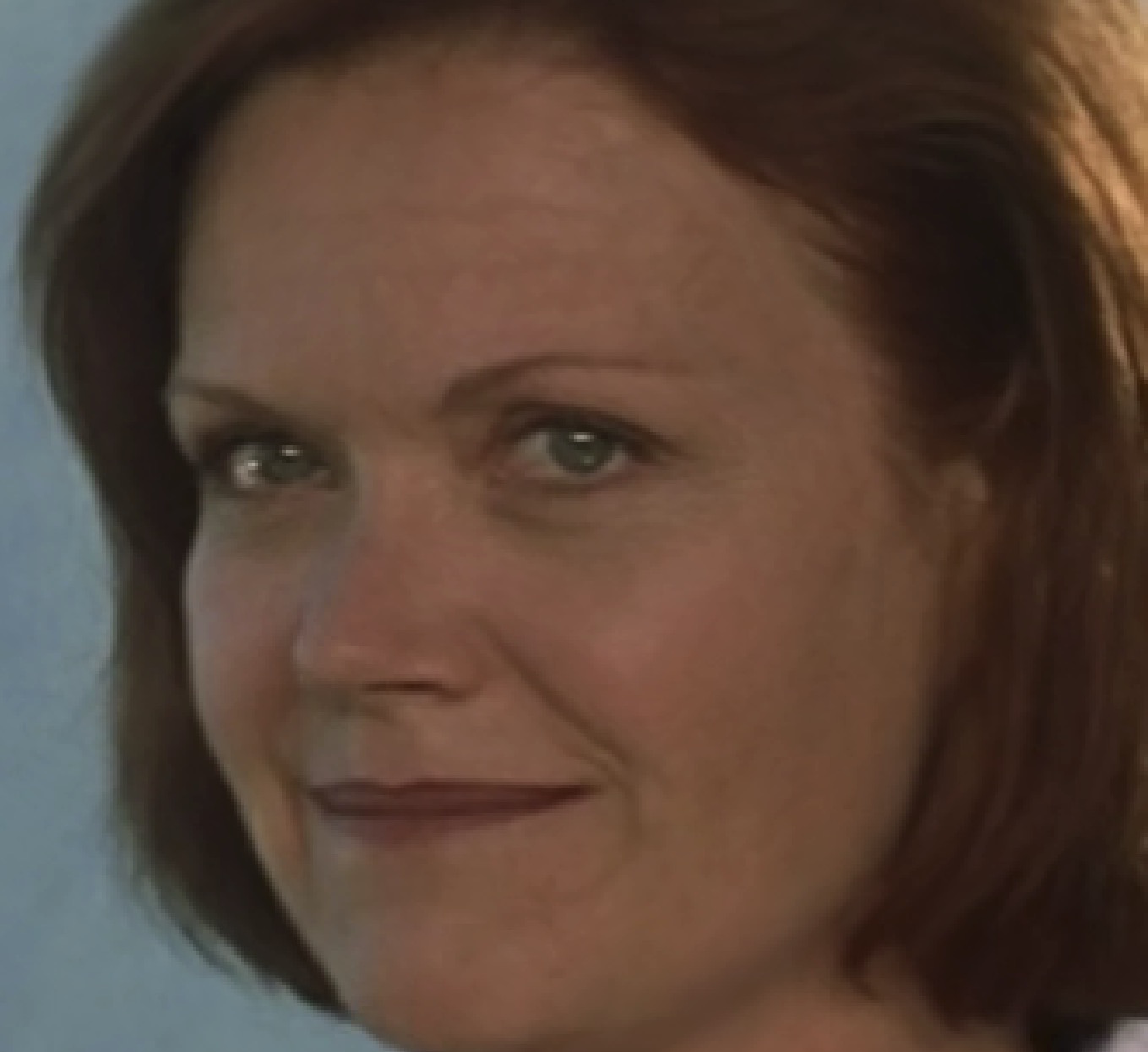 I can see three lights here - a wide, possibly a kino…

which is a broad lighting source in a 'flat' box, & two smaller highlights - one out wide camera-left, one low centre. I can't properly identify these, but at a guess, the one out left will be the one highlighting the left side of her face, another 'sunny' hint, though they didn't put the same gel on it to match the top rear light, which irritates me now I've spotted it;) The kino is flattening what shadows remain with the diffuser in place & adds that sheen/glow right across. The 3rd source might just be a reflector or simple white poly held low [usually by hand], picking up the rear light & lifting up any remaining hard shadows.

So… my guess is real background, one big flag, a few scene lights.

When we were shooting for our short film, there was a scene outcome we desired however during the edit, we realised that the lighting was not enough and we cannot make it to the cut. Hence, I believe it is not about being lazy but a technical glitch leads to using a backdrop. Or the narration can also mount upto using an abruptly shot scene which was later added into the final cut. Movie making involves loads of impromptu decisions which are all behind the scene.

Not the answer you're looking for? Browse other questions tagged cinematography double-jeopardy .

8
How did they get this shot in Metropolis?
6
What is the name of this technique when the scene is morphed into something visually similar?
15
In Fargo, why is the 180° rule broken during this scene?
9
What is the term for this kind of final scene?
8
Why does the action look choppy in Captain America: Civil War?
3
Why did they use handheld camera for very end scenes in Carol?
6
How did they shoot the bowling ball scene in The Big Lebowski?
5
How did they shoot that scene in “The Fall”?
3
Why does The Bay of Silence (2020) use a lot of wide angle shot?