What/who is the monster in the movie “Monster”?

In the movie Monster, what does its title mean?' 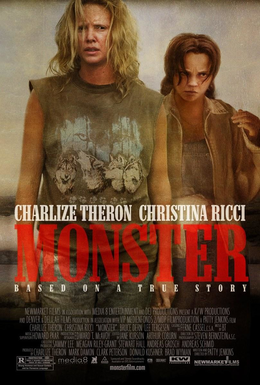 From the movie's poster, I found it interesting that there are two characters but the title is singular, Monster.

After watching this movie, my initial thought was Lee was the monster, but she did not end up being a murderer she was on her own. There were various occasions that people around her, especially her family members mistreated her. So is the monster an abstract description of the environment Lee had grown up in? Even Selby pushed Lee further down to the murder she was by claiming Lee had not done enough to support her financially.

In the movie, Lee briefly introduced to Selby that a carnival in Lee's hometown was called Monster. It was full of fire works and laughters. Could this monster event be the title of this movie?

I read up on Wikipedia, but there was no mentioning of any kind. Any ideas?

According to Chris Newell for Scriptophobic:

The whole purpose of Monster, even in its loaded title, is to reevaluate how people see Aileen Wuornos, both as a person and as a perceived monster.

In a sense, Monster is an anthem for all women who are victims of sexual assault and rape, in how it refuses to accept patriarchal views about women and sex. These views, in turn, affect women like Aileen by using their lifestyle, usually one they did not choose (Although even if they did, it’s their choice to make) against them in saying that they are unable to be raped. Jenkins, and Theron fearlessly engage the audience in this act of brutality in order to hammer home what many of us already know: anybody can be raped, and it’s never the fault of the victim, always the fault of the one doing the raping. The audience can’t excuse Aileen for the rest of the murders, but the film presents her story in a way the audience is able to see why she wound up on such a destructive path after experiencing that level of trauma. In this light, the title Monster takes on new meaning, as in the film becomes an illustration of how a patriarchal society can turn a woman into a monster.

However, according to "Entering the Darkness: Rhetorics of Transformation and Gendered Violence in Patty Jenkins's Monster" by Bryan J. McCann:

Even its title, Monster, which seems inherently problematic given its association with mythical creatures of violence and terror, speaks to this measured view of Wuornos’s crimes. While popular discourse surrounding the film typically deployed the term to cast Wuornos as violently subhuman contra the gorgeous Theron (i.e., Theron "became a monster"), "monster" refers to the name of a terrifying carnival ride that attracted the film’s main character as a child. Jenkins uses the ride as a metaphor for Wuornos’s early flirtations with danger and her steady — largely socially provoked — descent into desperation and violence. Unfortunately, because the film’s release was enveloped in rhetorics of transformation and decontextualized violence, a reading of the monster motif as anything other than a symbol of Theron’s transformation into an abject beast (i.e., Wuornos) was largely unavailable. Thus, while Monster contains important transgressive potential, it was diminished because it was tethered to Theron’s corporeal and emotional "transformation."

Not the answer you're looking for? Browse other questions tagged title monster .

24
Who is responsible for movie titles in foreign countries?
3
Who was the Escape Artist?
8
Who is “The Ghost of Harrenhal”?
7
What is the second part of a movie title called?
11
Who is the boy referred to in the title of the movie “The Boy in the Striped Pyjamas”?
5
What is the meaning of the movie title “The Way Way Back”?
7
What does “fall” refer to in the movie title “Legends of the Fall”
6
What attracted Selby to Lee when she first met her?
31
Who or what is being redeemed in The Shawshank Redemption?
5
What does the `Code 8` movie name mean?