The distorted images in 2001: A Space Odyssey

The final segment of 2001 includes distorted images like below to convey an eerie sense. How was it achieved? Did Kubrick use a different lens for these shots? Can anyone specify the lenses he used throughout the film?

This has so far proven to be a long and not entirely fruitful search.

The generic answer to "what lens is it?" is .. it's a wide-angle lens, very wide - a type known as a fish-eye.
Precisely which one may have to remain speculation. There appears to be a discrepancy in recollection even amongst people who were there at the time.

As to the far broader question of which lenses he used throughout the film, that's a bit harder, but I've found what may be a few specifics.

For the shortest explanation possible in what is a vastly complex subject…
Lenses are termed 'short' and 'long', based on their focal length, measured in millimetres. The term 'short' also equates to 'wide' because of the breadth of view they have, but oddly, 'long' is never called 'narrow', it's called 'telephoto'.
'Standard' human vision is considered to be approximated by a lens of 35mm, so anything shorter is 'wide' and anything longer is 'telephoto'.
To confuse us a bit further, 35mm is 'normal' when shooting on 35mm film but as Kubrick was shooting on 65mm film for a 70mm cinema print, then [because science - you really need to look this up if you have greater interest, it could take a book, or several, to cover this properly] you would need a longer lens to look 'normal'.
A very short lens, 18mm or shorter, will start to be able to see such a wide field of view that it feels like the edges distort unrealistically. A regular phone camera will equate to about 18mm, very roughly, which is why you look a bit squished out to the edge if you're caught towards the outside of the frame in a group shot.
A phone camera is not a fish-eye, though, it's what's known as a rectilinear lens [time to visit google again ;)

Right - whistle-stop tour of focal length over… on with the investigation...

A quick search always puts a custom-built 160° f/2 Fairchild Curtis at the top of the list for that particular shot, but it's not absolutely certain. It's also touted as being used for HAL's PoV [Point of View] shots, but that's also not certain [You will see a pattern to this uncertainty developing, it really seems like no-one actually knows for sure]. The extreme wide-angle lens used for some of the PoV shots of what Hal sees may have been done with a small Nikon fish-eye, specifics unknown, not the Fairchild.
The Fairchild would have been able to fill the frame, this looks like a much smaller lens, though still, of course, a fish-eye.
This is far too different from our bedroom scene shot, plus it's either two different lenses, or it was a very short zoom used at two different lengths [the second shot being even wider than the first], and the lens vignettes to black at the edges.

Kubrick was famous as a lens-collector. Most film-makers rent lenses and send them back afterwards. Kubrick bought them, and chose very carefully. He would have batches of ten sent out of which he'd pick his favourite. He would keep lenses and have them modified to fit different cameras, so he could be using a modified stills lens on a movie camera. He even had some of his favourite prime lenses [a prime is, in effect "not a zoom", it has only one focal length] adapted by Zeiss to new, previously unavailable focal lengths.

In an interview with Christopher Nolan on the recent fully re-conditioned analogue transfer 70mm version of 2001, I spotted this still, with Kubrick and his camera, right on the very set we're discussing. Unfortunately it's not the sharpest image and it's difficult to discern more than the basic shape of the attached lens - which is a kind of 'short triangle' section. So that's about all we've got for identification… 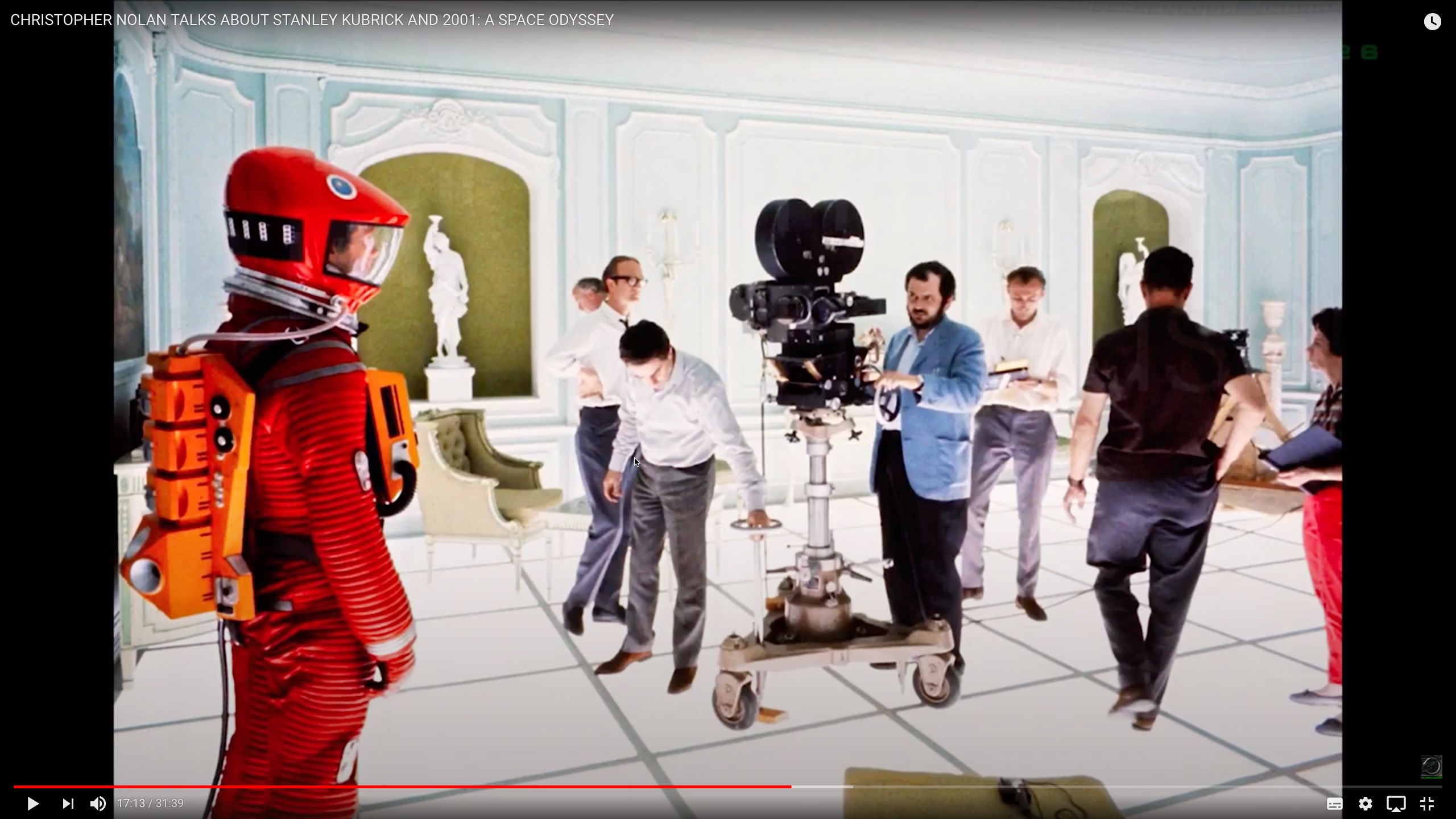 until I found this rather dry old bit of footage from the bastion of cinema, Joe Dunton, Bafta-winning vice president of Panavision and one-time friend and colleague of Kubrick.

From that, I extracted a potential candidate, the Cooke Speed-Panchro, available in 18mm and 25mm variants, which Dunton claims is "Kubrick's favourite lens" 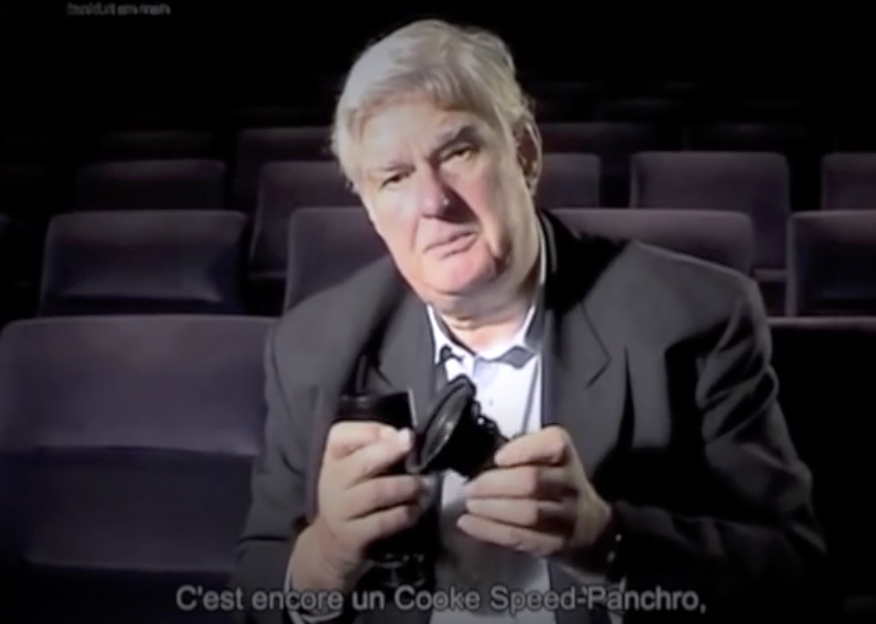 However, I found two more stills of Kubrick on set with camera.
This with a much larger lens 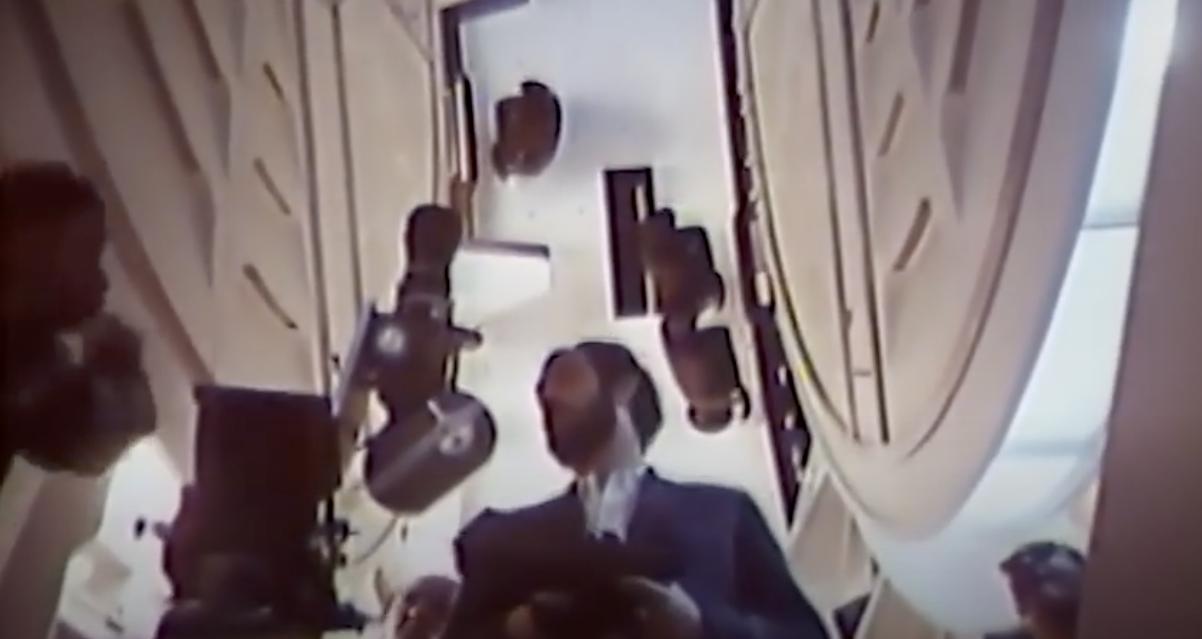 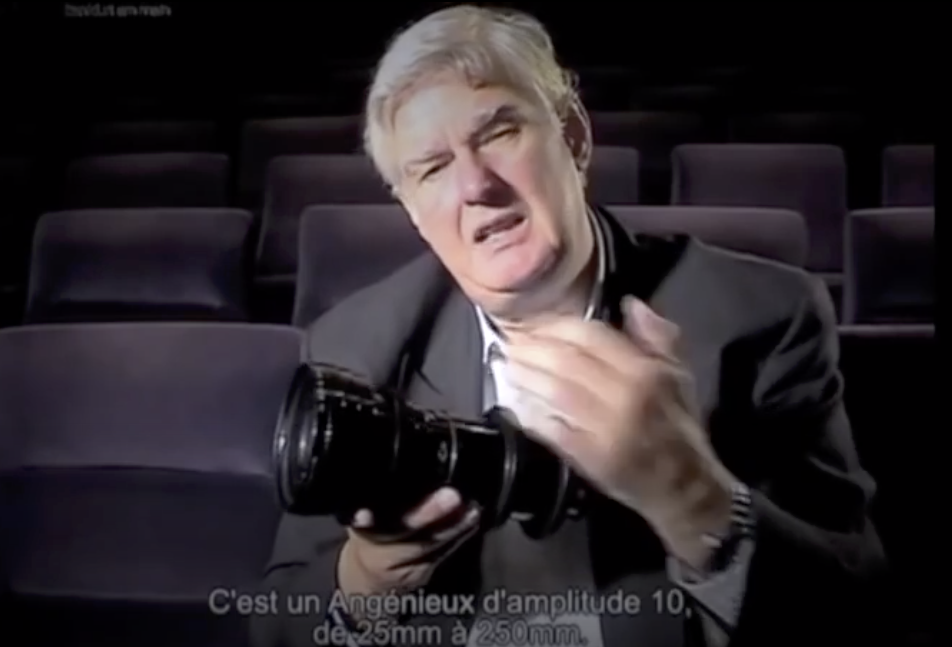 Which, having looked back at some footage, could feel about right for part of the 'exercise run round the space station' scene in the centrifuge. It's a wide shot, but not line-bendingly wide like our original question shot. 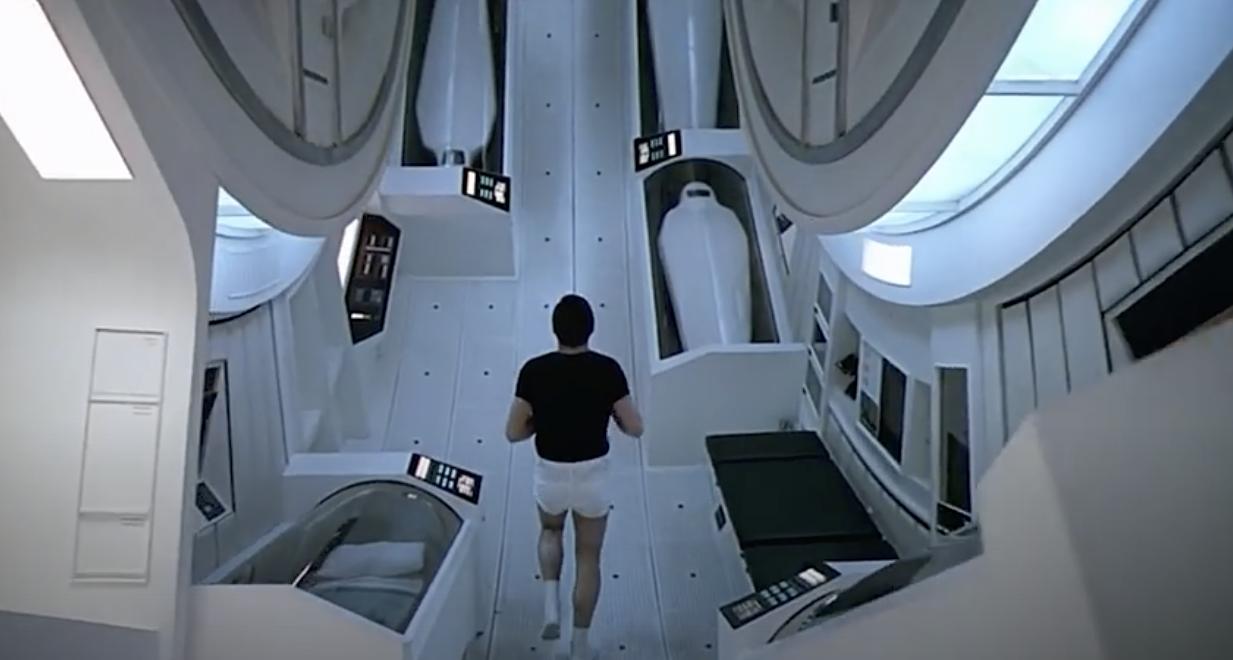 Then, just as I thought I was happy at that, I discovered this reasonably sharp pic of Kubrick… and a lens I can find no mention of - nor can I quite read the text on it, 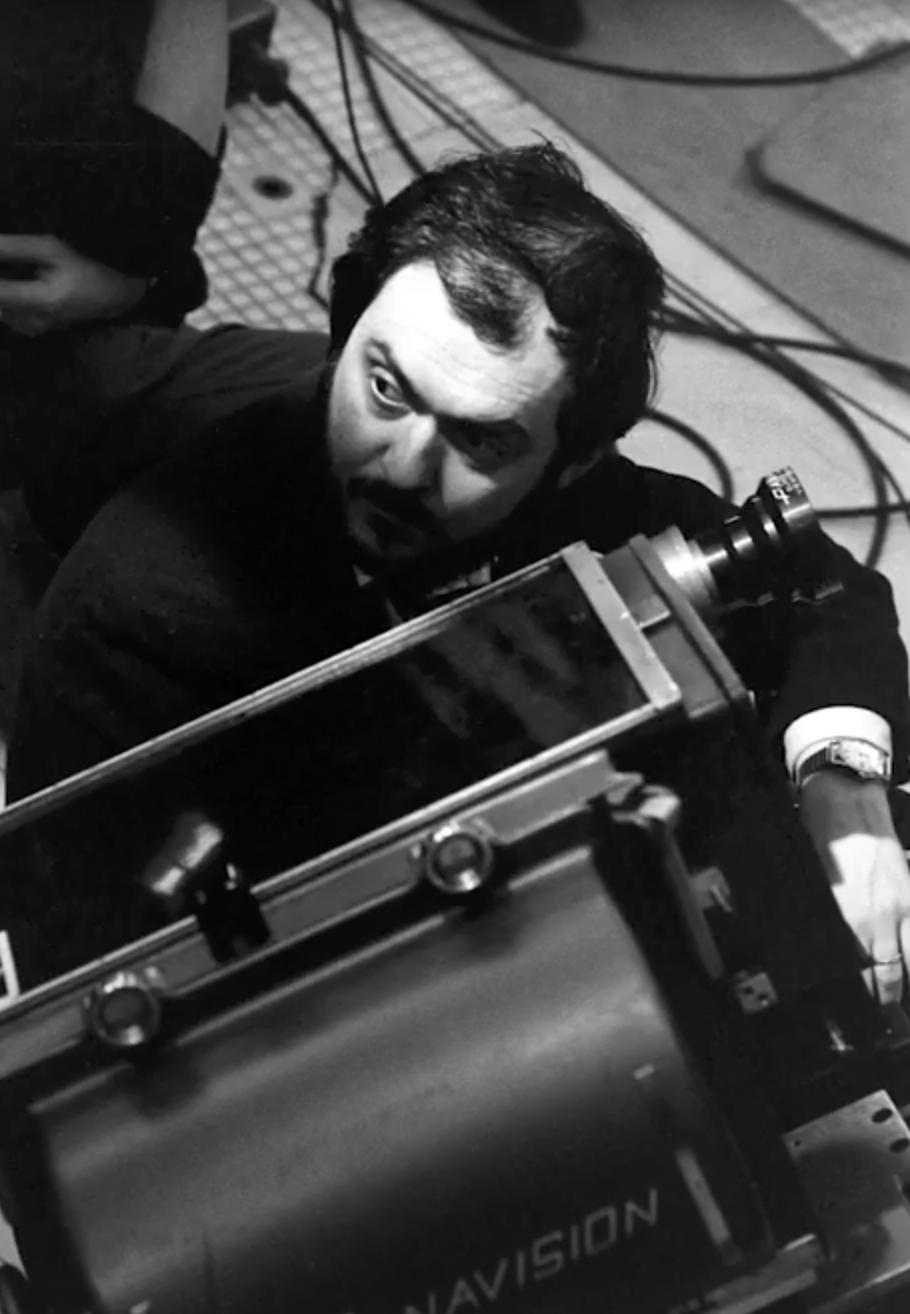 all I can identify is the Panavision logo, which only tells me it's not any of the lenses we've so far discovered. 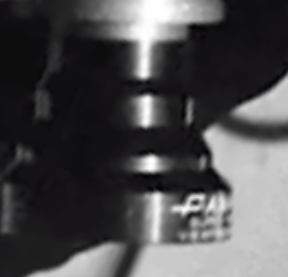 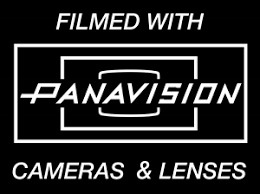 I discovered this snippet in the LA Times about the Fairchild-Curtis. Quote from Doug Trumbull , one of the effects supervisors on 2001

However, from the same article…

In one last deperate attempt to gain more information, I ran the original shot through photoshop's lens correction. The basic trick is to straighten all the bent lines then see what focal length that would equate to. The downside is Photoshop, like almost all still-image processors, is based on a 35mm frame size.
Anyway, to just about straighten the lines, Ps reckons the lens would have been a 7.5mm. It's no more conclusive than anything else I've done so far today ;-) 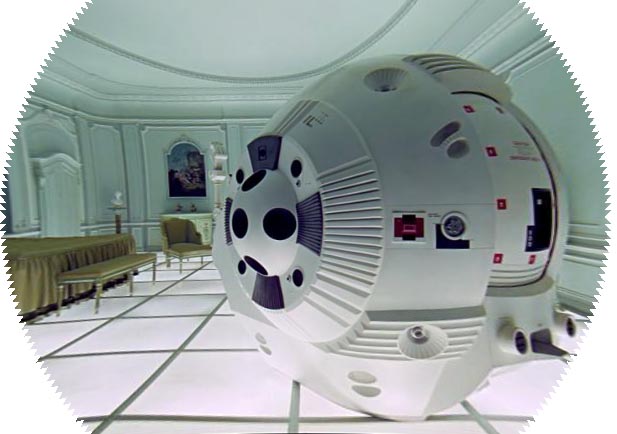 Further research - I found a still of the Fairchild in the pod bay… from How Kubrick Made 2001: A Space Odyssey - Part 4: Jupiter Mission [A] 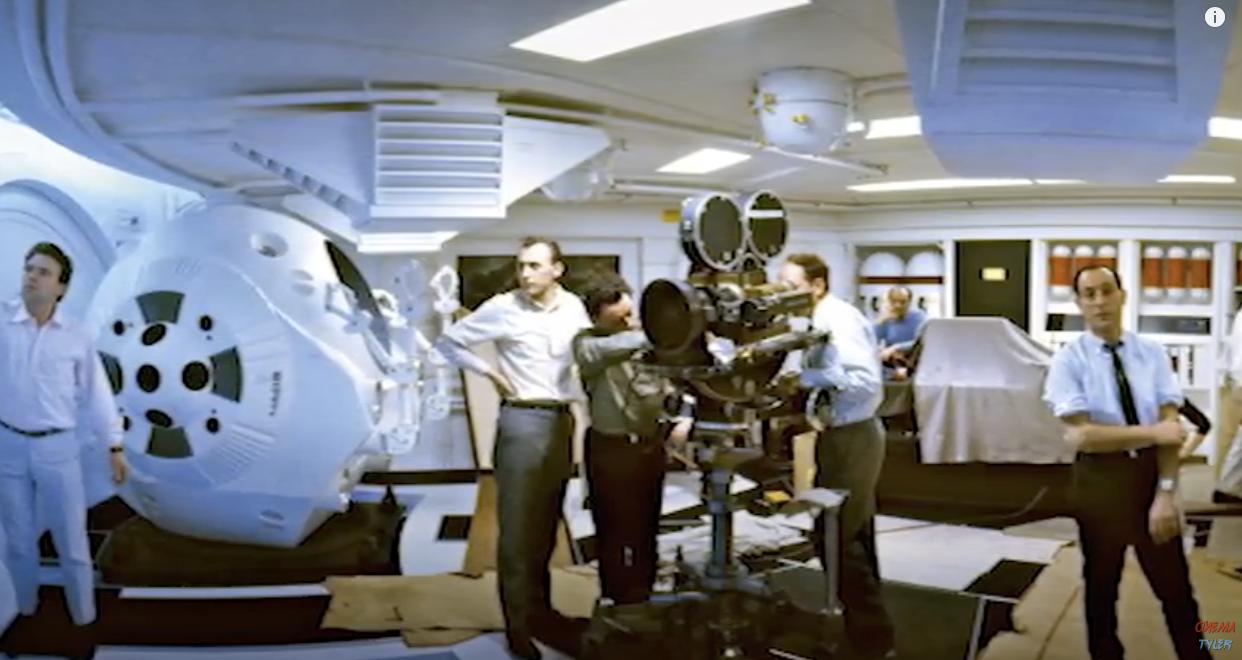 In part 5 of that documentary, we get a shot of the lens used to be HAL's eye - & may be the Nikon referenced earlier 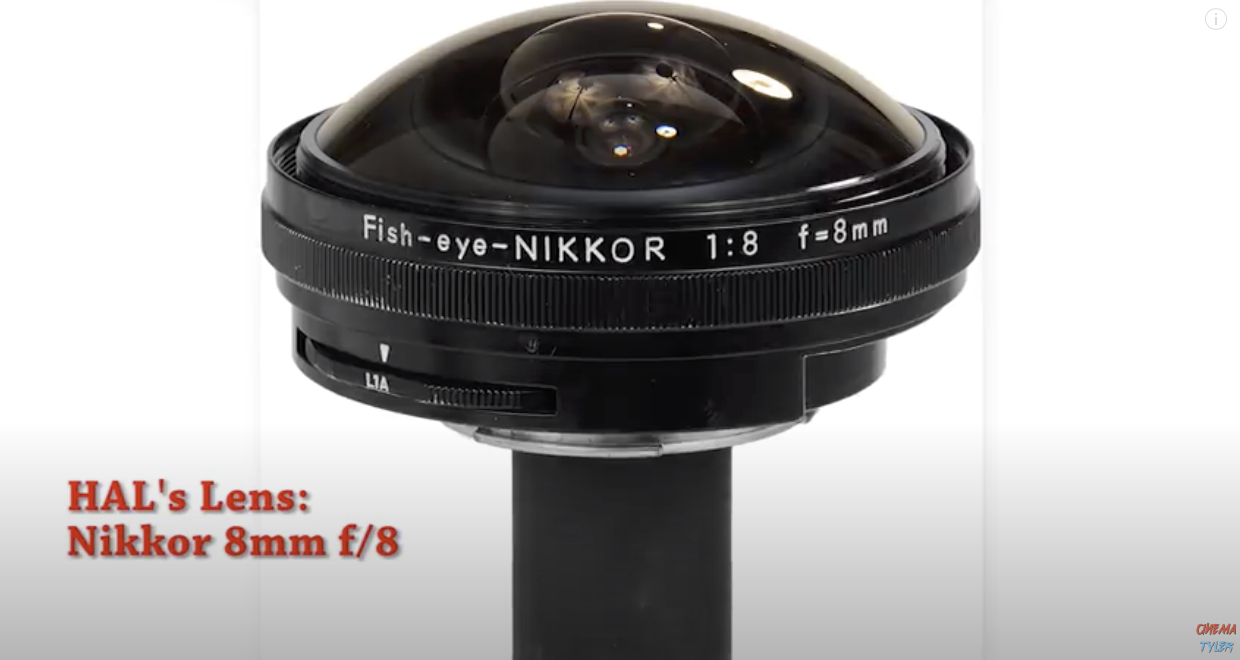 In the movie 2001: A Space Odyssey they used a Fairchild-Curtis custom fisheye lens, as seen on these pictures. Using a fisheye lens creates this specific distorted kind of image. 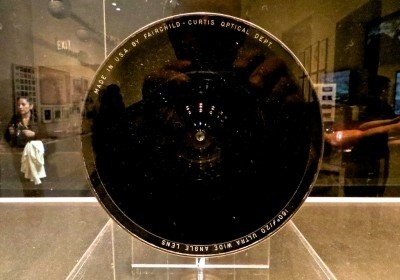 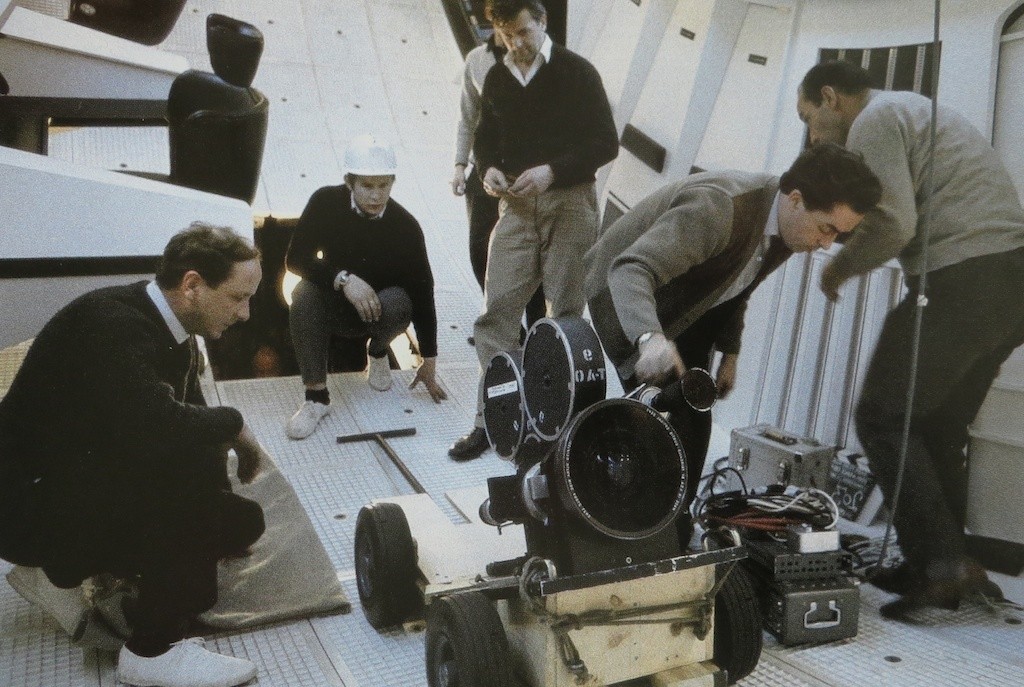