Why didn't the Army Rangers use scoped rifles?

I refer not to weapons that usually has default iron sights like the M249. I'm uncertain if the M16A4 could've been mounted with a forward scope in 1993. 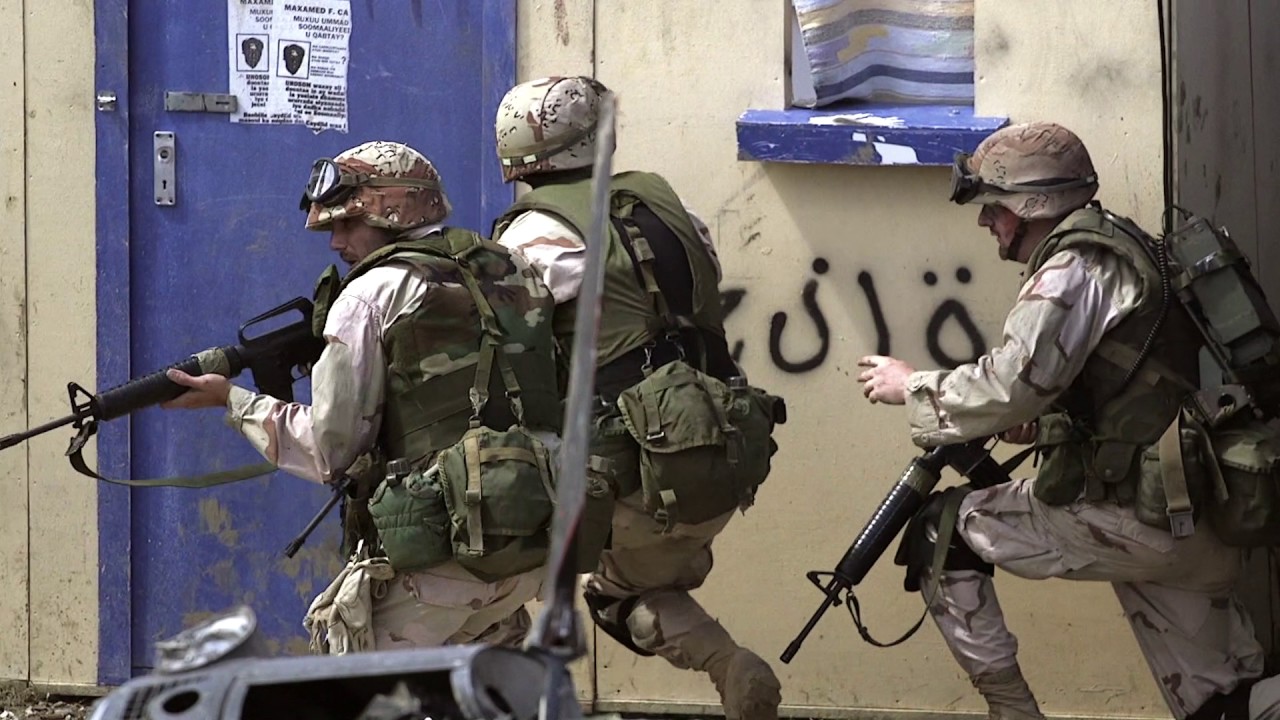 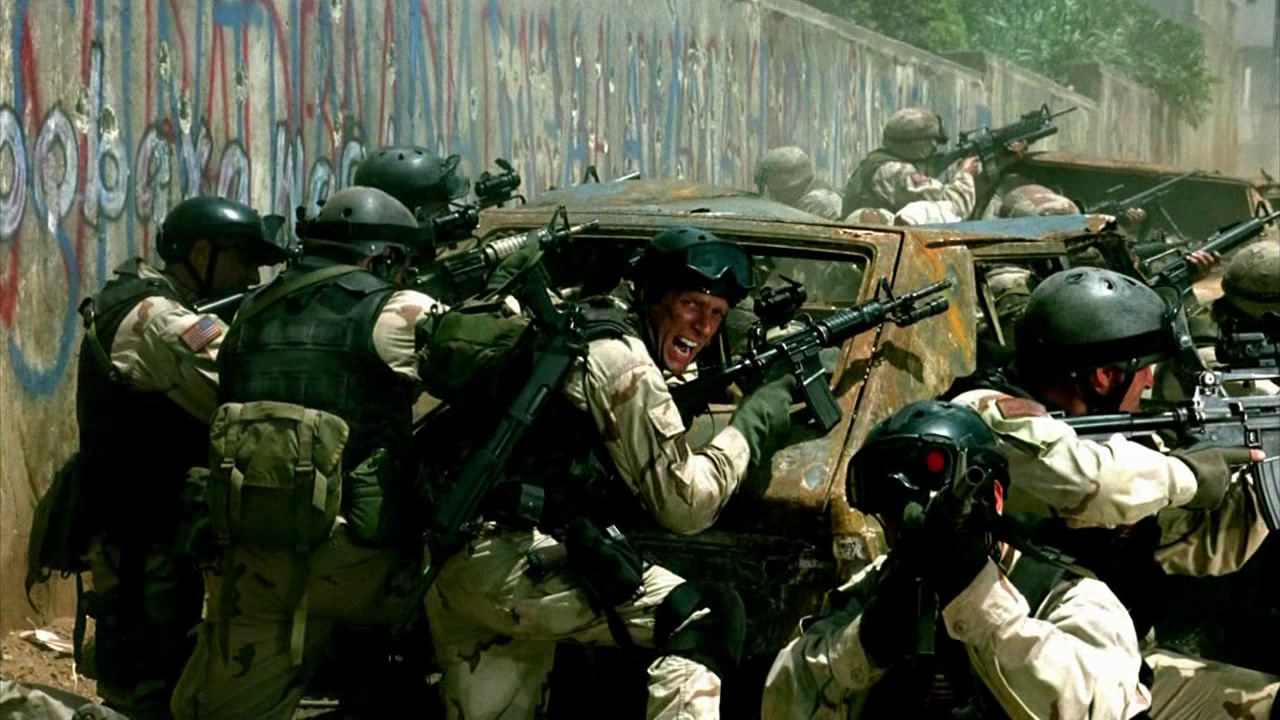 The short answer is Hollywood. The M16A varieties have a mounting hole in the carrying handle.

During the time of this event, both units would have trained with iron sights. Soldiers in units with less regimented structure have more leeway to allow their soldiers to outfit their weapons with more customized gear.

One advantage of standardizing the individual equipment and weapons of a unit is that the gear is then interchangeable. If your gear breaks or gets destroyed, you can easily pick up the gear of another soldier and utilize it. For example, in small, specialized units, each soldier carries certain items in designated places. Each person carries their maps in the same pocket. Each person puts IV kit in the same place in their ruck. So forth and so on. The standard for one unit or unit element might be different than the standard in another.

There are many pros and cons of having a rifle without the added scope. Your situational awareness is better without the scope. The scope tends to limit your peripheral vision unless it is a larger reflex sight, especially, if the shooter only uses one eye. The effective tactical range of the M16A2 is 300 meters. The bullet itself has a much longer range. But past that, the other little factors such as trigger pull and breath control play an increasingly bigger factor than sight picture.

A scope will not fix poor marksmanship fundamentals. With good marksmanship skills a scope is of little consequence at 50-100 meters. At 100-200 meters, a scope may help a poor shooter gain a good sight picture. At 200-300 meters, other shooting fundamentals done poorly will make a good sight picture inconsequential. Under 50 meters, reflex shooting skills relying more on muscle memory and proper stance is more important than which type of sight/scope you use. Often, under that range, shooters will look over their sights/scope instead to their front sight with both eyes. Reflex sights are designed with this in mind. This is especially useful in close quarters combat such as indoors.

This was in the early 90's. Back then scope distribution among all troops was not standard issue for rifles back then. Picatinny rail was still a few years away. SOME of the Rangers in fact did have some scopes. They were just attached differently.

I'm going to take a swing at this and say, it's because the costume designer & props made a joint decision, most likely in conjunction with the director, to provide this difference as one of the aids to the audience in more rapidly identifying who was with which unit.

As everyone is wearing approximately the same colour uniform & faces are not easy to identify in the midst of all the similarity, the audience need all the clues they can be given. The helmet choice was quite possibly a part of this too.

99.9% of the target audience would have absolutely no clue as to whether this was completely realistic or not, nor would they really care.
To most of the audience, they may as well all be carrying the same rifle; most people certainly wouldn't know what model it was & would need far larger clues to identify the players.

There would, of course, be some checking with the military advisors, along the lines of "Is it conceivable that this unit could look like this & that unit like that?" If it was potentially possible, then that's a tick in the 'being able to tell them apart' box.
I read somewhere that the Delta guys did have those odd 'skateboard' helmets. I can hear the costume designer whooping from here at that one.

I can imagine conversations along the lines of,

"Ohh, laser sights! Can they all have them?."
"No, for two reasons - one, it's going to start to look like RoboCop meets some kid's computer game… and two, we can't afford to give them to everyone."
"So can't they have those cool telescope sights instead?"
"No, in movies only snipers have telescopes. The regular guys will just have to do without & only the elite guys can have the cool red dot ones."
etc etc...

You have to bear in mind that most of the people who ever see this movie are not even going to be American, let alone experts on their army's military equipment. To the vast majority of the audience, therefore, they're all just "soldiers".

More broadly, of course, this type of detail-skipping happens in all movies; it's only the ones covering a topic you have a specific interest & knowledge in that you will ever notice.
For similar reasons I have great difficulty watching movies about the music business, or those that are actually about movies and movie-making, as they're industries I work or have worked in, so I can spot every glaring error from a mile away. Other people, of course, would never spot them, so simply don't care.

The Delta snipers tended to be more highly specialized marksmen. Their shooting was more precise, and their dedication was more extreme. They were trained in maintaining the weapon to a higher degree of reliability and accuracy than other troops, as their missions often were more extreme and more dangerous.

Regular troops and even special forces riflemen like the Rangers were used more often, and were used in greater number. They had to be accurate when they shot, but they didn’t stress marksmanship and weapons maintenance to the degree if the Delta snipers. Besides, in combat, rifles tend to get bumped and jostled, and scopes can inadvertently be knocked off zero. Red dot scopes and the like require batteries, which can go dead at the worst possible time. Iron sights don’t have this problem. You can bump or even drop a rifle with iron sights, and you rarely if ever alter the sight settings for that weapon. You also never have to worry about dead batteries.

Not the answer you're looking for? Browse other questions tagged realism black-hawk-down .

14
Why didn't the bomb cause a tsunami in Dark Knight Rises?
8
Why didn't the electric charge affect Holmes when he attacks Dredger?
40
Why do movies & TV use this police radio clip over and over?
10
Why do people in movies commit suicide by slitting their wrists in the wrong direction?
4
Why aren't the planets orbiting Gargantua sucked in?
3
Does the US really use C64 computers for the launch control of their missiles?
21
Do Game of Thrones' crossbows and scorpions work in a realistic way?
6
Why does Sherlock (BBC) use miles?
2
Why didn't the USS Nathan James use air defense with SM-2 and ESSM in the opening scene?