How do production crews film people running down corridors in Star Trek?

In Star Trek, especially the newer series, the camera follows Captain Kirk, Spock, Michael Burnham, etc. running down corridors, turning left or right, and flying by people. It would be convenient if Star Trek movie or series makers could just film it on a real ship--you know, just follow them around, or something. But unfortunately, that's not the case. The corridor sets can't be more than a few meters long--so how do they show people running down corridors and taking turns? I know that quite often the cameras are moving in front of the actors and looking back at them, but they take so many turns.

This answer has become significantly broader than intially envisioned. It is now in three broad sections.
Potential size of set, for high budget shoots.
How to follow rapid movement with a camera.
How to shoot in restricted space.

As mentioned in comments, I ought to address the length of the corridors first.
You are starting from a false premise, that the corridors can't be long - they really can…

I don't personally know any of the large American sound stages, but I wouldn't imagine for a second they are smaller than the ones in the UK, which I do know.
The largest dedicated studio I've worked in is Pinewood's 007 stage, which is 114m long - bigger than a football pitch.

Pinewood's 007 stage. The centre section is actually floodable, so you can do water scenes in there too. 2nd pic is from James Bond, The Spy Who Loved Me, complete with three submarines. 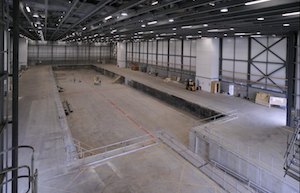 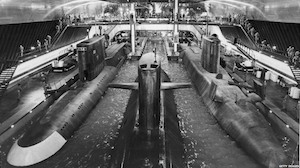 If that's still not big enough, there are some converted airship sheds at Cardington, near Milton Keynes in Bedfordshire, which are absolutely huge, the largest of which is 247x84x55m That must be getting on for the size of a football stadium.

Although it's not soundproofed (and therefore not a 'soundstage'), the shed is proving very useful for building massive sets, and as post-production sound technology improves, the need for soundproofed stages is reduced. The total amount of floor space available (223,000 sq feet, or 5 acres) is over 5 times the size of the largest soundstage available in Hollywood (Stage 15 at Sony Pictures 41,985 sq ft), and is almost 3 times the size of the largest soundstage in the world, Stage 15 at Babelsburg Film Studio in Germany (78,954 sq ft).

It's hard to appreciate how big Cardington is, even when you're standing inside it… but look how tiny this car looks [a big Range Rover 4x4 I think], even though you can only see half of the shed, it's still totally swamped by the building's scale. 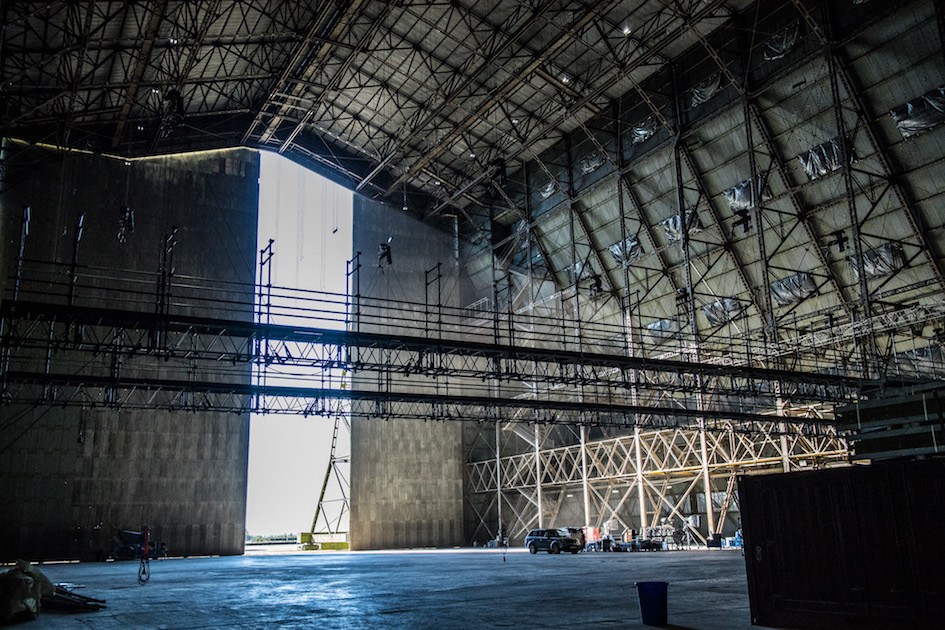 These are in all probability Steadicam or gimbal shots.

Guided by at least one assistant a steadicam operator can run backwards away from running actors and stay ahead of them for quite some time. These guys are not only consummate professionals, but are also incredibly fit; to be able to run whilst carrying between 20 and 50lbs of equipment and also manage to keep it always pointing in the right direction, keeping their subject well-framed. Fortunately, they don't also have to keep it in focus, that's the job of another operator, the focus-puller [or, for PC-reasons unknown, these days known as 1st AC, first assistant camera] , who uses a remote radio-control device and a local stationary screen, to keep the image sharp.

I found a nice article in the NY Times about the invention of the steadicam and some of its more famous uses, which is well worth a look at.

If the action really gets too fast for someone to be able to run along with it, then there are other measures that can be employed. This is a rather unusual one…

or this, done on roller-blades… 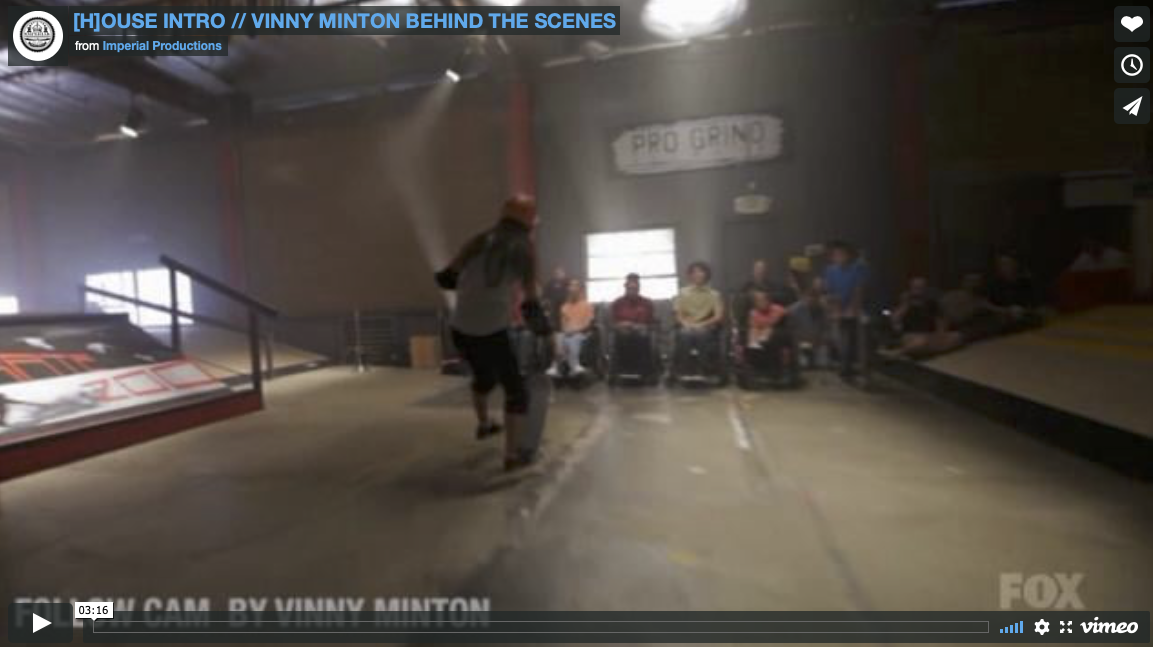 You have to go across to Vimeo to see this one, it won't embed

This fabulous one was done by the operator actually running

Lighter than a traditional steadicam, but only sufficient to carry a modern DSLR or similar, is a device generically known as a gimbal. This is based on similar principles, but much smaller and hand-held, not actually body-worn. One of the guys at the pinnacle of this technique is known as gimbalninja, and for good reason.
See this article from petapixel featuring some of his work - Impressive Stunts to Capture Shots for Nike Ad - which starts with helmet-cam footage of the actual camera operator during one of the takes and ends with the finished advert. Rather impressive.

How to shoot in restricted space.

If it turns out that they actually dont have a stage large enough to have sufficiently long corridors, there are several methods you can use to 'cheat'.

Usually, a mixture of all the above is used, so the audience never recognises they doing what should be called a "Scooby Doo"… running past the same door, clock, plant and monster time after time ;)

There's another trick often used for long-standing, multi-purpose sets which are frequently re-used. The two I know best are for Eastenders and Holby City [neither of which are exactly known for their sci-fi or CGI so a bit of a stretch] These are both constructed with foreshortened walls in certain directions, so your sense of perspective is distorted. Buildings look like they're 15m deep, but are actually only 4m. Additionally, the back of one building is re-used to be the front of somewhere else, or an apparently un-related interior, putting two apparent locations almost in the space of one. 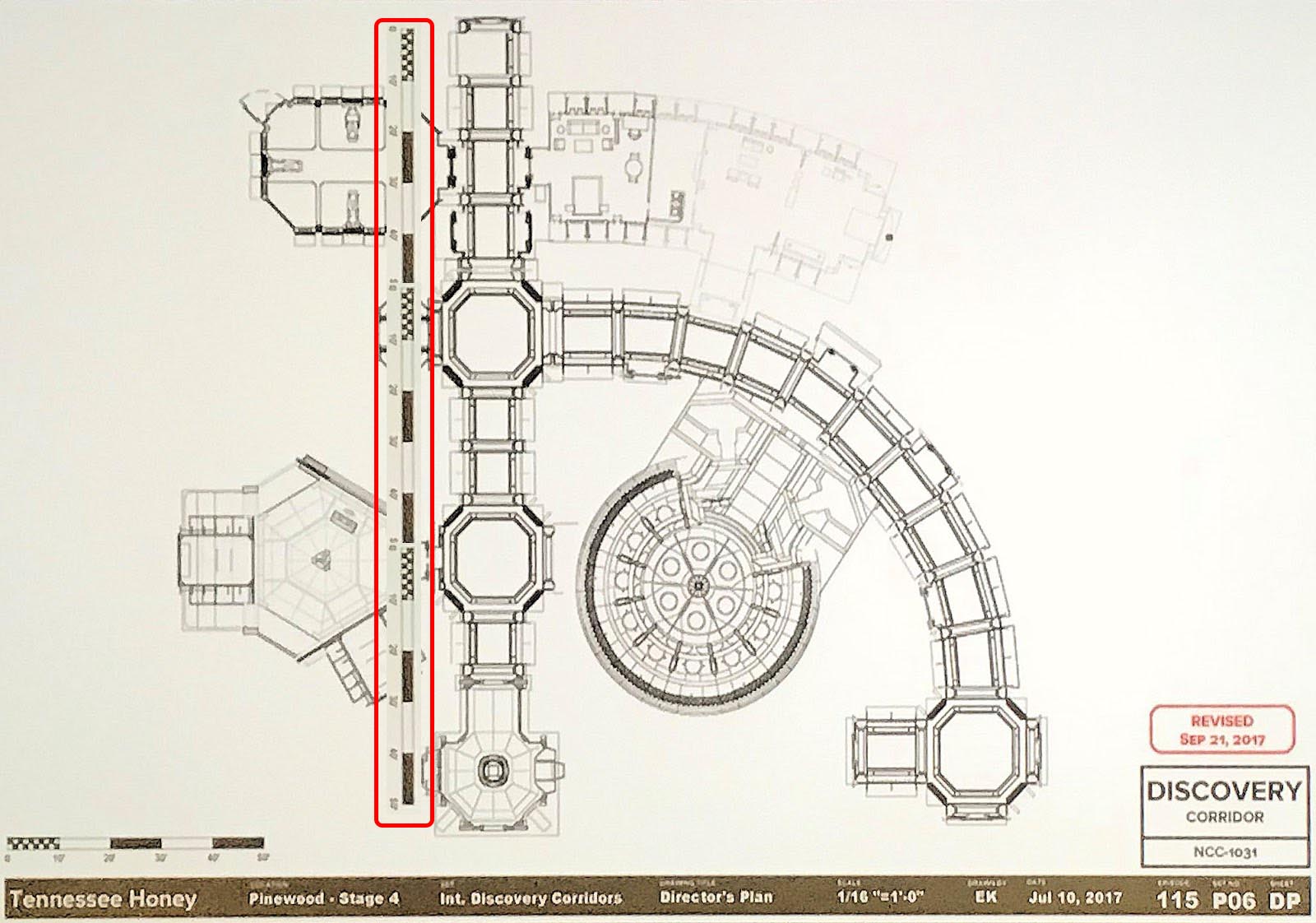 I've very quickly Photoshopped the scale from the bottom of the plan onto the main straight corridor - making it very roughy 150ft, 50m, give or take. So, it's not tiny, but it's not huge… many of the 'small space' shooting techniques will have to be employed to make it feel larger.

This is really quite a clever design, though. They can run in circles for ages; with an occasional cut to a 1- or 2-shot, or a quick reverse of them running away rather than towards camera they can keep running round the same ¼ circle forever. As you cannot see one end of the corridor from the other that gives them broad scope The section of straight corridor can employ the tricks enumerated above; green-screen to cover the corridor end, cuts, inserts, reverses, allowing them to leave frame then pick up from a different position and angle.
Sometimes, that kind of set design is manufactured in a modular construction, allowing different sections to be bolted together in many different ways. One I know for certain did that was Mr Selfridge. Those endless corridors in the offices you see in the final show… was really just four main corridor segments, with different rooms off to the sides, in endless combination. The sections were all on wheels for ease of movement.

Not the answer you're looking for? Browse other questions tagged production film-techniques props effects .

4
How do movie crews film/control babies and toddlers at the same time?
2
How do film producers and crews film movies based on entire or just a proportion of towns and cities (real cities and towns)?
8
How did they film Jim Craig's descent down that steep hill?
2
How long are TV shows typically awaiting airing after completion, Star Trek: Picard in particular?
2
How are Star Trek ship explosions produced?