In 'The Wicker Man', why do they sacrifice humans, specifically?

It's been a while since I've seen The Wicker Man, so I'm sorry if this is very common knowledge, but I can't really remember why they sacrifice humans. Something about the fruit trees growing further north than they should, perhaps? But do they ever name which god/goddess they're specifically sacrificing to, or any more specific reasons for doing so?

After an animal sacrifice failed to yield a crop, it was decided only a human sacrifice would work

As noted by in the conversation between Sergeant Howie and Lord Summerisle, the villagers decided that human sacrifices were ‘powerful’ enough.

They still included the animals in the sacrifice, presumably for more ‘power’ and because they were the original sacrifice. 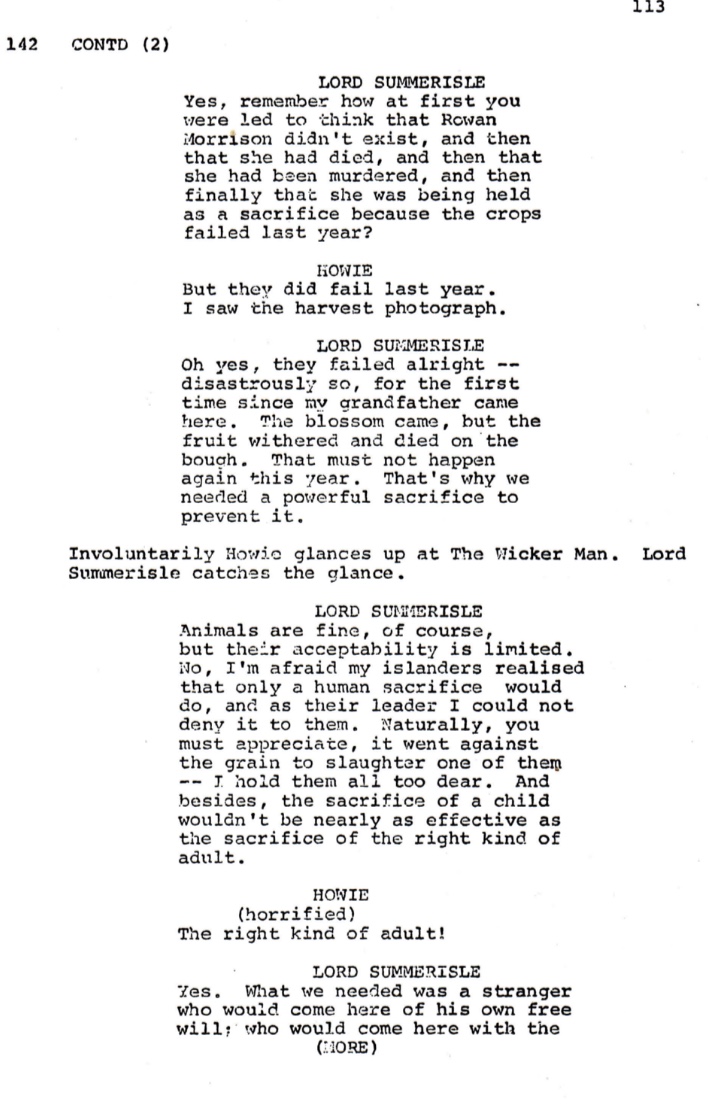 The ‘old gods’ referred to in the script, and who the sacrifice is for, are mentioned by the Lord:

This year at the procession's end, as has already been proclaimed, a holy sacrifice will be offered up jointly to Nuada, our most sacred god of the Sun, and to Avellenau, the beloved goddess of our orchards, in order that we may furnish them with renewed power...to quicken the growth of our crops.

16
Why does Bane's henchman sacrifice himself?
44
Why do the machines keep humans alive if they have nuclear reactors?
4
Why don't humans become Walkers when eating other humans who are infected?
5
Why does Sgt. Howie never seek out the person who filed the police complaint in The Wicker Man?
2
Why was the Refinery in the Planet Jupiter, specifically?
48
What happened to the humans in "Cars" (that is if they ever existed)?
21
Why was this sacrifice sufficient?
2
Why target Billy Bauer specifically?