Where do Gregor and Konrad meet up with British soldiers in episode 4 of World on Fire? How could they have gotten there alone?

In episode 4 of World on Fire, Gregor and Konrad meet a British army unit in the scene that starts at 32m57s after the two had last been seen escaping (while there was still snow on the ground) a German Army unit after killing a German soldier whose gun jammed at 7m55s. My initial assumption when the later scene began was that they were still in Poland, but that doesn't make sense, because what British army unit would have been as far east as Poland in the spring of 1940. That's on the other side of Germany from France and Belgium.

The scene at 32:57 onward does look warmer than their previous scene, suggesting more time (perhaps months) had passed than is indicated by the connected conversation (Konrad is still defending his shooting of the German soldier in the earlier scene). But still, where would the two be? Belgium in May 1940? Does this mean they had travelled all the way around (or through?) Germany/Austria alone, rather than having met up with British before then and joined one of the allied Polish units fighting in exile? The "On next week's episode" clip appears to show Gregor at Dunkirk, suggesting he went along from this point in episode 4 with evacuating British soldiers in the North.

They've met them somewhere in France

As the OP correctly assumed, British forces didn't join the Polish ones, so the only way for Gregor and Konrad to meet them would be in the west - in France or Belgium. This is the map of Europe in the 1939: 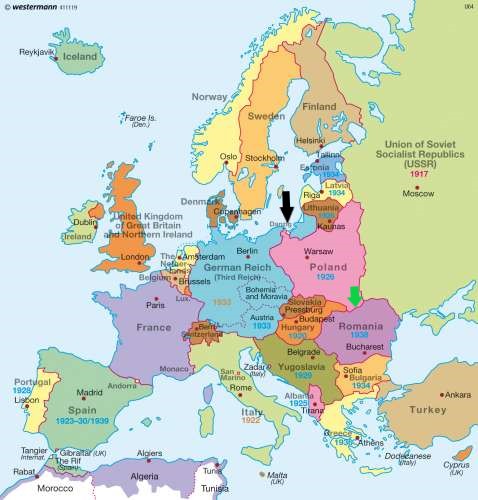 In the first episode, we can see Grzegorz fighting in Danzig (marked above with the black arrow).

In episode 2, we can see them arriving at occupied Warsaw, which capitulated on 29th of September.

In episode 3, we can see them in eastern Poland, in the Soviet zone. Why?

As you can notice, Poland had a narrow border with Romania, who while being nominally allied with Poland has remained neutral (the Polish government decided it might be better to keep it as a safe haven rather than active ally). This border area has been initially designated as a "last stand", in which Polish forces were supposed to wait for British/France forces invasion on Germany

From the Wikipedia (Romanian Bridgehead)

The plan was a fall back plan in case it was impossible to defend the Polish borders, and assumed that the Polish forces would be able to retreat to the area, organise a successful defence until the winter, and hold out until the promised French offensive on the Western Front started. Rydz-Śmigły predicted that the rough terrain, the Stryj and Dniestr rivers, valleys, hills and swamps would provide natural lines of defence against the German advance. The area was also home to many ammunition dumps that were prepared for the third wave of Polish troops, and was linked to the Romanian port of Constanța, which could be used to resupply the Polish troops.

However, when on the 17th os September Soviet Union has attacked from the east and quickly started to threaten to cut off that area:

The Soviet Union invaded from the east in early hours of 17 September, breaking the non-aggression pact with Poland, while the French, despite their promises, had taken no significant offensive against Germany, making it impossible for the Polish army to hold out, at least in eastern parts of the country. In the late hours of that day, the Polish government and members of the military high command crossed the Polish–Romanian border with the intention of moving to France where the Polish forces in the west were being formed.Polish units were ordered to evacuate Poland and reorganize in France.

So the characters from the series were following the general evacuation routes and managed to evacuate via Romania, neutral Yugoslavia through Austra to France

"Up to 120,000 Polish troops withdrew through the Romanian Bridgehead area to neutral Romania and Hungary. The majority of those troops joined the newly formed Polish Armed Forces in the West in France and the United Kingdom in 1939 and 1940."

The movie doesn't describe the exact route but from the events of the movie we could assume that they were going through the southern Austria and Germany, probably trying to dodge the Sigfried line on the German-French border. Another possibility was going through Italy, which while was officially allied with Germany surprisingly allowed transferring "Polish workers" from Yugoslavia to France, but then they either got lost or were deliberately seeking some soldiers so they went straight north on the France border until they've encountered Germans and later British soldiers.

Is that route possible? Yes, but it's quite an unlikely one. Once they were outside of Poland they could easily join other groups of soldiers and safely go via ship or train and end up in southern France (or North Africa), relatively far away from the combat for a while.

Not the answer you're looking for? Browse other questions tagged historical-accuracy world-on-fire .