Does a theater company pays the Film Exhibition cost upfront?

Looking at AMC's expense report for each quarter they are paying about 400 millions each quarter for "Film Exhibition Costs".

What is this expense relate to? Cost of licensing to show the a specific movie? Is it paid upfront? Or after view/ticket count has been calculated per movie? 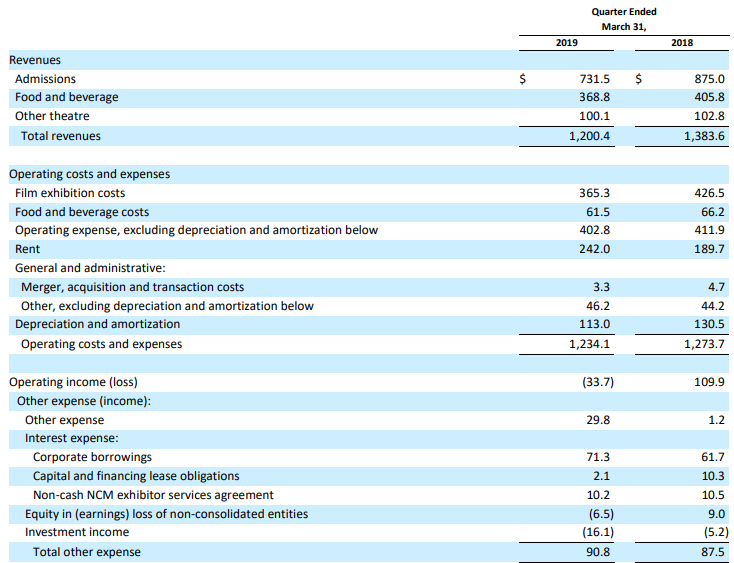 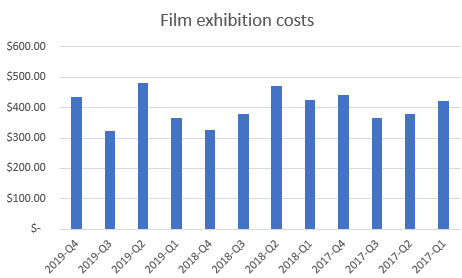 And Attendance in thousands per quarter: 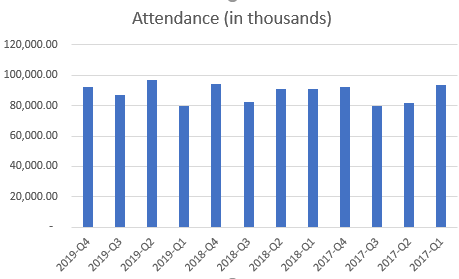 Then finally I looked at Film Exhibision Cost in dollars per each attendance for each quarter: 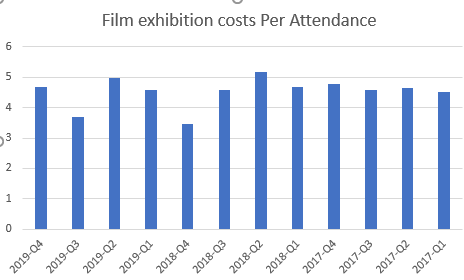 It might be different these days with digital projectors and all, but back in the day when I worked for a theater corporation, a huge amount of expense for a given film was the cost of "the cans" - the hexagonal cans the films came rolled up in before they are spliced together (like depicted in fight club)

This may have had other more itemized expenses within it, but in general the lease cost of a can for x amount of time was a set amount - like $25,000 for some. More for others. The ticket sales were factored to absorb the cost of the cans, which is why the managers always assert that the theaters make nothing on ticket sales and are kept afloat by the concessions. I imagine this has changed a bit since I was around back in something like 2003.

It's possible that this expense you're looking at is a combination of the cost of the cans along side any additional exhibition expenses that can be tacked onto that - possibly machine maintenance, possibly that stupid fee businesses have to pay if they have any copyright music playing in lobbies, or pre-show, and expenses related to something like a contractual failure to run a single show or a run of a show.

I'm actually surprised it doesn't more closely reflect the admission sales. But once upon a time, and my memory is failing me, I had the impression that all ticket sales went back to the leasing agency except some tiny amount like 25 cents per ticket.

This cost is directly related to licensing each movie.

Each movie has a contract to license the movie ("terms"), which are negotiated with the exhibitor/theater on a per movie basis. The contract will specify a certain percentage of box office ticket sales which are due to the film distributor. There will also typically be a minimum charge of a few hundred dollars (to cover the production of the copy of the movie and the delivery of it to the theater) that will be owed if the amount owed from the percentage doesn't meet that threshold. It is quite rare that these actually get charged as most theaters will sell enough tickets to owe well over the minimum charge.

A typical set of terms will say that the movie distributor is owed anywhere from 50 to 75% of the ticket sale price for first-run, new release Hollywood movies. Some movies will have a scale where the percentage price goes down over a number of weeks the longer the theater keeps the movie showing. Other movies will have a scale which sets a fixed percentage over all weeks which the theater shows the movie, but that percentage is determined by how much the movie makes in total at the box office nationwide of worldwide (ie. the more the movie makes in total, the percentage which will be owed goes up). For an older release (more then a month old), or some small "Mom & Pop movie" 30-40% is typical.

The theaters are required to provide a record of ticket sales to the movie company, most of which are done electronically through the theaters ticketing system, without any human intervention at the top of the hour every hour.

At the end of each week (a week usually runs from Friday to Thursday), the theater and movie company will double check their numbers, and then a payment will be issued (usually via wire transfer, else by check) to the movie distributors bank account at some point in the following couple of weeks.

So in short, the movies are never paid for up front, they get their payment in the days and weeks after the actual show.

The one exception to this, where either a small theatre is just starting in business, or were some theater/chain has a long record of not actually paying their bills in a timely manner, they may be asked for an "advance", where they are required to pay a sum of money up front in order to obtain a license to show the film (and a copy of the film itself). This lump sum will then be used as a payment towards whatever amount owed (calculated by the percentage described above) during settlement after the week(s) are over.