In Trolls World Tour, why is Branch grey again?

At the end of Trolls, Branch finds his true colours and his grey skin and black hair return to the vivid blue colours he had as a child before his grandma died.

In Trolls World Tour he's back to his old sad colours again.

What happened? Why didn't he keep his true colours? 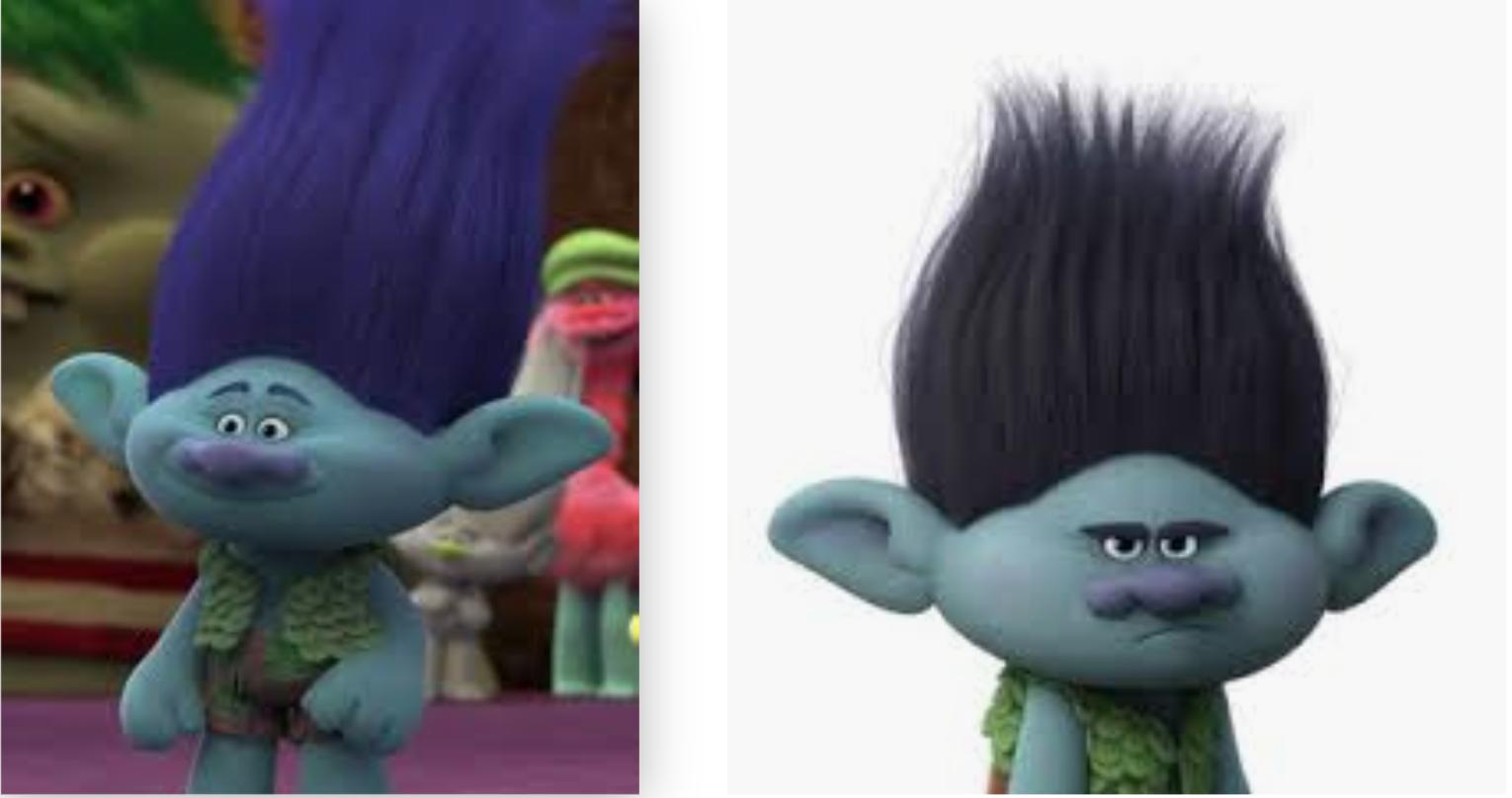 If you watch the part where Poppy, Branch and Biggie sing the pop mashup in the country western town, Branche's hair is purple and his skin is a brighter blue. I think that singing makes Branch happy so his colour goes bright. But when he isn't singing, he is in his normal negative self so his hair goes black and his colour dulls. All the other trolls in pop town are happy and singing 100% of the time so their colours are bright all the time. Branch only sings happy songs with poppy rarely. (https://i.stack.imgur.com/6yo2d.jpg)

From what I have seen, there are 3 possible options.

One: Branch has depression, and though he has good days, he often has bad days, as many who suffer from depression never fully get rid of it, it just kinda... goes away for a moment and lingers quietly till it's ready to take hold again.

Two: (and please know I got this from a video theory on Youtube. They do much better explaining it and supporting the idea) Branch is a Hybrid, or rather isnt fully Pop troll. And the more he sings pop songs or acts like a pop troll singing and being happy, the more color he has.

The person who's video I watched pointed out that Branch has more pointed ears then most pop trolls, more like a rock troll who seem to be more gray/black in color. And as we never see Branch's parents in the original movie only his nan who passes away when he was young, it is a open possibility.

and Three, probably most boring answer:

The people in charge of the movie thought kids are stupid and figured they would not be able to identify Branch if they changed his color too much from how he originally was in the first movie.

OR they found gray/black materials for toys much cheaper and made the movie makers go with that.

I think it's to stick to his main grumpy form, because when he gained his True Colors back, the colors might be that vibrant because he had finally gotten them back, then they turn down a little through time.

Not the answer you're looking for? Browse other questions tagged character trolls trolls-world-tour .

3
Did Loker ever start getting paid again?
6
Why doesn't Grey allow Anastasia to touch him?
13
What happened to other characters from previous movies of Jurassic Park in Jurassic World
55
If Agent Smith is just an AI program, then how could he end up in the real world?
44
Is the 2016 movie Trolls about opium addiction?
2
Did the outside world suffer extensive destruction during the time loop?
9
Why, in the other world, were Ms. Spink and Forcible's button eyes white instead of black like everyone else's?
25
Who is Aslan in the Pevensies' world?