Pathfinder in "The Martian" split images?

In the movie "The martian" (2015), Mark sends an image to the JPL team asking Are you receiving me? Yes No. The JPL team then received multiple images that are then moved around. (Check gif below)

Why was the image sent like this and why didn't all the smaller images have the same size?

Because this is how Pathfinder takes images. Most of the images you see from the Pathfinder rover are many images stitched together. Some are fairly good stitches like so:

(Even then you can still see artifacts).

Some of them are not so good: 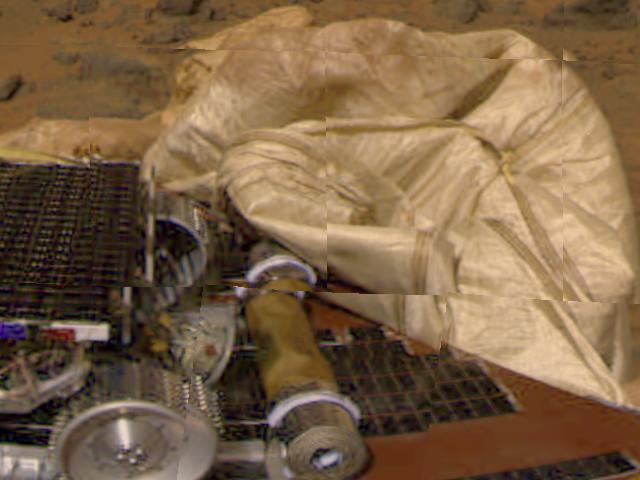 Though the images themselves are usually the same size. Out of universe, it was most likely done because a dozen smaller images shifting around looks better and is easier to see what's going on than if they did four really big images. In universe, you could argue that the team at NASA had pre-cropped some of the images to make it easier to fit in place. In reality, they would probably use an image stitching software and we wouldn't actually see this, but that's not as entertaining.

13
Where did Mark Watney get the escape pod in The Martian?
13
Did Matt Damon actually lose weight for The Martian?
8
Why did HFPA put The Martian under comedy?
4
How far did Watney drive to get to the Pathfinder in "The Martian"?
6
Use of NASA signage in the Martian?
7
What happened to Rover 1 in The Martian?
10
Pertaining to The Martian, what is the ratio of SOLs to Earth days?
6
How did NASA astronauts launch the pod from Mars, though they were at millions of Kilometres away?
60
Was a supercomputer really needed in "The Martian"?