Why did Mr. Funsten serve Dr House with court papers?

Mr Funsten is an outpatient at the hospital who sees Dr House for a boil infection in his right thigh. While conversing with the patient Dr House could have a little peek into the patient’s background and build up a story of him having sued other doctors, quick and easy, which also happens to be right because we see this patient serve court papers to Dr House eventually.

Why did the patient do so without Dr House committing any error ? Secondly, why did he want to take away the papers from Dr House and why didn’t Dr House hand them back to the patient ?

Why did the patient do so without Dr House committing any error ?

HOUSE: Hey! Mr. Funsten! I was wondering when you'd be back. You've got some papers for me?

HOUSE: I certainly hope so.

HOUSE: What? Too cheap to get your lawyer to serve it for you or is it just more fun this way?

Funsten is a 'slip-and-fall guy', someone who fakes an injury to initiate a lawsuit that he hopes gets quickly settled out of court. Dr. House recognized this pattern of behavior from his medical records earlier at the clinic and was half expecting Funsten to show up at some time after the clinic visit. Funsten now seems to be claiming 'mental duress' due to the care he received from Dr. House. 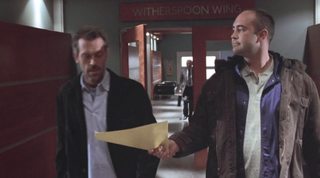 Secondly, why did he want to take away the papers from Dr House and why didn’t Dr House hand them back to the patient ?

HOUSE: Well, maybe you're right but I have the lab results that say you do. Could be a false positive and normally I'd run a second test but since you're here I'll just go with the first.

MR FUNSTEN: You're just trying to scare me.

MR FUNSTEN: Well, I'll be sure to let my wife know.

HOUSE: Oh, don't bother yourself. The state will call for you. Look, if you're clean, I'm sure it'll all blow over. No big deal. But there's an easy way to find out. Get one of your doctors to run a test.

<Mr. Funsten tries and fails to snatch the manila folder back from House.>

HOUSE: Uh-uh. These are mine now! I'll see you in court.

Mr. Funsten had driven 70 miles out of his way to seek medical care away from his hometown of Maplewood, New Jersey because he had a habit of suing doctors and no one closer would treat him anymore. Dr. House essentially blackmailed Funsten into dropping the lawsuit by intimating that he would publicly reveal Funsten had gonorrhea (which he likely did not). Additionally, House kept his copy of the court documents in case Funsten decided to change his mind. The legal papers of a dropped lawsuit might also benefit the next doctor down the road that Funsten decides to frivolously sue. 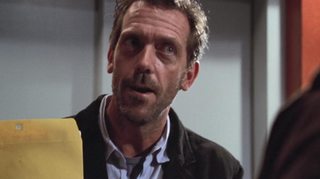 Not the answer you're looking for? Browse other questions tagged analysis house .

4
Why did House ask for Ketamine?
3
What did Gregory House see when he electrocuted himself?
5
What actually happens between House and Stacy Warner that she left House in House MD?
5
How many patients did House and his team treat?
8
Why doesn't House prescribe vicodin himself?
5
Why did House hire Chase after Chase's dad called?
1
In House MD Babies & Bushwater why did Vogel cancel the c-section?
1
Why was House cancelled?
3
How does Dr. House get his patients?