Where was Camp David set up for The West Wing?

What location doubled as a stand-in for Camp David specifically for The West Wing's Season 6, Episode 2: The Birnam Wood? It appears to be an outdoor location and not a closed set, hence the question.

Doing some research, I have come up with Little Hunting Creek described as "The Back Drop" for the episode.

Little Hunting Creek served as the backdrop for an on-location shoot for NBC's "The West Wing."

Baltimore fly fishing expert Theaux LeGardeur, who helped script fishing scenes, kept busy between takes Monday by tossing cicadas into the stream. Each was devoured instantly by the trout in the well-stocked section of the stream.

As LeGardeur prepared to teach actress Lily Tomlin the basics of fly fishing, he wore a few home-tied flies on his chest that resembled cicadas.

"I think we'll catch one today," LeGardeur told The Frederick News-Post. "Ladies are lucky at fishing."

Tomlin, who plays the president's secretary on the series, said she was enjoying the surroundings.

"I'm going to buy this place," joked Tomlin, referring to the remote lodge near the Camp David presidential retreat in Western Maryland. "Right now I'm haggling over the price."

Martin Sheen, who plays President Josiah Bartlet on the series, didn't fish, saying he didn't want to disturb the fish in their natural environment.

"I don't fish," said Sheen. "I think fish belong where they belong."

As for other filming locations, The West Wing Fandom Wiki sites that some of the interior scenes were shot near the actual Camp David!

And according to IMDb, several scenes were shot at Warner Brothers Burbank Studios on a few stages: 23, 28, 28A, and 29

The Whitehouse and Camp David Helicopter scenes were filmed at Maple Run Golf Club in Thurmont MD. The Helicopter struck a branch on the first day and was stuck only doing ground runs for the shoot. Subsequently, a tree had to be removed in order to tow the helicopter to the Camp David landing sight on the other side of the Golf Course. 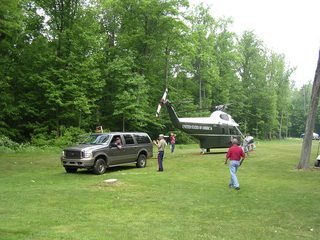 Not the answer you're looking for? Browse other questions tagged film-location the-west-wing .

5
Secret Service codenames for West Wing characters
2
Who recorded "The West Wing Theme"?
6
West Wing reasoning behind mocking people who say "there but for the grace of God go I?"
4
Why was Leo McGarry chosen for this?
7
Why does Josh have a gun range target in his office?
2
Where was The West Wing shot?
27
Where was this scene of 'Highlander: The series' with standing columns shot?