Why didn't V defend himself as soon as Peter Creedy and henchmen started shooting V?

V has Olympic-level reflexes, enhanced strength, speed and dexterity as well as expanded mental capacity, and relies on his wits and his planning to get in and out of any confrontations.

Doubtless he could've foreseen, and prevented himself from, being shot by Creedy and his henchmen who "swept the place clean". Even as they shoot him, V just stands there until they run out of bullets. Only after, V starts throwing his knives! 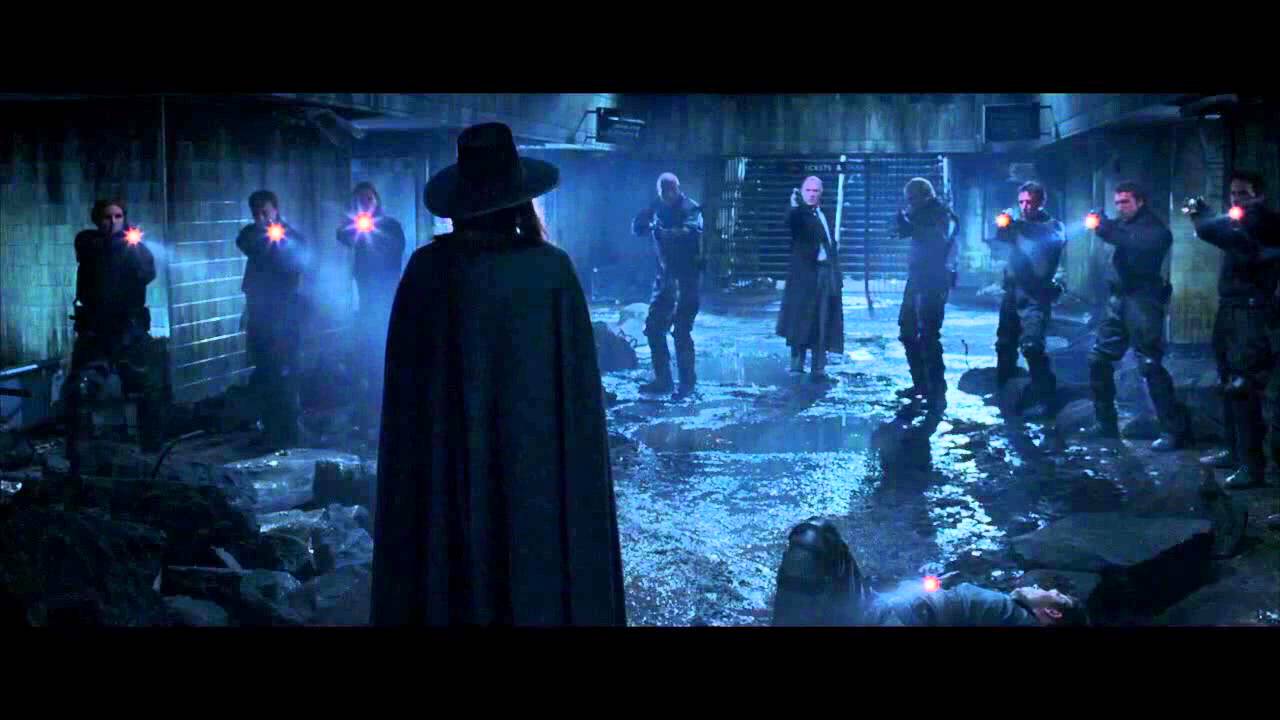 Why? V could've thrown his knives as soon as they started shooting, and mitigated the gun wounds on V that proved fatal.

Before arriving at that basement (what's the correct term?), he could've armed himself with a gun, then use it to shoot back.

In-universe, there are indeed several problems in this scene, but:

Out-of-universe, him fighting back immediately wouldn't have the same cinematic effect. The scene isn't designed to have Creedy face off against an equal (as you would often get in action film finales), but to have him be utterly powerless against a force he doesn't properly understand. V's quote at the end of the scene sums this up:

As I understand it, this is a reference to a plot point in the original source material, where the original V actually does die, and Evey takes his place wearing his mask. Thus, there really is more behind the mask than "just flesh"; the idea causes "V" to (essentially) reincarnate.

From the enemy's perspective, this would feel quite similar to what we see in that scene.

Also as others have noted, V really had no intention of surviving that night.

Beneath this mask is an idea Mr. Creedy, and ideas are bulletproof.

That's kind of sums it up. It was either a plan for selfsacrife (he made himself a martyr) or he really believed he is bulletproof.

I don't have much evidence to back this up but I presume it was to eliminate the possibility of accidentally being shot somewhere he didn't want to be shot. Most law enforcement officers are trained to shoot for the torso because it's the easiest part of the body to reliably hit and has a sufficiently high chance of fatally wounding the target. V expected this and wore a protective layer under his cloak to withstand the barrage of bullets.

But for that protective layer to work, he needed to ensure that that's where the bullets would hit him. He gambled that if he gave them a stationary target, none of them would deviate from aiming at his torso and that they were trained well enough to be able to consistently hit their mark. If he were to have attacked, he'd have become a moving target and exposed unprotected parts of his body to the incoming fire, greatly increasing the chances of him being incapacitated before completing his revenge. For example, his hands might get fingers blown off while trying to throw his knives, or he could take bullets to his back when he turned to attack a particular soldier.

So by focusing his defense on the one spot he expected them to focus on and letting them focus on it uninhibited, he gave himself his best chance at surviving long enough to do what he went there to do. In other words, he used his enemy's strength and confidence against them.

Not the answer you're looking for? Browse other questions tagged plot-explanation v-for-vendetta .

-2
Why did V only wear a steel breastplate instead of something more bulletproof like Kevlar?