Who is the guy killed by the Seal Team and why is he killed?

In episode 'Ignore and Override' (S3E2) of SEAL Team, Jason and the team search a house. The house is empty until the final room. In the final room, there is a man with a gun on the table. When the man goes for the gun, Jason shoots him.

Vadim Tasarov is the man who commits suicide by grabbing the gun. Why did he commit suicide and why did the Seals want him?

There's a screenshot of the screen at :- http://www.imfdb.org/wiki/SEAL_Team_-_Season_3

search for "The unused 92FS in "Ignore and Override" (S3E02) in front of Vadim Tasarov (Milan Milosevic)." for the scene.

Why did he commit suicide ...

It was clearly suicide by SEAL.

(The SEAL team shoots out the lock on the final door with a shotgun and proceed into the room. The room is empty except for Vadim Tarasov at the head of the table with a Beretta 92FS on the table in front of him.)

TARASOV: Every man has an end. I'm fine with this one.

(Tarasov reaches for the gun and Sonny shoots him once in the forehead, dropping him dead where he sat.) 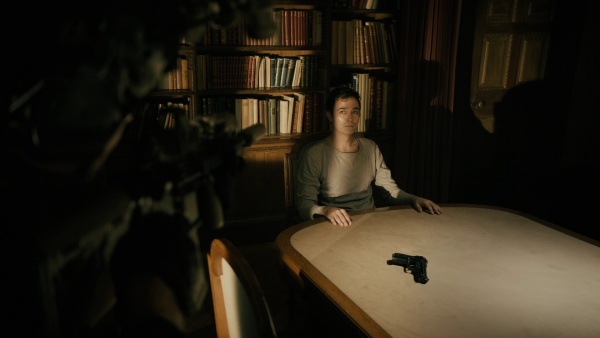 He didn't want to go to prison/Guantanamo/The Hague. While not directly parallel, the situation is analogous to suicide by cop.

There are two broad categories of "suicide by cop". The first is when someone has committed a crime and is being pursued by the police and decides that they would rather die than be arrested. These people may not otherwise be suicidal but may simply decide that life is not worth living if they are incarcerated and thus will provoke police to kill them. The second version involves people who are already contemplating suicide and who decide that provoking law enforcement into killing them is the best way to act on their desires. These individuals may commit a crime with the specific intention of provoking a law enforcement response.
source: Wikipedia

Bravo Team is in Serbia to track down an organization linked to the bombing of multiple American military outposts. The man behind the organization was believed to be Vadim Tarasov who now becomes an HVT (High Value Target aka whale). He was located after Bravo Team captured Peter Malkin at a small airfield. Malkin was a businessman who ran a money exchange known for illicit ties to Tarasov. He gave up information on Tarasov after CIA officer Mandy Ellis threatens to 'leak' false reports of CIA payments to Malkin over the last two years. This information leads them to a villa in the Accursed Mountains in Albania.

BTW, it's Vadim Tarasov (played by Milan Milosevic), not Vadim Tasarov as reported by IMFDB.

Not the answer you're looking for? Browse other questions tagged plot-explanation seal-team .

12
Was Patrice hired for murder or suicide?
5
Is this the grave of a child in Akira Kurosawa's Dreams?
4
Who killed the co-pilot? and How?
6
Why did Colonel Mortimer's sister kill herself instead of killing Indio?
8
Who killed Omi's dad?
8
Who killed Fanny the dog and threw the stone?
26
Cop scene explanation from John Wick (2014)
2
Who killed the Comanche raiders?
4
Who is the guy in the men’s wash room who got killed accidentally?