It's written as 'a pretty huge understatement' and a setup for a comeback.

First, why did Wichita say to Tallahassee 'Maybe you should leave a note' at all?

IRL, in a world without zombies, an honest and polite driver would be expected to leave a note with contact information when causing a minor accident in a parking lot when the other driver is not around. Due to the massive extent of Tallahassee's parking lot damage, 'leaving a note' is a ridiculous extension of what would be a commonplace courtesy in a normal world. This goes to illustrate just how far removed our intrepid heroes are from a normal life. In other words, 'a pretty huge understatement'.

But it's also used as a setup for Tallahassee's biting comeback.

Earlier in the film, Wichita and Little Rock pack their bags one night and leave the White House after Columbus proposes to Wichita. The only explanation was a terse note left for Tallahassee and Columbus. The note had the engagement ring Columbus proposed to Wichita with attached. 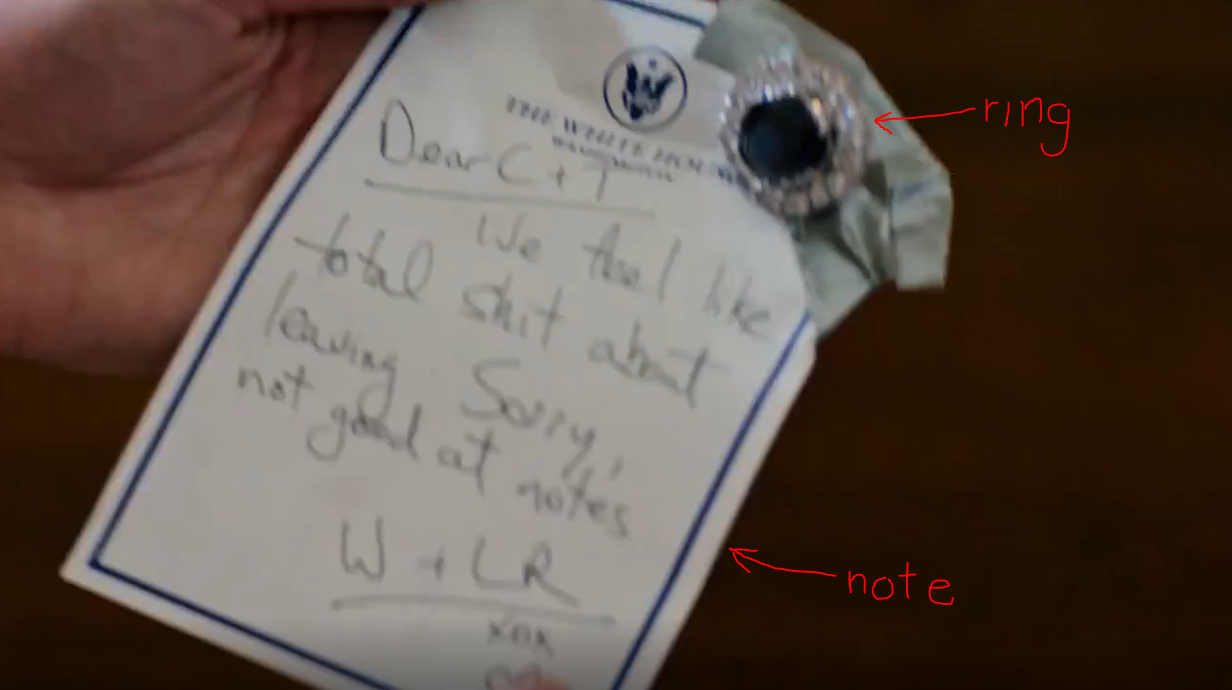 Columbus: Well, yeah. Yeah, 'Not good at notes' is a pretty huge understatement.

A 'Dear John' letter is a socially inappropriate method of terminating a relationship; the modern equivalent would be breaking up by text.

Wichita and Little Rock pick up a hitchhiker (Berkeley) on their road trip and Little Rock ends up stranding Wichita when she takes off with Berkeley. Not willing to fly solo, Wichita makes her way back to the White House to rejoin Columbus and Tallahassee.

Later in the film when Wichita, Columbus and Tallahassee are leaving the Hound Dog Hotel, Tallahassee has trouble maneuvering the monster truck and ends up inflicting more damage to 'The Beast' no. 3.

<Tallahassee knocks down some driveway signage and destroys The Beast no. 3 while trying to drive the monster truck>

Tallahassee's comeback is a direct reference to Wichita and Little Rock leaving the White House in the middle of the night and leaving only a lame note as explanation.

If you recall, earlier in the movie Wichita had left a note for Columbus before she took off with Little Rock. That was her way of communicating difficult topics. She suggested leaving a note to communicate this incident, to which Tallahassee suggested he wasn't one to do such a thing.

11
What did Ocean mean by "You shook Sinatra's hand - you should know better"?
9
Why did Whiplash say "you lose" in Iron man 2?
1
Why did Kate say to Kevin "Maybe it'll happen"?
3
Why did Oleg say "No"?
3
Why did Fran say "You did this"?
2
Why did Mike say "You know we only put one guy outside the service elevator"?
1
Why did Tallahassee say, "That decides it"?
2
Why did Ocean say, "You don't hear Yen complaining"?