Spoilers for Man in the High Castle season 4, beware.

Of course, both are adaptations of stories by Philip K Dick, so it wouldn't be unexpected that the film-makers might acknowledge that in some subtle ways, even if only in tiny easter eggs like the origami model.

I've seen some fan theories about links between the two - the Japanese influences, the origami, the Nazis = Tyrell Corporation, etc, but I have been wondering ever since I watched the ending to Season 4 of Man in the High Castle whether there are any acknowledged intentional connections between the deaths of John Smith and Batty.

The scenes don't look alike, but there's a remarkable similarity in the dialog and the overall emotional pitch of the two. Both are a long-term antagonist at the apparent mercy of their main protagonist; not in itself an unusual denouement - but both have, in effect, given up the fight. Both take place up high, roof vs mountain ledge. Both antagonists eventually take charge of their own demise and the protagonist is not directly responsible for their death. Both have a farewell speech of regret, which start remarkably similarly. The antagonist doesn't reply in either scene, the speech is a monologue… 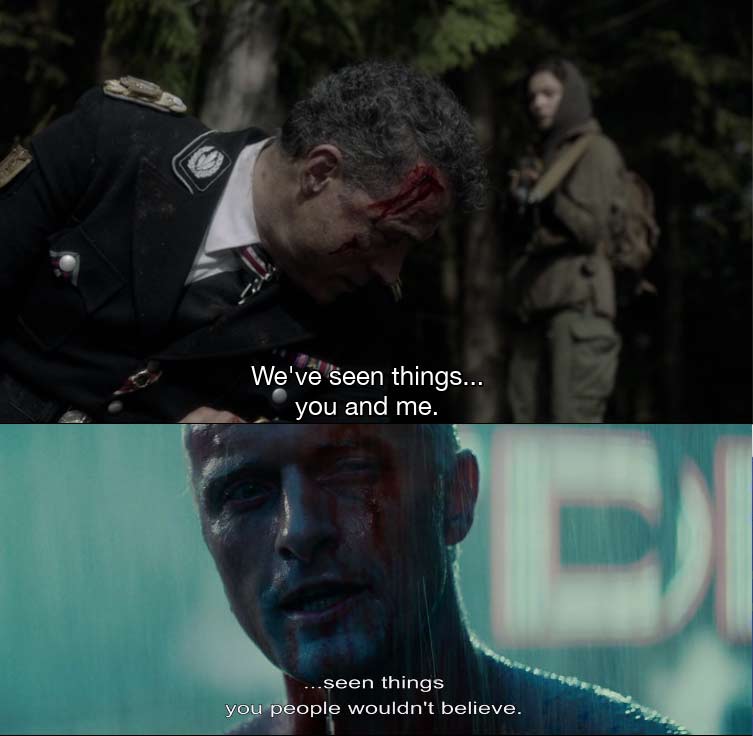 When I heard Smith starting into this closing speech I was already mumbling about C-Beams and the Tannhauser Gate - so much so I nearly lost concentration in an important scene.

Is there any known acknowledgement of the similarity? Was it intentional or am I just reading too much into it?