Are there any references in the movie 'Jason Bourne' that acknowledge the continuity of 'The Bourne Legacy'?

The Bourne Legacy is the 4th film in the Bourne series but without Matt Damon. It tells a parallel story of a different kind of enhanced agent, while referencing the continued developments of characters in the previous three movies (for instance, Pam Landy).

Are there any references in Jason Bourne that require or acknowledge the continuity of The Bourne Legacy?

Unfortunately, I cannot find a complete screenshot of this but here is one of the list, with 'OUTCOME' just out of the of the shot somewhere below 'SPEARFISH... 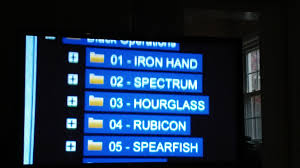 The Outcome and LARX programs are visible on the screen when Bourne looks through the USB Nicky provided in Berlin.

29
Is there any continuity between James Bond movies that have different actors portraying the title character?
7
Why did Matt Damon opt out of the Bourne Legacy?
7
Do I have to watch The Bourne Legacy to watch Jason Bourne?
4
What was Jason Bourne actually doing to the elevators?
4
How did Bourne know that he would be cleared at the airport?
6
What are the references to the original Tron in Legacy?
4
Are there any continuity issues with ignoring Mission Impossible 2?
4
How did the fingerprint of Jason Bourne fall into Russian hands?