How do they avoid the cast and crew leaving tracks around the set of "The Revenant"?

In the 2015 movie The Revenant, Hugh Glass is seen in several shots alone in the snow.

Now, we know that there are several other people out there with him working for the cast and crew. In some of the scenes, we see a ton of snow that is untouched around him.

How does the cast and crew not get their footprints in the snow? How do we not see the tracks of the crewmen running back and forth?

I haven't seen the movie.

I can imagine a scene where they set up the cameras and stuff pointing at a hill. The portraying Hugh Glass get in costume and make up, and walks around the hill out of the area of the camera view.

When the director yells to start, the actor climbs up the other side of the hill and comes into view and then walks down the near side of the hill, leaving a trail of footprints behind him in the otherwise pure snow.

Or maybe the actor walks from right to left in the shot and the camera is at a distance from the actor, and all the crew stay out of the camera angle so they don't make any tracks visible within the image.

Or maybe they have an artificial snow-making machine and huge blowers, and they use the blowers to blow away most of the natural snow and then use the snow-makers and snow-blowers to spread artificial snow around to the desired depth. Then the actor walks through the snow as they​ film.

If the director wants to re-shoot the scene at the same spot, they blow away the artificial snow and lay down another coat of artificial snow to the correct depth, getting rid of all tracks in the snow, and re-film the actor walking through the snow and making tracks in otherwise pure snow.

And they can use this technique over and over again in the same place if necessary, to get a shot that the director thinks is good enough.

When ever a crew person is visible in a movie or TV show that is counted as a blooper. It is something that the crew of the production try to avoid. So the people in charge try to position all the crew members where they won't be on camera during the filming. And if the crew persons might leave footprints in real or artificial snow or mud or something, the director will try to make sure that the crew persons don't step anywhere that will be in the camera view during the filming.

Arranging the film crew so they can do their jobs without being on camera or leaving foot prints or showing their equipment or equipment shadows on camera is one of the requirement that filmmakers have to think about when planning how to shoot a scene.

So I don't know anything about filming The Revenant but those are my ideas about possible techniques used to avoid showing other footprints in the snow scenes.

Curiosity got the better of me so I re-watched this yesterday, paying close attention.

First off, though - any really challenging close-up shot that's not meant to have a million footprints in it already will simply never be walked over by the crew. The actors will walk/ride out there alone, with walkie-talkies to communicate.

There are not many occasions where the snow is actually virgin, crisp, deep and untrodden.

There are many where the brightness of the scene makes it look so unless you pay close attention. This is one with a lot of backlight, so you can see the surface well. 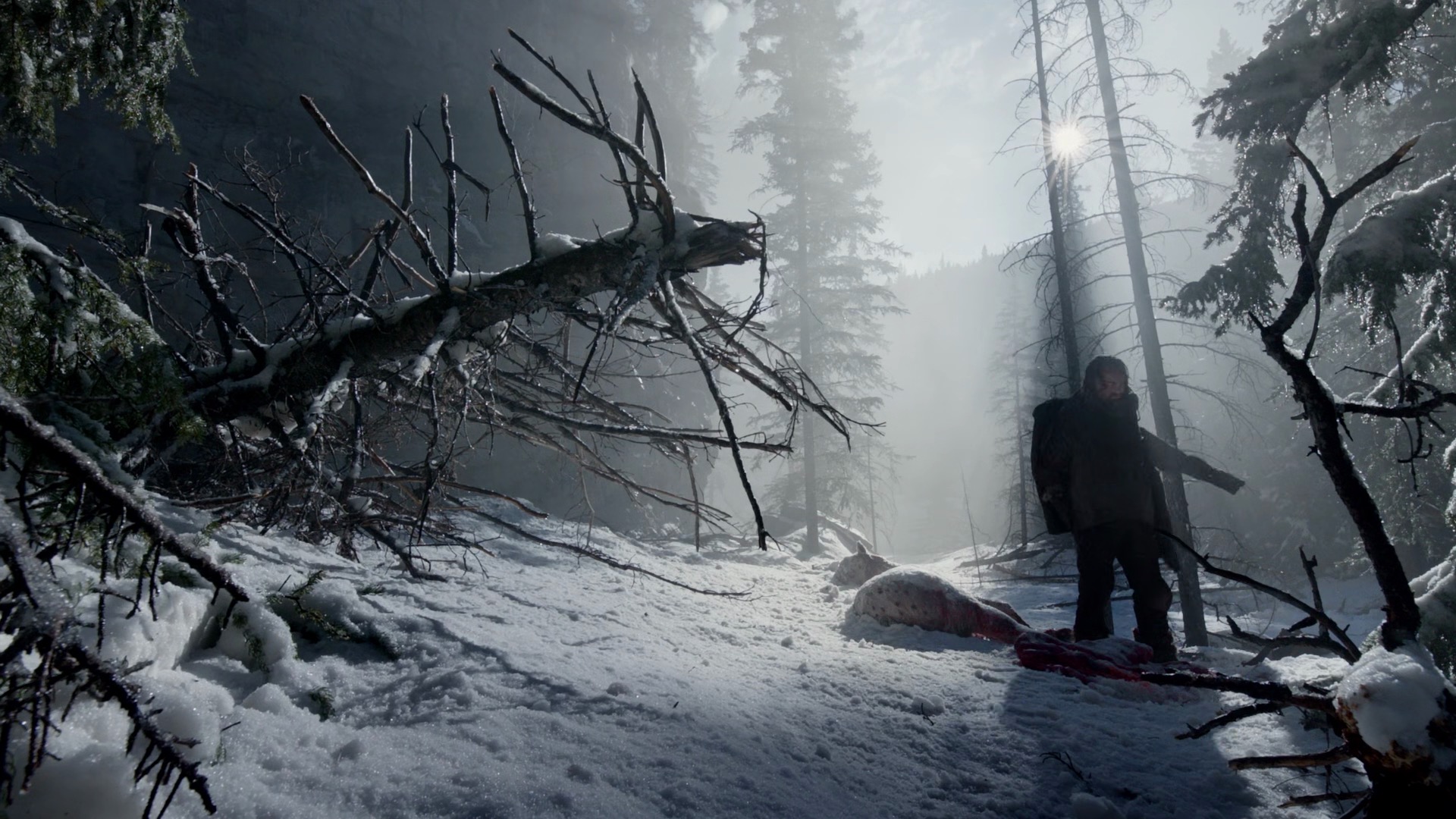 This is similar to the look in many of the shots, day or night. It already looks either trodden or re-surfaced/swept. We can't even be 100% certain that this is actually shot outdoors or is real snow.

In some shots, arial photography (these days, probably a drone) is used; in the shot in the canyon/glacier the surface is hard, icy and barely leaves footprints even from close up. 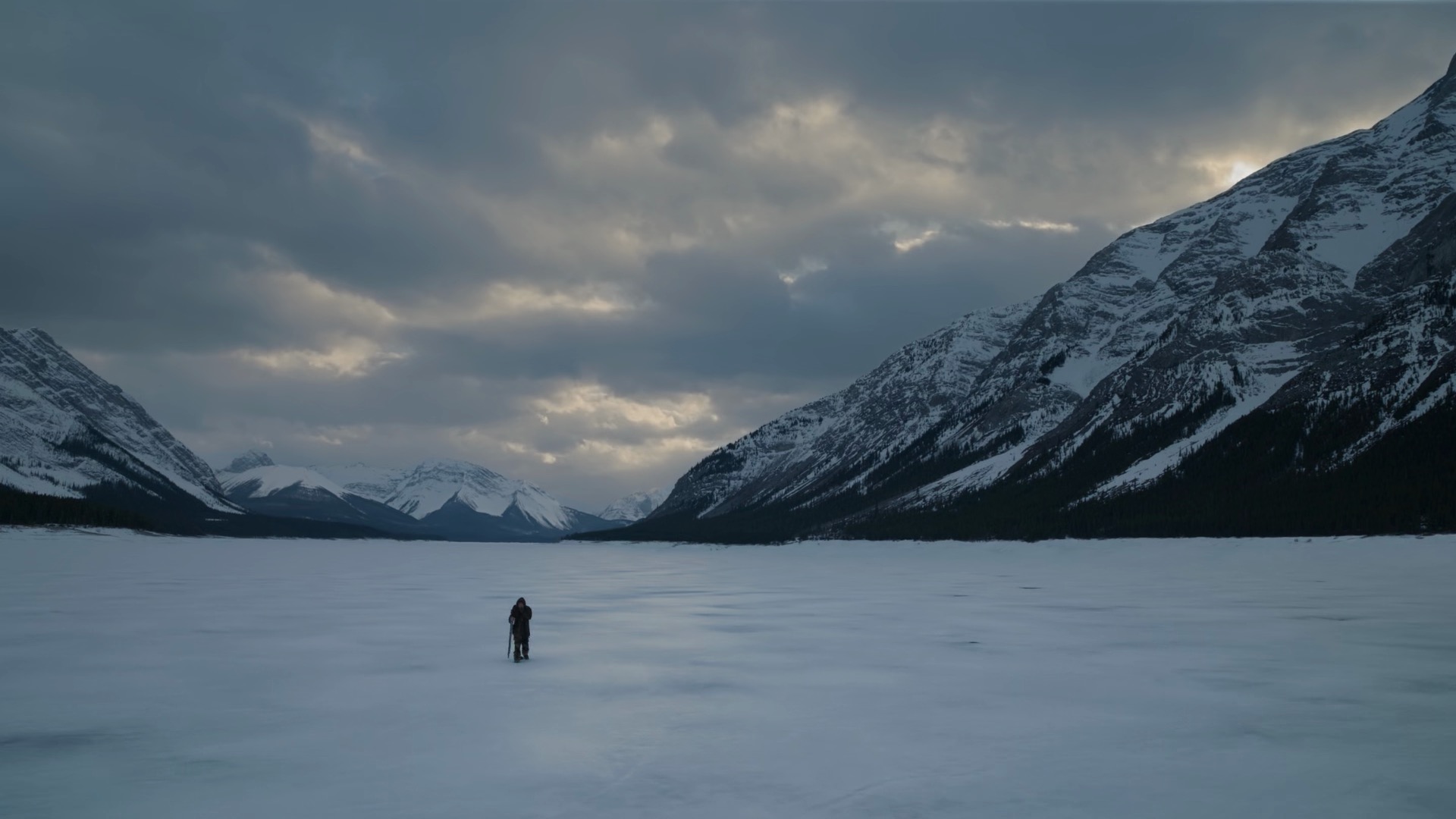 In this long shot, because of the lighting, you can't even see the tracks behind that the horses are making right now, even though they're knee-deep. 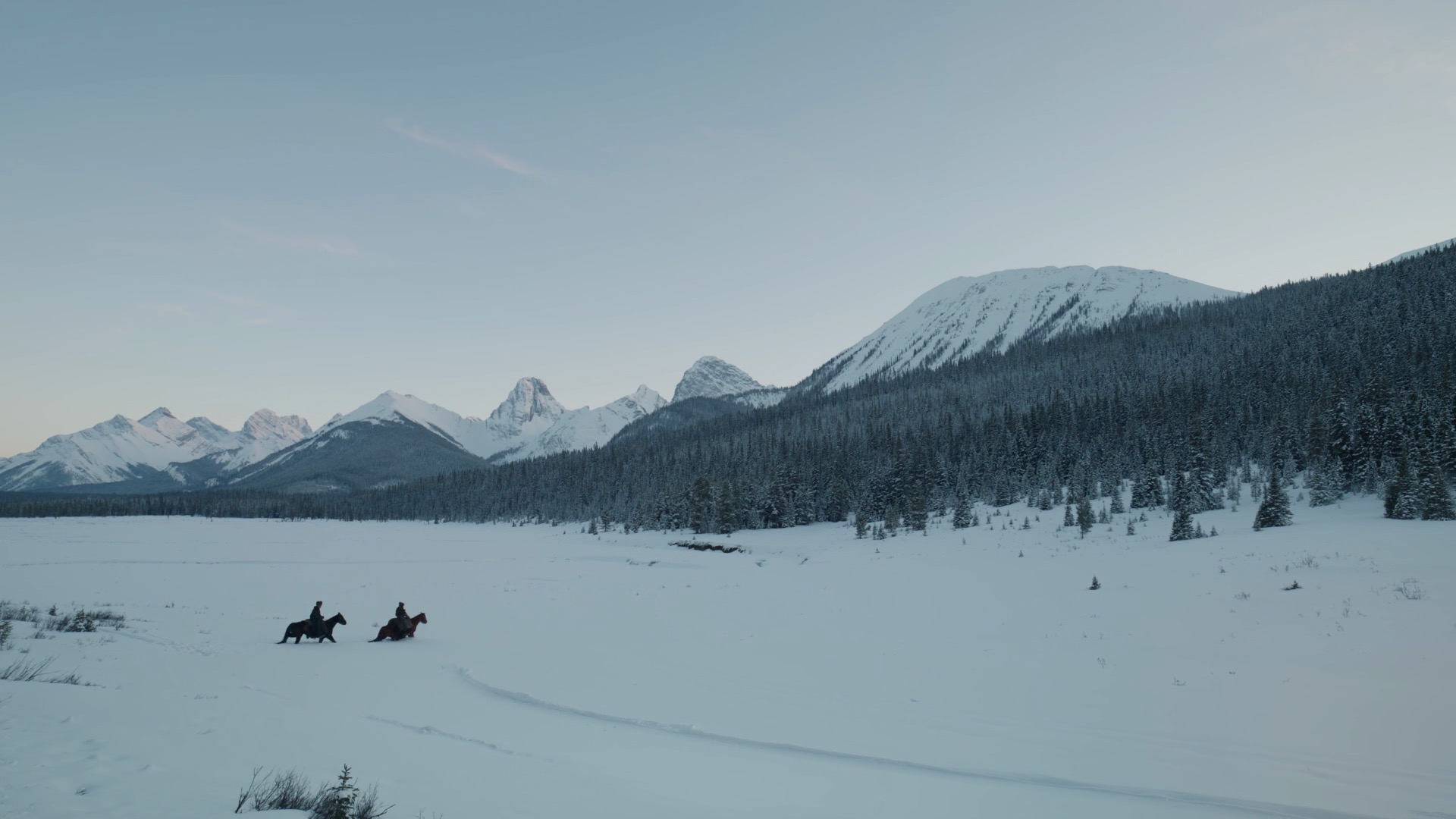 When they move in for the closeup, the entire surface is considerably more chaotic. They're only supposed to be following one horse... 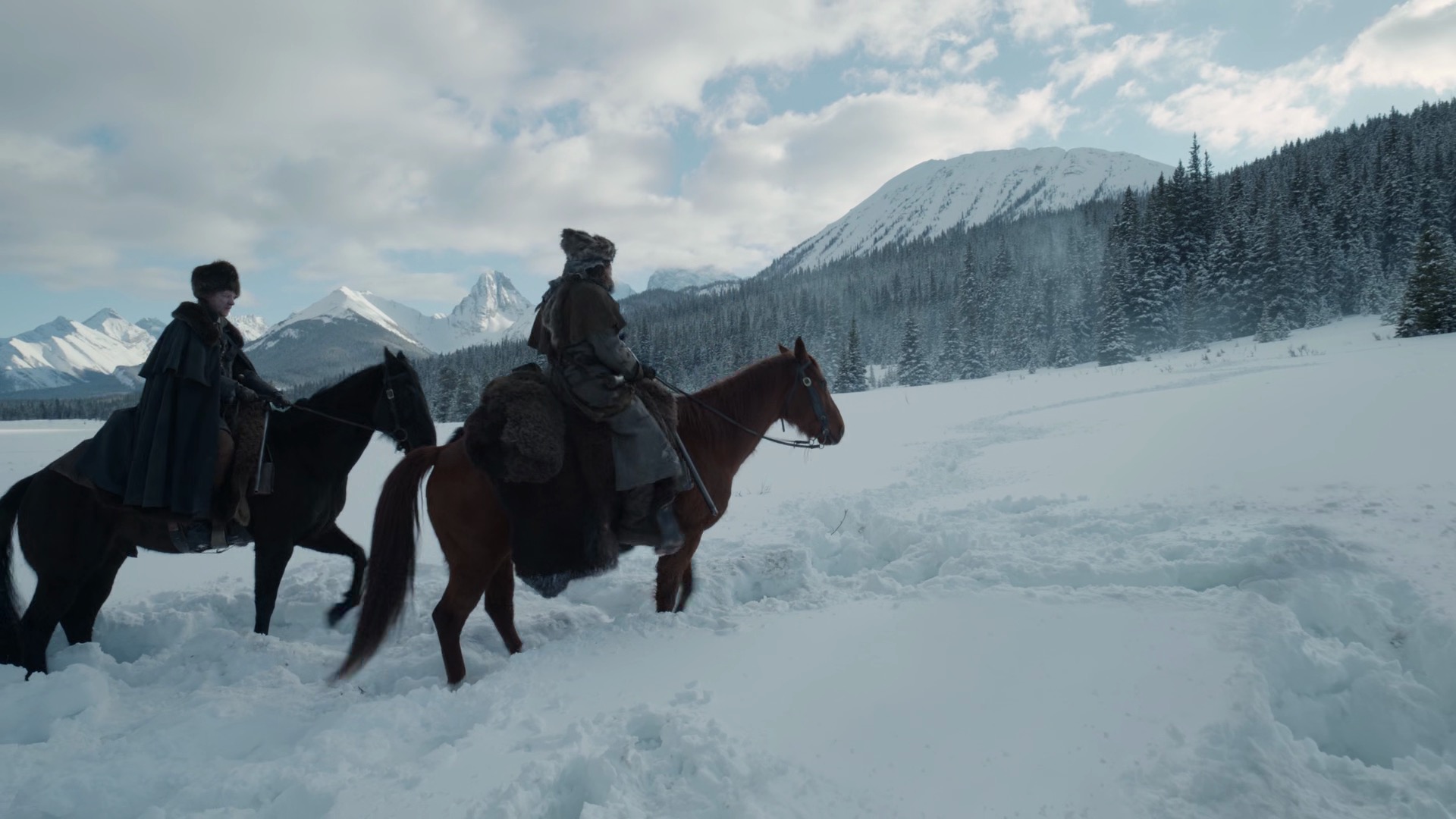 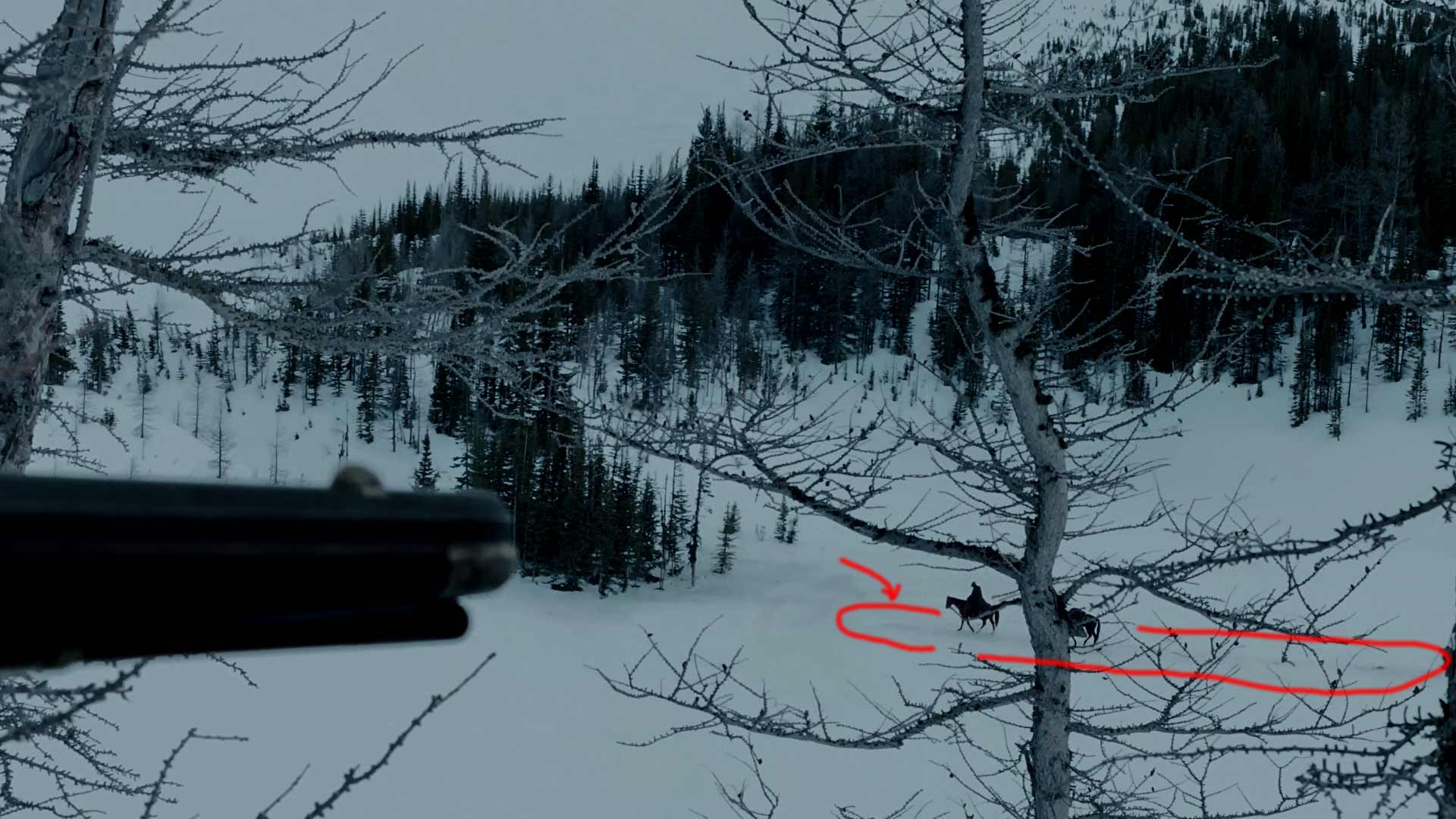 Or in this shot, where he slid and banged into the far bank in the previous take: 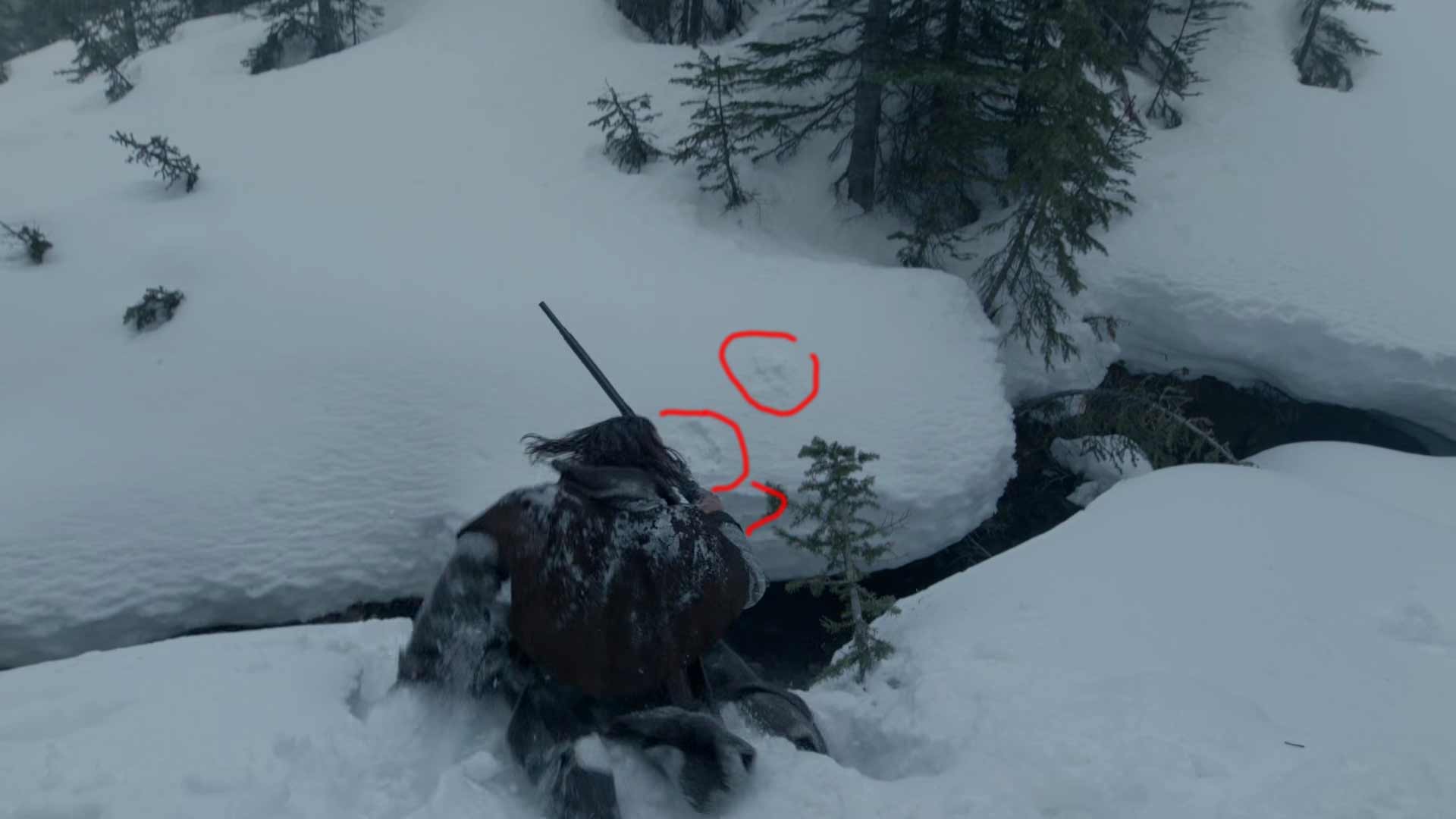 Many of the shots wouldn't qualify for even this scrutiny, because they are camps or overnight rests, where the characters would be expected to have moved around the area already.

Not the answer you're looking for? Browse other questions tagged production the-revenant .

8
Why does America's Got Talent have so many executive producers?
3
How did Leonardo DiCaprio get nominated for BAFTA Award for his role in The Revenant?
27
How was the bear attack scene shot in the movie 'The Revenant'?
2
What is the relationship between "multi-camera" and laugh tracks?
2
How was cast selected in the show Louie?
28
Is Scrubs truly a one-camera show?
20
When recording on film, how does the crew see the footage?
2
What do they say in The Revenant?
4
Real or fake arcade machine in the Foot Clan scene?
27
What exactly is a “European style of single-source lighting, which involved the use of incense burners?”