Is it reasonable to assume that all Yodas have the force?

To date, each Yoda-species life form has been strong with the Force:

Even “The Child” appears destined to become one with the Force.

Is there any indication in all of the other works that this species has innate Force capability?

It's still unclear because we do not know what is necessarily still canon.

As many know, when Disney bought Lucas Film, the former expanded universe including Knights of the Old Republic was demoted to "Legends" so that Disney could have a fresh start with the canon.

In order to give maximum creative freedom to the filmmakers and also preserve an element of surprise and discovery for the audience, Star Wars Episodes VII-IX will not tell the same story told in the post-Return of the Jedi Expanded Universe. While the universe that readers knew is changing, it is not being discarded. Creators of new Star Wars entertainment have full access to the rich content of the Expanded Universe. For example, elements of the EU are included in Star Wars Rebels. The Inquisitor, the Imperial Security Bureau, and Sienar Fleet Systems are story elements in the new animated series, and all these ideas find their origins in roleplaying game material published in the 1980s

However, as mentioned, it was never about getting rid of it completely, but rather recontexualizing some of it back into their new canon, as Star Wars: Rebels reintroduced Thrawn and Kylo Ren has elements of Jacen Solo...

The Rise of Skywalker then partially re-canonized The Knights of the Old Republic, as Exogal featured statues, some of which seem rather similar to Darth Nihilus, but more over, the Sith Troopers were divided into Legions and were assigned numbers, but also Sith Names. Darth Revan is one such name.

However, even though we now know some of these characters exist, we don't know if their stories are identical to Legends, or if some changes will be made, that is, if new content for them will be produced? But in any case, the canon for either KOTOR or Yoda's species could still be different than how it was previously presented.

But getting back to your question, I bring up Knights of the Old Republic, because it presents another Jedi in Yoda's species, Vandar Tokare, who could in theory still be apart of the new canon thanks to The Rise of Skywalker opening the door to KOTOR, and therefor would continue to conclude that the species may be innate with force sensitivity: 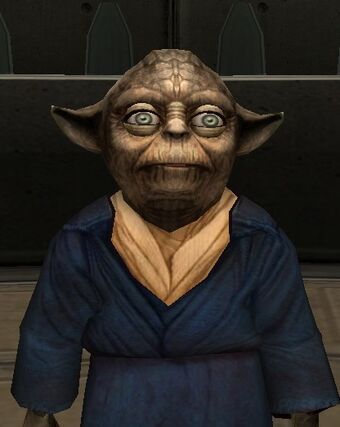 Vandar Tokare was a male Jedi Master of Yoda's species who was the head of the Dantooine Jedi Enclave Council during the Mandalorian Wars and Jedi Civil War, holding a seat on both the Jedi High Council and the Council of the Jedi academy during this time span. He was friends with fellow Council member Vrook Lamar, usually having the last word in their frequent disagreements, most notably on the choice to train Revan once again in the ways of the Jedi after his fall to the dark side of the Force. During the Conclave at Katarr, Tokare was killed along with many survivors of the First Jedi Purge and the entire Miraluka colony after the Sith Lord Darth Nihilus drained the Force from the planet's surface.

Note: I would also like to point out that The Child could be any known adult male character of Yoda's species as per Star Wars: Rebels via The World Between Worlds provides the possibility of time travel.

Not the answer you're looking for? Browse other questions tagged character star-wars .

5
Who brought balance to the force?
13
Did Yoda appear in Star Wars The Force awakens?
4
Confused about the Resistance base in The Force Awakens
4
Did Jabba the Hutt force himself on the captured Leia?
8
Does Finn know the ways of The Force?
15
Did the young boy move the broom through the Force?
1
Why did all the Characters in “Hugo” have English Accents?
2
Is this scene with Djarin and the Child an allusion to a scene in E.T.?
7
Is there any John Williams-derived music in “The Mandalorian”?