Were the Knights of Ren always working for THIS character?

During the course of the sequel trilogy viewers were introduced to a new group of characters called, The Knights of Ren. 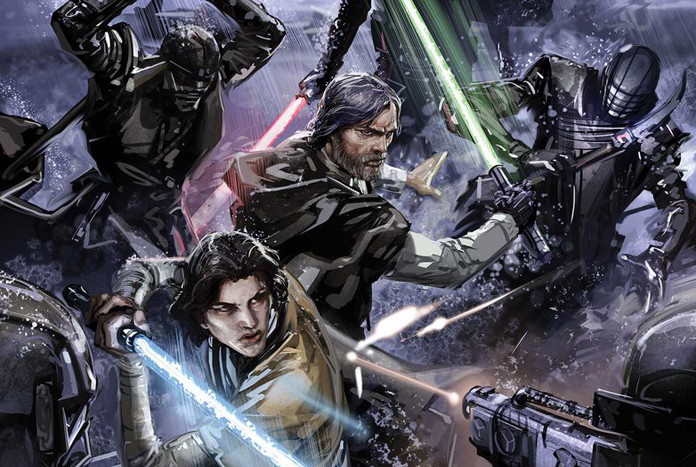 We came to understand (The Force Awakens, The Rise of Kylo Ren Comic) that after Ben Solo turned to the dark side and became Kylo Ren, he was inducted into the group and seemingly became their leader, as Snoke once refers to him as "The Master of Ren", and therefor it appears both were answering to Supreme Leader Snoke. Also The Last Jedi mentions they were on a mission, being absent from the film.

But the final film of the sequel trilogy, The Rise of Skywalker, very ambiguously gets into notions of Palpatine's and potentially, "The Sith's" return...

Early in the film Kylo Ren and the Knights of Ren seem to be working together, as Kylo finds the first Wayfinder (Sith Holocron) with their help and then later, they capture a well-known character that plays into what Kylo Ren was trying to do to get closer to Rey.

But once Kylo Ren returns from the Dark Side and once again attempts to be Ben Solo, he goes back to Exogal presumably to help Rey face Darth Sidious. However, once he arrives on Exogal, he must face The Knights of Ren, before being able to enter the deeper chamber and throne room.

So does this mean that The Knights of Ren were always aligned with Darth Sidious?

So does this mean that The Knights of Ren were always aligned with Darth Sidious?

When Kylo Ren and Darth Sidious were speaking on Exogal, he explains how he had created Supreme Leader Snoke; i.e., that Snoke was no more than an extension of Sidious himself (presumably because of Sidious' physical limitations due to being in such poor health).

Once Kylo Ren abandoned the Dark Side and reverted back to being Ben Solo, the Knights of Ren appear to have rendezvoused to Exogal to guard Palpatine's chamber so that Ben Solo and/or anyone else wouldn't interfere with Darth Sidious' interaction with Rey.

Not the answer you're looking for? Browse other questions tagged character star-wars the-rise-of-skywalker .

11
Who is Supreme Leader Snoke?
10
How did Supreme Leader Snoke seduce him to the Dark Side?
3
Was this how the Knights Of Ren were formed?
2
Was Luke referring to Kylo Ren or somebody else?
14
Who was Kylo Ren fighting against in order to acquire the first location cube?
7
Why was this character uncredited?
3
Was Rian Johnson told the answers to The Force Awakens’ mysteries?
6
Why did Darth Vader not try stopping the space shuttle at the end of Rogue One?