Did the concept of Force Projection exist in Star Wars universe before the Last Jedi movie?

Luke skywalker projected himself in front of Kylo Ren using his Jedi powers in the movie "Star Wars: The Last Jedi". Did this concept of Force Projection exist in Star Wars universe before the Last Jedi movie?

Yes, Rain Johnson had mentioned once that he had known the ability existed before in other material, but it had yet to ever be shown "on screen."

"I've heard something like this described as a Force power, like actually projecting a vision of yourself elsewhere. But we've actually never seen it in the movies. It's something a little different. This could be a way that he could win this sequence." - Rian Johnson

Doing further research, I found that book that references many force abilities, including something similar to this one, that stems from a book, The Jedi Path: A Manual for Students of the Force.

And From Digital Spy:

His goal achieved, Luke awakens, only to fade away like his Jedi masters before him.

One complaint has been that Rian Johnson made up new ways to use the Force to fill in the gaps in his story, but the writer-director has something to show you (via The Mary Sue).

The book he is holding is The Jedi Path, which was first published in 2010 and describes the different Force abilities that a Jedi can master. It doesn't seem to be canon anymore, but it shows that the projection ability pre-dated Johnson joining the Star Wars universe.

This book is no longer considered "canon" after Disney's acquisition of Lucas Film, but does prove that the idea of Force Projection did exist prior to Rian Johnson incorporating it into The Last Jedi. 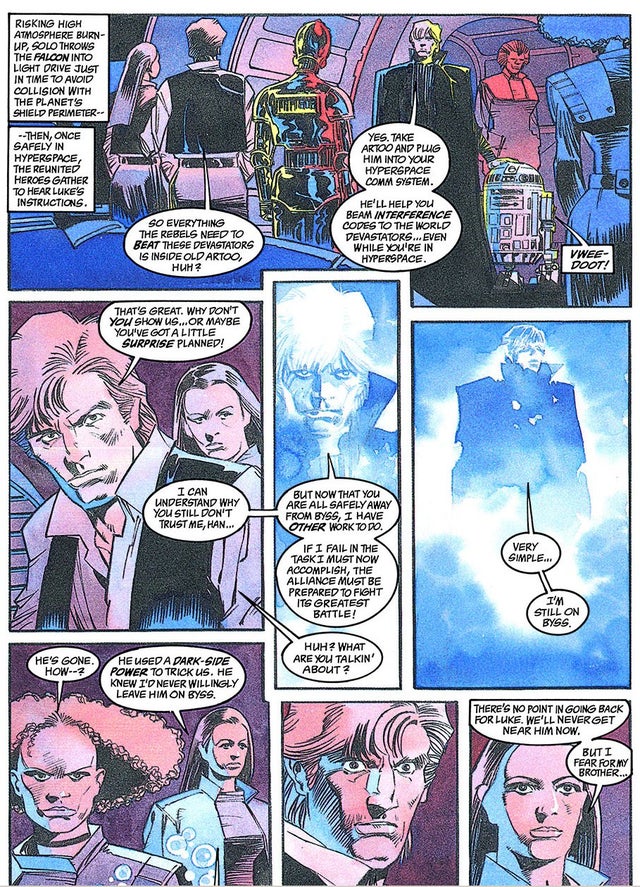 The power also existed earlier with Luke specifically in the former EU (now "Legends") during the Dark Empire Comic series (see image above) & I believe again in book, Legacy of the Force: Fury.

10
Who is Lor San Tekka?
24
What does the prophecy exactly say in the Star Wars saga?
12
Why do the golden dice disappear in Kylo's hands?
12
Why would Luke give away this piece of information?
9
Was Ahch-To such a mystery?
140
Is the title "The Last Jedi" singular or plural?
45
Who is the titular "Last Jedi"?
9
Was using the Force Projection ability responsible for what happened to Luke?
2
Was Luke referring to Kylo Ren or somebody else?